Will McCamley on target in Under-19s' latest fixture

Huddersfield Town Under-19s winger Will McCamley is hoping he can continue to add goals to his game on a consistent basis after scoring in the 5-2 victory over Walsall at Canalside on Tuesday.

McCamley, who also bagged a brace in the original fixture between the two sides back in September, coolly slotted home the Young Terriers’ second goal of the afternoon.

That was the 19-year-old’s second goal in as many games, and he was quick to stress how important scoring regularly is for a player in his position.

“It is very important. Every game that I don’t score I come off the pitch disappointed, no matter how well I have played, so I am buzzing to get two in two. 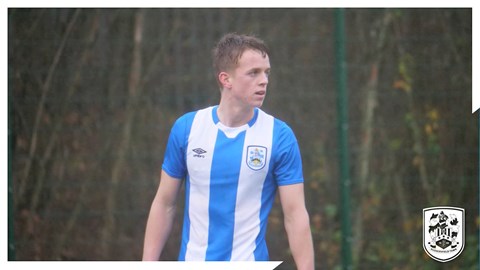 “I want to keep playing consistently well, keep scoring goals and keep on assisting. I will carry on working hard and hopefully good things should come.”

The Young Terrier was one of several players who featured in unfamiliar positions during the second half, as he played in a central attacking midfield role for the first time this season.

McCamley revealed that he enjoyed his new role and hopes to keep on developing wherever he is asked to play on the pitch.

“It’s different and very new for me. I have been a winger for as long as I have played football, so it is just all about learning.

“I thought it was a good experience today and hopefully I will keep on improving.”

Tuesday afternoon’s victory was Town’s fourth in five Central League Cup matches and McCamley was pleased to register another win in what was a difficult fixture.

“It was a tough game. They were a very physical team and they got around the pitch well, but it was a good win for us and there were some positives to take out of it.

“It was disappointing to concede two silly goals. But I think it shows how hard we work that we were able to make it a comfortable end.”