Huddersfield Town’s Under-19 side sealed an impressive victory over the equivalents from Spanish La Liga club RC Celta de Vigo in the second and final game of the week-long stay in Portugal on Wednesday evening.

An uneventful first 45 minutes, in which Town still had the better chances, gave way to a second-half featuring more tempo, drive and battle, with Jackson’s late strike settling a tightly contested match.

On the back of Monday evening’s 1-1 draw with Portuguese side SC Braga, this performance and result capped off a great week for Mark Hudson’s youngsters, who will continue to train in the sun before returning to England on Friday. 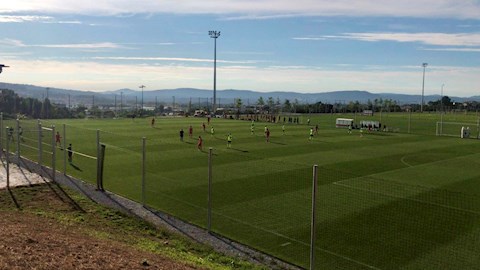 ‘Huddy’ made four changes from the side that started the draw with Braga two days’ earlier as goalkeeper Gabriel Rosario; defenders Romoney Crichlow-Noble and Demeaco Duhaney and striker Kit Elliott started.

It was 27 degrees as Town began the game in decent fashion, quickly creating the first of the half’s two real chances from an early corner. Striker Elliott, the 17-year-old former Chelsea and Crystal Palace man, got his head on the end of the set-piece, only for Celta to clear the ball off the line.

Another set-piece presented Town with the second chance of the game as midfielder Isaac Marriott headed just wide from a free-kick down by the corner flag.

Set pieces looked the most likely source of a breakthrough at this stage and Celta forced two quick corners of their own, but first Matty Daly – starting his second game since injury – and then Jackson cleared.

Next, centre back Rarmani Edmonds-Green stepped out into midfield and played right back Demeaco Duhaney into space with a good pass. The full back’s cross was good, but nobody could get on the end of the delivery in the middle.

Town continued to push, and the half’s best chance fell to striker Elliott around the half-hour mark. Centre back Romoney Crichlow-Noble’s long, raking pass put the forward through on goal, but the Celta goalkeeper did well to make the block and keep the score level.

At the other end, Town’s high defensive line caught the Spaniards offside from a dangerous set-piece delivery as the half ended.

Amazing result today for the #YoungTerriers against @CeltaVigoUK u19’s To come and play two top European academy sides is excellent, but then to compete and get results and show what the Terriers are about is even better. #topgroup #Terriersabroad

Dom Tear had come on as an early substitute after 16-year-old winger Jaheim Headley was forced off due to a kick and his pace and direct play caused Celta problems as the second-half got under way. He forced the goalkeeper into early action twice; first he had to smother his useful low cross before he had to spring from his line to smartly smother captain Scott High’s through-ball ahead of the winger.

The Young Terriers were in control at this stage and got the goal they were looking for with around five minutes of the contest remaining. A ball over the top from midfielder High gave Jackson, playing on the wing, the chance to run through and he cleverly lobbed the ball over the approaching goalkeeper, with the ball kissing the post on its way into goal.

The game ended on a sour note for the Spanish side as a defender took strong objection to a good challenge from High right in front of the Town dugout, reacting in unsavoury fashion and earning a straight red card.

With a man advantage, Hudson’s men kept the ball well to see out the game.