Learn about two Egyptian trialists over 70 years’ ago

- Ramadan Sobhi is the first Egyptian to play at Town
- However, there were two trialists over 70 years’ ago
- Learn about the duo that are part of Town’s rich history

Ramadan Sobhi became the first Egyptian to play for Town in competitive action at Manchester City earlier this season, but he’s not the first player from that country to arrive at the Club!

With Town looking forward to starting the 1946/47 campaign back in the regular First Division following World War II, the Club had some 60 professional players and over 30 amateur players on its books.

However, this did not stop Huddersfield Town’s scouts eyeing potential signings – and two trialists would prove to be the most exotic trialists seen at Leeds Road to date.

Their names were Mohamed el Guindy and Abdul Kerim Sakr, both of whom were playing in the Cairo League, Egypt’s top division.

El Guindy was aged 23 and described as ‘a top flight inside-forward’ having played for Al-Ahly Sporting Club. He was hoping to start a new life in Yorkshire where he planned to continue his marine engineering studies at Leeds University.

Sakr played for King Farouk FC of Giza (later renamed Zamalek SC) and was ‘hoping to study physical culture’ during his time in England.

Both players’ recent football credentials were impressive. Sakr’s Club had just completed a hat-trick of Cairo League title wins, whilst El Guindy’s club meantime had been Cairo League champions in 1942 and 1943. 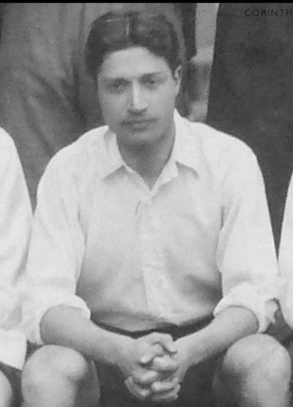 Things looked promising and, having arrived in England on 25 May 1946, they contacted top-flight Huddersfield Town to ask for trials. Invited down to Leeds Road, the pair initially made a good impression on the coaching staff and did well enough during training to be offered amateur terms. Unfortunately though, it appears that the duo found the transition to the UK more difficult than expected, and reportedly were soon feeling so homesick that by the end of June they had decided to return to Egypt.

However, it is possible that politics may have also played a part in their decision to leave, as at the time the UK and Egyptian governments were involved in an escalating dispute over the continuing post-war presence of British troops in the Suez Canal Zone.

Whatever their personal reasons, El Guindy and Sakr quietly packed their bags and left Yorkshire giving very little notice. Disappointed Town manager David Steele summed the situation up in a press interview on 9 July, telling reporters that, “Everything possible has been done to persuade them to stay, but I understand they have already sailed for Egypt. They have impressed during training and will remain on the Club’s books for the time being, but I consider their return to Huddersfield doubtful.”

The canny Scot was to be proved correct. The Egyptians had indeed walked, and it was to be another 72 years before a countryman of theirs was seen in a Town shirt again!

This article first appeared in Saturday's edition of The Terrier, Town's match day programme - priced at just £3.50 every match day