Hart secured a place in club folklore as he proudly led the Terriers to glory in dramatic circumstances on this day 41 years ago in a 2-1 victory over Hartlepool.

The Leeds Road win, in front of 16,807 fans, ended Town’s five-year stint in the Football League’s bazsement division and sparked an upturn in fortunes for the Club.

And Hart, now a vicar in the West Midlands, believes fans will always have affection for a free-scoring side that galvanised with a club faced with non-league football in the mid-70s.

“In footballing terms, Town were my first love and therefore it’s not something I easily forget,” Hart told htafc.com.

“There will always be a place in my heart for Huddersfield Town Football Club because I grew up there.

“And there’ll always be a place in Town fans’ hearts because Mick Buxton’s team revitalised the Club, put smiles on faces and put a spring in the step of the town.

“That day we beat Hartlepool to clinch the Fourth Division title still means a lot to me and I’m sure it will be remembered very fondly by every Town fan that was there at Leeds Road that day.”

Town, of course, came from behind to beat Pools 2-1 thanks to Ian Robins’ second-half goals right in front of the Cowshed.

And Robins’ heroics not only ensured Town pipped Walsall to the title but also took his team’s goal tally to a record-breaking 101 goals in 46 league games that season.

“Mick Buxton took the Club by the scruff of the neck when he took over as Manager in 1978,” Hart said.

“And that tough streak was just what we needed because the Club had been in decline throughout the 70s.

“There had been a number of managers and a number of approaches tried and failed and lots of players came and went.

“Plus, there was a development of a sort of complacency in the old Fourth Division as discipline went out the window.

“But there was no chance that Mick was going to allow that to continue. He got rid of a few players, brought new faces in, created a system and a style he wanted us to stick to.

“It was always attacking football and we were always on the front foot, hence the 101 goals.

“Mick wouldn't allow anything less than 100 per cent commitment to the cause from everyone – on and off the field.

“And that was the secret to our success in beating Walsall, who had been the pacesetters, to the title.”

As well as being Town’s midfield lynchpin alongside Mick Laverick, Hart also weighed in with a few goals.

After getting Town off to a winning start to the season with a goal in 2-0 home win over Aldershot, he scored twice in a 7-1 thrashing of Port Vale.

He chipped with a winner in a 2-1 victory Stockport but also recalls an own-goal that put already promoted Town on the back foot against Hereford.

Town bounced back that day thanks to goals from Steve Kindon and Peter Fletcher (2) to seal a 3-1 win to turn up the pressure on Walsall.

Buxton’s team went top courtesy of a 4-2 win over Torquay as Walsall faltered in the penultimate round of games, losing 3-0 at Wigan.

But Hart believes that the 2-1 win over Hartlepool epitomised everything that was good about Town under Buxton.
Town had to overturn a 1-0 half-time deficit to win while Walsall were losing 4-2 at home to Newport.

“By the time Easter had come around Walsall had been promoted but they probably took their foot off the gas once they drew at our place,” Hart said.

“They relaxed a bit and lost one or two matches including the last game of the season against Newport, which opened the door for us.

“In contrast there wasn’t a chance that would happen at Huddersfield, all because of Mick Buxton – he kept us going right to the very end.

“Against Hartlepool, I remember us having to be patient; to play what they call a waiting game.

“Although we were on top and had chances, they put up a good fight and it took us a good while to overcome them.

“The thing I remember most is that it just wouldn't come but Ian Robins came to the rescue.

“It’s strange but I remember showing off the trophy on the Town Hall balcony more than the celebrations that followed the Hartlepool game.

“That’s because all the emotion swirling around Leeds Road and the lap of honour have blurred my memories.

“Our Town Hall celebration might not have been as big as Liverpool returning home with the Champions League trophy but it was a small but perfectly gathering.” 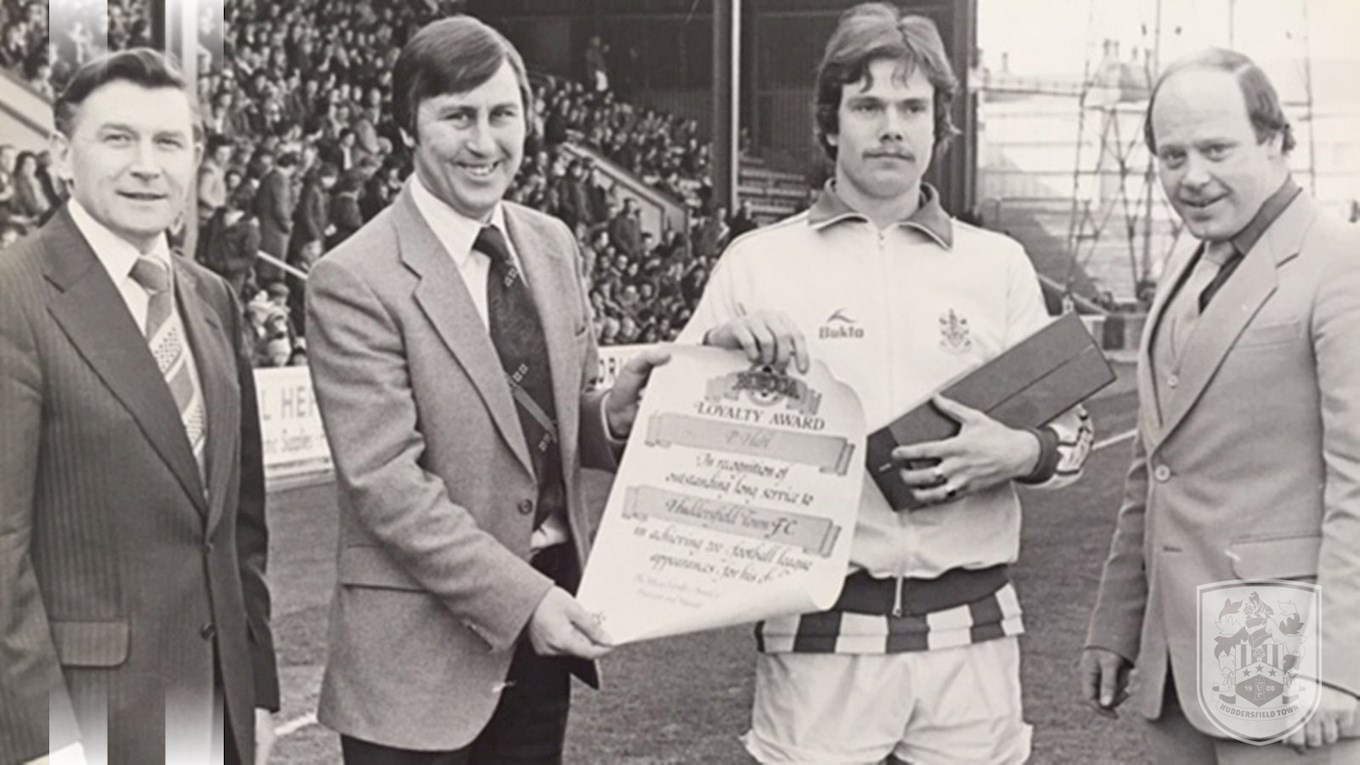 Hart, who hails from Mexborough, South Yorkshire, came up through the ranks at Town and thrived under the tutelage of Robin Wray and then first team manager Ian Greaves.

He played 210 times for Town before moving to Walsall in 1980 and making almost 400 appearances for the Saddlers.

“I had fantastic memories of my first few years at the club as an apprentice and then as part of a very good youth side,” Hart said.

“It was a side, coached by Robin Wray, that reached the FA Youth Cup final where we lost to Tottenham before getting to the semi-finals the year after.

“I had some great team-mates and I made some really good friends and we had a fantastic side.

“Then there was the downturn in fortunes, five years in the wilderness, but Mick came in and restored the club’s fortunes.

“They remember it as the turning point in the club’s fortunes after a rotten few years.

“That’s why Huddersfield means so much to me and I’m still very proud to have represented the club and won a trophy. It will always be very special to me.”