The defender won the accolade for the second time this season, fighting off competition from Alex Vallejo, Pipa and Lewis O’Brien.

Toffs recently spoke on Huddersfield Town’s Preview Show on improving his own game, increasing his interceptions from 1.2 per game to five or five a game!

Francis Ward from Huddersfield and 14-year-old Aza Mitton voted for the defender and were randomly drawn out to win a replica signed shirt and a signed team photo respectively! 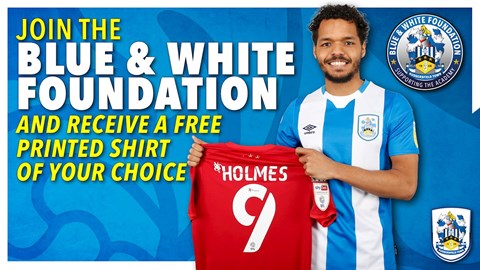 FREE PRINTED TOWN SHIRT IF YOU JOIN THE BWF FOUNDATION

- During Covid-19 the On the Move prize money is reduced to a share of £850 plus rollover that increases from £50 each week
- Week 52 Jackpot of £20,000 plus 10 x £500 runner up prizes
- £5 off your Season Card
- 10% off all retail merchandise every Tuesday
- Player of the Month competition to meet your chosen player
- Exclusive limited edition offers