Town battled valiantly at Old Trafford, and after holding their hosts to a goalless stalemate at the break, goals from Romelu Lukaku and Alexis Sanchez in the second half saw Jose Mourinho’s Manchester United run out 2-0 victors.

Town had a few good chances of their own, but Belgian striker Lukaku and new signing Sanchez struck within 25 minutes of the second half restart to keep all three points across the Pennines.

Town’s starting eleven for a first visit to South Manchester since 1972 consisted of three changes; Club captain Tommy Smith took up his familiar role at right-back, with Collin Quaner and Rajiv van La Parra rounding off the changes ahead of Aaron Mooy and Chris Löwe as Town adopted a 4-5-1 shape. Florent Hadergjonaj pushed into central midfield alongside Philip Billing and Jonathan Hogg, providing extra athleticism to press United’s holding duo of Scott McTominay and Nemanja Matic.

Town started off suitably well, with the pressure on McTominay, Mata and Matic looking well structured. United would force an early chance with a corner, where Christopher Schindler cleared without hesitation from Chris Smalling’s knockdown.

Jesse Lingard followed up by firing straight at Jonas Lössl having broke through on goal despite a relatively fortunate deflection to open up the clear path.

Town were hunting impressively and denied the Reds hardly any space to work with. Instead, Florent Hadergjonaj took advantage of his tenacity by excelling up the right-flank before crossing to the arriving Rajiv van La Parra at the far post, where the latter would rise highest, but fail to make adequate contact to force the header goalwards.

Tommy Smith was on hand perfectly at the front post at the other end to once again hastily clear Luke Shaw’s low cross, albeit after excellent marshalling from Collin Quaner, who had retreated and covered well to halt Shaw’s progress to an effective intent.

With the ball themselves, Town looked accomplished; but still had to soak up expected pressure from Jose Mourinho’s side. Jonas Lössl displayed superb reflexes to keep out Alexis Sanchez on his home debut with a great diving save to the right.

Town’s defensive resistance had so far paid dividends. The combination of Jonathan Hogg and Terence Kongolo scampered back with urgency to block Antonio Valencia’s delivery after a neat one-two with Sanchez.

Lingard again found himself with space this time inside the Town penalty area after a mis-communication allowed the attacking midfielder in around the back, and despite rounding Jonas Lössl at the first attempt, the Dane sprang to his feet to smother the resulting chip towards the cavalry of Lukaku and the relatively busy Alexis Sanchez.

As the interval loomed, David Wagner’s men more than took the game to the hosts. Sanchez was robbed off possession on halfway, and as the impressive Hadergjonaj sprayed wide to Tommy Smith, the Captain continued to play an incisive pass through a gap towards Collin Quaner.

Collin aimed to Laurent Depoitre, and the Belgian rose like a salmon to head against Rojo and win a corner for the Terriers.

A succession of Blue and White attempts would come as a result of that corner, with all efficiently diverted away from danger. Nonetheless, United’s pacey threat on the counter reared it’s head as Lukaku and Mata sprinted from deep, but as usual throughout the first period, Town’s discipline when keeping the shape and returning to make necessary challenges was outstanding to retrieve possession before a potential goal-scoring opportunity could unfold.

One of the pivotal moments of the contest from a Terriers perspective was the importance of not conceding early into the second half. Tommy Smith led the way with exceptional heroism in a bid to block Jesse Lingard’s shot off a mazy surge into the box, with Terence Kongolo following suit by firmly denying Sanchez’s clean strike from the edge of the area.
United continued to probe, with Christopher Schindler churning out two vital blocks, firstly from Valencia’s wide-right near-post cross, then timely sliding away from Shaw’s delivery on the other flank.

The dominance would take its toll, however, and the Red Devils took the lead through Romelu Lukaku.

Nonetheless, Town weren’t fazed at the task to equalise. Hadergjonaj’s burst down the right resulted in Collin Quaner receiving a cut-back in an inviting amount of room mid-way inside the home side’s territory. United got back in numbers, which saw the tempo of the attack reduce in what occurred to have been a good chance to pour forward.

Just as Town sensed that a leveller may well have been on the cards, United’s lead doubled.
Alexis Sanchez was adjudged to have been clipped in the box by replacement Michael Hefele, to which referee Stuart Attwell awarded a spot-kick. The Chilean took responsibility, but would only grab his debut goal and United’s second at the second time of asking, tapping into an open goal after having his initial penalty attempt superbly kept out by Jonas Lössl.

Although the afternoon had gone relatively to plan in terms of keeping a structured organisation, Town had eventually succumbed to Red Devils’ pressure; but to a large extent, United hadn’t had proceedings all their own way, and were duly forced to creatively work openings.

The second seemed to spurn the Blue and Whites on in aid of mounting an unlikely comeback. Collin Quaner and Florent Hadergjonaj both had respective crosses turned away by recovering red shirts in conclusion to neat moves crafted from the defensive areas and into the midfield; a mentality that had been adopted throughout the encounter, but which hadn’t quite materialised as United had a lion share of good fortune in response to Town’s offensive ventures.

The effort and commitment to the cause in the remaining minutes was excellent, which certainly didn’t look out of place as the overall performance would have pleased the Head Coach to great proportions regardless of the result.

Aaron Mooy flighted the ball towards the tireless Laurent Depoitre as injury time beckoned, with the number 20 unable to force De Gea into a save under the stewardship of Smalling and Rojo.

Town will look to get back to winning ways in the FA Cup fourth round replay at Birmingham City on Tuesday (February 6, 7.45pm), before hosting AFC Bournemouth in-front of the BT Sport cameras next Sunday (February 11, noon). 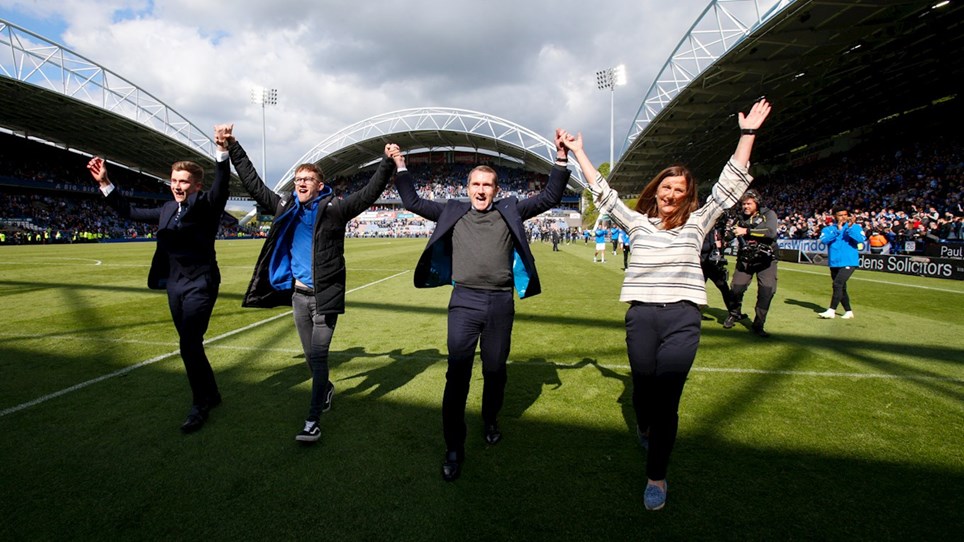 
A performance that suited the occasion perfectly in HD1, as Town held Manchester United to a valiant 1-1 stalemate in the last home fixture of the season and ultimately the last of under the tenure of... 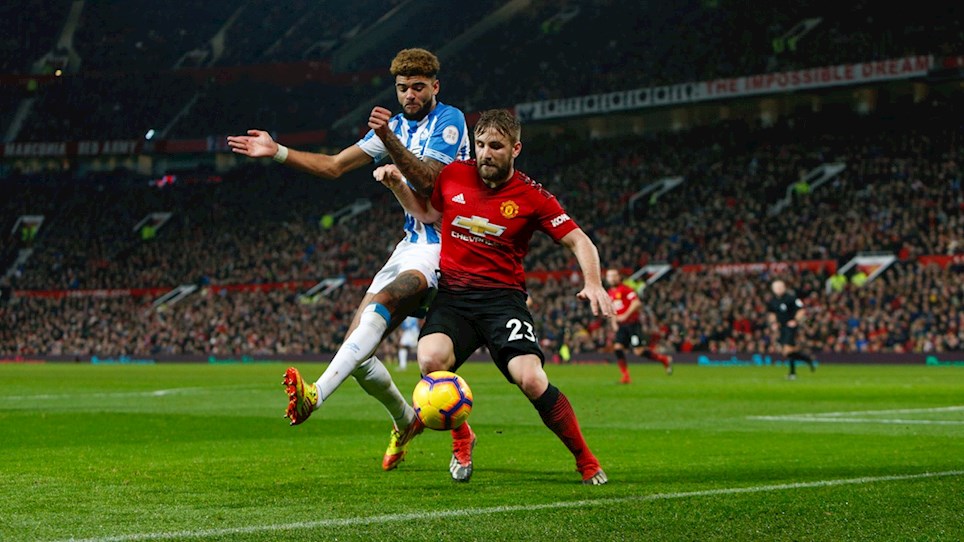 
A performance that certainly didn't lack energy, spirit and character at Old Trafford, but goals from Nemanja Matić and Paul Pogba (2) ensured it was Manchester United who secured the points on Boxing... 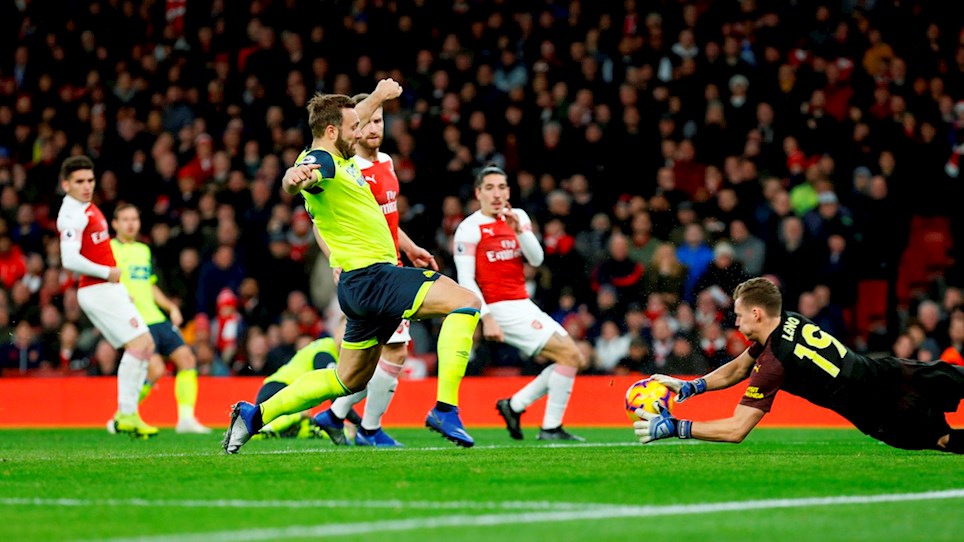 
It took 83 minutes for the 20-unbeaten Arsenal to find a way past a superbly resilient Huddersfield Town door on an afternoon where David Wagner would be thoroughly proud of his players' efforts once... 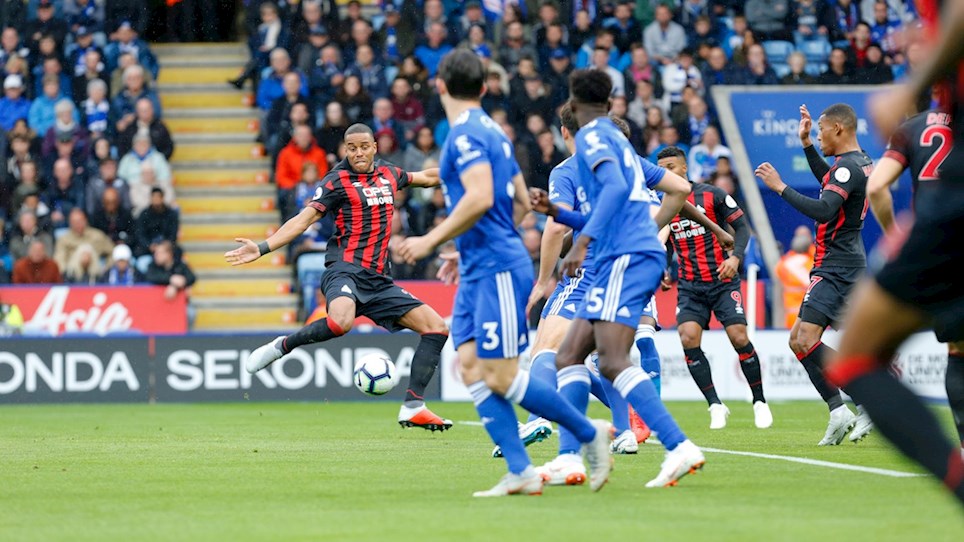 YOUNG TERRIERS ROUND OFF CLARETS CUP WITH SPECTACULAR DRAW