How far would you travel to watch your favourite team? One supporter travelled all the way from Germany to watch the Terriers.

One supporter, Alex Theile, travelled from Hannover, Germany to watch his beloved Huddersfield Town kick off the 2018/19 Premier League season against Chelsea at the John Smith’s Stadium.

Alex, who sat in the Revell Ward Stand Lower Tier, attended the game with his friend Jonathan Bray – the second match he has travelled to see over the last two seasons.

On his second trip to the John Smith's Stadium, Alex commented:

"I thought the support and the atmosphere at the John Smith's Stadium was absolutely amazing.

"I really loved the friendliness of the Huddersfield Town supporters and really enjoyed my second game watching the Terriers live."

This is just one example of how Huddersfield Town’s global support is growing as the Club’s incredible underdog story travels around the world.

Over 70 Terrier Memberships are held by supporters outside the UK; ranging from Europe, America, Asia and Africa.

One of the benefits of becoming a Terrier Member is that you receive priority when purchasing home tickets as well as getting a discounted price.

If you’re an overseas supporter and would like to know how to become a Terrier Member please CLICK HERE. 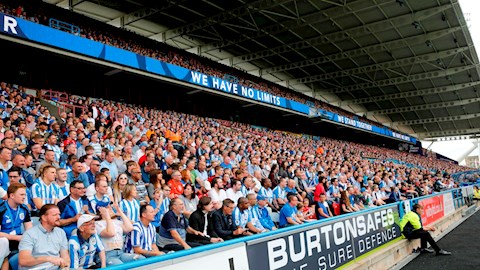