Away-day blues were swept aside as goals from Elias Kachunga, Aaron Mooy (2) and Laurent Depoitre sealed a magnificent 4-1 victory over Watford.

Kachunga and the first of Mooy's strikes sent Town in at the break with a two-goal cushion, with Laurent Depoitre and Mooy's second via a penalty confirming all three points either side of Abdoulaye Doucoure's consolation.

The first match of successive away games ahead of Christmas, the Head Coach made four changes in response to the mid-week defeat against Chelsea. Florent Hadergjonaj, Rajiv van La Parra and Laurent Depoitre took the places of Tommy Smith (illness), Tom Ince and Steve Mounié respectively. The final change saw Jonathan Hogg skipper the side whilst anchoring the midfield ahead of Danny Williams; 'Hoggy' would receive a welcome reception at Vicarage Road in light of making 78 appearances for the Club between 2011 and 2013. Scott Malone was re-called to the bench after previous absences from the last two fixtures on home soil.

The re-instated Rajiv van La Parra did his best to make Town hearts skip a beat early on, as the Dutchman showed composure to bring down a lofted high ball with a soft touch between on-rushing yellow shirts.

The Blue and Whites shirts however began in a positive fashion, and indeed broke the goal-scoring hoodoo to net a first on their travels since the opening day win at Crystal Palace.

As the vocal travelling support lit up one corner of a renovated Vicarage Road, Elias Kachunga used great strength to hold off Kabasele before drawing out opposite 'keeper Heurelho Gomes. The winger held the ball up superbly to draw a challenge and vitally win a corner, which Town would take full advantage of.

The Hornets failed to clear their lines effectively, culminating in a scramble which resulted in Collin Quaner picking up the ricocheted clearance at the far post. Quaner swiftly fired across the face of goal to find an un-marked Kachunga tapped home his first Premier League goal- an undoubtedly huge boost to the morale as proceedings began to settle down.

As expected, Watford hit back, and it took the figure of Laurent Depoitre within the penalty area to crucially divert Daryl Janmaat's deep cross away from the visiting cavalry of home players congregated dangerously at the far post.

Despite the temperature dropping bitterly cold north of the Capital, the linesman's flag would come to the Hornets' rescue as the 15 minute mark approached. Once more an Aaron Mooy corner delivery caused defensive hesitancy amongst the Watford ranks.

Chris Löwe returned a headed clearance by volleying straight into the path of Mathias Zanka, but the flag halted that move prematurely before the Dane could square to the unlikely source of Christopher Schindler.

Richarlison blazed over in the host's first real chance of the game. The Brazilian received possession on the left, and a neat touch set him through to goal with no end result. That chance arriving after Aaron Mooy positioned himself expertly on the line to deny Jose Holebas' corner from creeping in. A sign that the Town players had kept focussed despite the departure of goal-scorer Kachunga through injury a brief break in play.

After superb defensive work, the Aussie would pop up at the other end with a crucial Huddersfield Town second of the afternoon.

Collin Quaner had another pivotal role in the lead being extended. The big man surged down the right un-challenged and played a troubling low, drilled cross at the by-line to cause headaches at the back for Marco Silva's men.

Collin's persistence and eventual cross wasn't dealt with which allowed Mooy to ghost in round the back to bundle home and double the Terriers' deserved advantage; memories of a torrid away form left in a distant past in the first half-hour of the contest.

Not only had Town been clinical on the offensive front, the work-rate in keeping the tactical shape was also of the highest order, summed up by the unit of Quaner, who was consistently providing able support to Hadergjonaj in the right full-back role to keep tabs on lively playmaker Richarlison.

Watford's task of overhauling a buoyant Town side was already a tough assignment after the concession of Kache and Mooy's efforts, and that task was ramped up a notch following a straight red card to Captain Troy Deeney. Referee Michael Oliver gave the striker his marching orders after an attempted recovery challenge on Collin Quaner just inside the home side's half.

That man Quaner was proving to be a tremendous thorn in Watford's side, and the hosts just couldn't get to grips with the German's pace and power down the right. Doucoure earned himself a yellow card for a foul on the energetic wide-man; a free-kick which Tom Ince agonisingly curled over the bar from the edge of the area.

Town's lead could well have been three heading into the interval, but despite magnificently dogged tenacity to win the ball back in the centre of the park from Jonathan Hogg and Aaron Mooy, Rajiv van La Parra couldn't make the most of a useful touch and struck tamely into the palms of Gomes between the sticks.

A superb half with a duo of away goals for the Terriers nonetheless; something that has been in short supply for the initial part of the Premier League campaign.

Town didn't take it's foot off the gas after the break, and would eventually make it 3-0 within the blink of an eye after three successive chances.

Firstly Quaner skinned marker Kabasele but saw an attempted cut-back land at the feet of Prodl, before Tom Ince rounded Gomes but the 'keeper showed agility to palm the ball away, but Tom continued to display supreme ingenuity by dinking to the far post which was put wide of the upright by a matter of inches from the heavily-involved Quaner once again.

However, the just rewards for unrelenting pressure were achieved as Belgian International Laurent Depoitre fiercely drove home from a narrow angle bang in-front of the sensational Terriers' support; cue scenes of unrivalled jubilation, and David Wagner's men were putting in a shift of real heart and passion to earn that elusive second away victory of the season.

Andre Carrillo mustered a curling effort in a bid to reduce the arrears for the home side, but Florent Hadergjonaj was intent on keeping the sheet clean by heroically throwing himself in front of the effort to divert away for a corner.

Jonathan Hogg had really been a dynamo in the centre for the Terriers in his old home of Hertfordshire, but the midfielder's afternoon was cut short as a result of a second yellow card shown by Michael Oliver for a late tackle on Richarlison.

Marco Silva threw on Andre Gray in order to disrupt the solid blue and white back-line, but the closest Watford had come in the latter period came and went in the form of Sebastian Prodl. The Czech defender rose highest, but headed over from an out-swinging corner.

However, after Jonas Lössl had strongly punched away Pereyra's dipping curler, Abdoulaye Doucoure squeezed a thunderbolt through a crowd of Town defenders which nestled into the bottom corner, giving the home side a partial rejuvenation for the last 20 minutes of the encounter.
Town needed to rally and stand firm, even at 3-1, as the tide had turned since Hoggy's dismissal to level up the numbers on the field.

Watford pressed, and following a period of turning and twisting on the edge of the area, the ball fell kindly on the right to Andre Gray. The former Burnley marksman drove across the face of goal, but watched the ball sail wide of the far upright; a major let-off for the now man-light Terriers.

The storm had well and truly been weathered through a combination of excellent positioning and fight for the cause, with Christopher Schindler providing substantial evidence to that notion by being too strong for Okaka and Richarlison on multiple occasions.

Danny Williams tried an inventive lob over the top to breach a static Hornets defence, but the pass was eventually too long and bounced out of reach of the chasing Depoitre.

Aaron Mooy followed up by aiming to sneak a cheeky effort in at Gomes' near post, but the shot took a wicked deflection and rolled out for a corner in which Town could this time not take advantage.

Tom Ince was desperate to get in on the act. Crucial hold-up play opened up a chance which Gomes would tip over, extending Tom's Premier League goal drought that little bit further.

But a drought that certainly came to an end was that of the Club's own goal-drought away from the John Smith's Stadium. Doucoure had an impact at the wrong end by bringing Laurent Depoitre to the ground in the area and most importantly in the view of Michael Oliver, who duly pointed to the spot.

Aaron Mooy stepped up to convert the penalty for his second of the afternoon and Town's fourth.

Gloss may well have been added to the score-line as the time reached it's duration. Collin Quaner, a man who if anyone more than deserved a goal with his terrific display, saw his side-footed attempt cleared off the line by a recovering yellow shirt.

Laurent Depoitre chipped over the bar deep in injury time, but the damage had already been done. Three, vital Premier League points, which, as Town supporters filtered out of the ground with a specially modified rendition of 'Last Christmas', would have done wonders to lift the spirits on the road as the busy festive schedule begins to take shape. 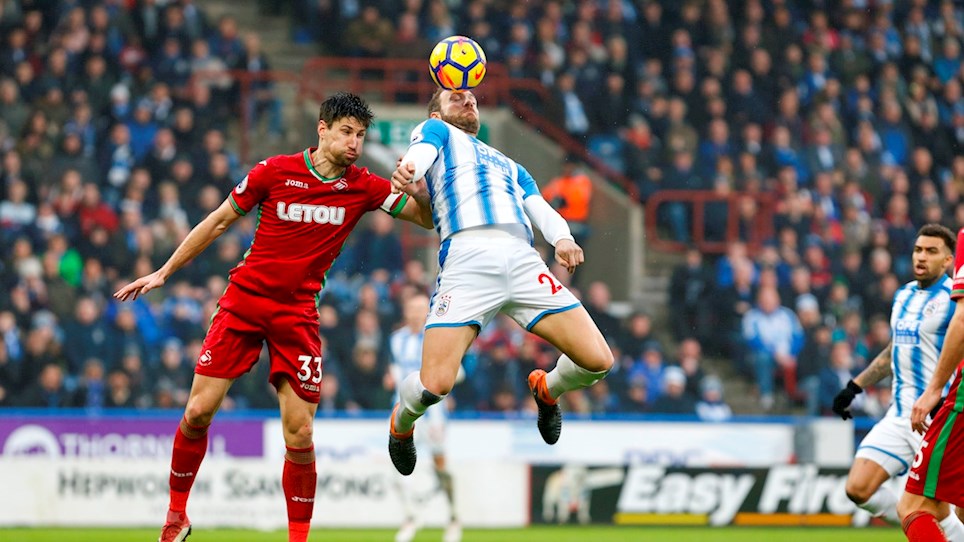 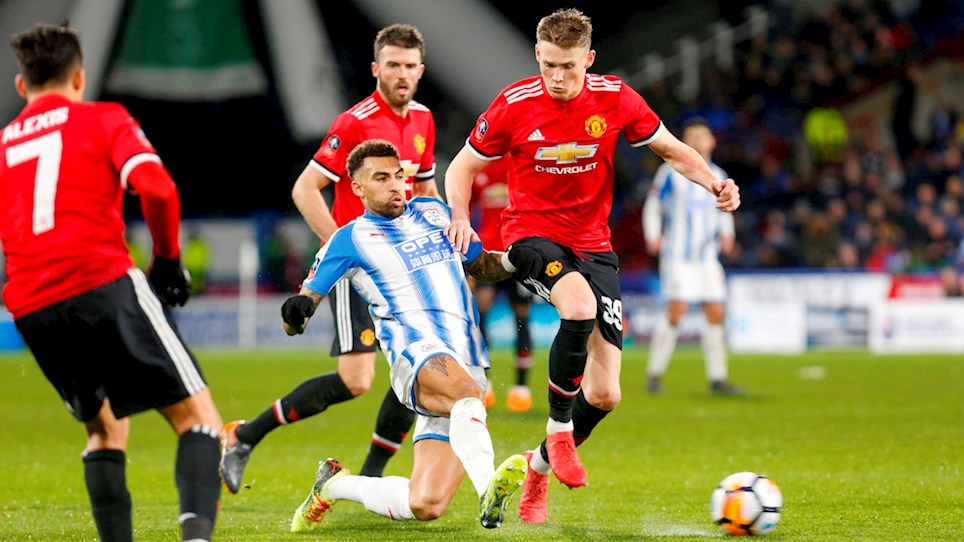 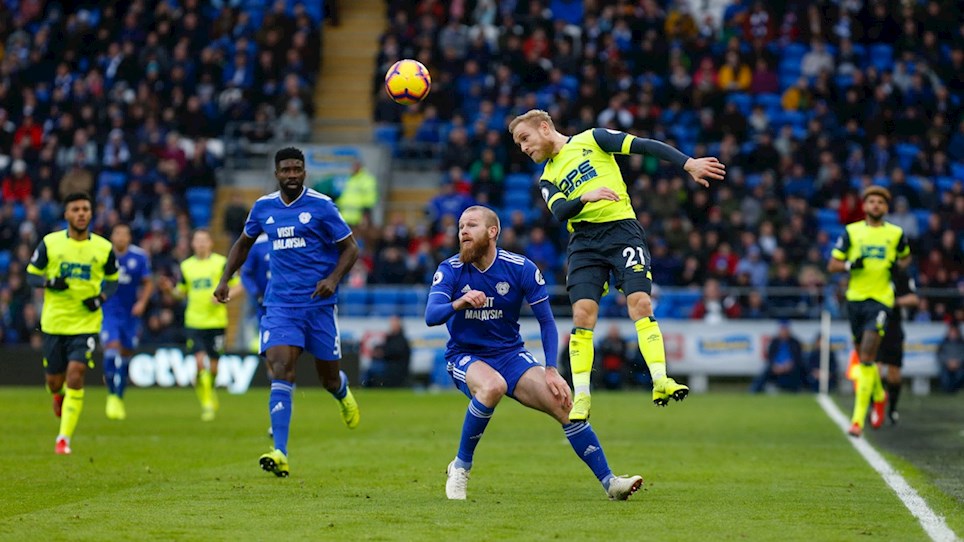 
A second goalless draw of the season between Town and Cardiff, this time, in the Welsh Capital where chances were few and far between. 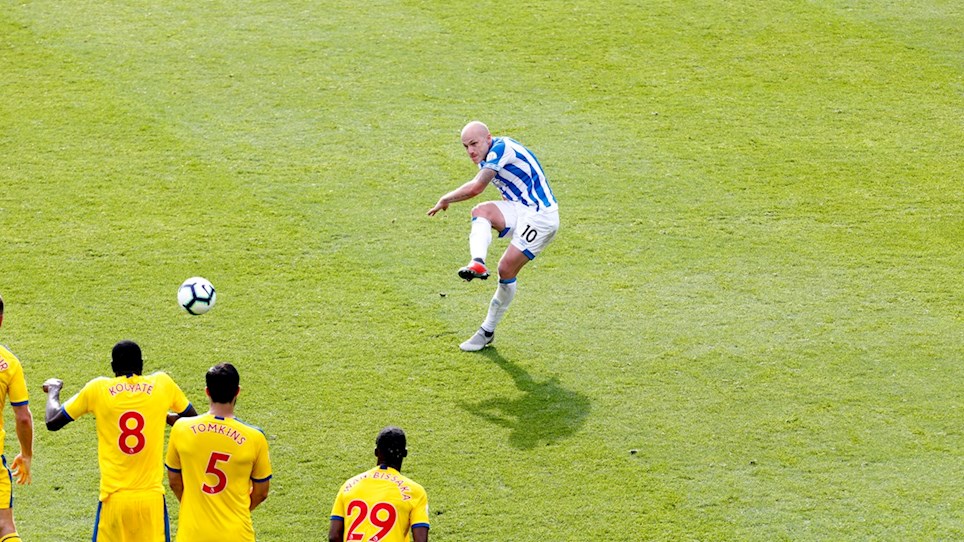 
Wilfried Zaha's sole first-half strike sent Crystal Palace back to London with all three points despite it being Town the side who dominated the majority of the proceedings.

YOUNG TERRIERS CAN LEARN A LOT FROM DONCASTER GAME