Huddersfield Town will look to take the positives out of the “best performances of the season” against Crystal Palace into the Premier League game against Leicester City on Saturday 22 September 2018; 3pm kick-off.

Town will travel to Leicester to battle the Foxes at the King Power Stadium looking for a first win at the ground since January 2012.

Leicester City currently sits 11th position in the Premier League table, seven spots higher than Town, and has won two matches this season over the Wolves and Southampton.

The Foxes come into this game off the back of a 4-2 defeat away at AFC Bournemouth that saw Captain Wes Morgan sent off.

French Manager Claude Puel currently holds the reigns at Leicester City. In his 41 games the Club has won 16, drawn 10 and lost 15.

The last time Town played Leicester City at the John Smith’s Stadium, the teams came out with one point each (1-1), however, lost 3-0 when the sides last met.

Maddison joined Leicester City in June 2018 for an undisclosed fee. The 21-year-old has since started every game for the Foxes and scored two goals. The attacking midfielder looks to unlock defences and has one assist to his name. He’s Leicester City’s top scorer in FPL. 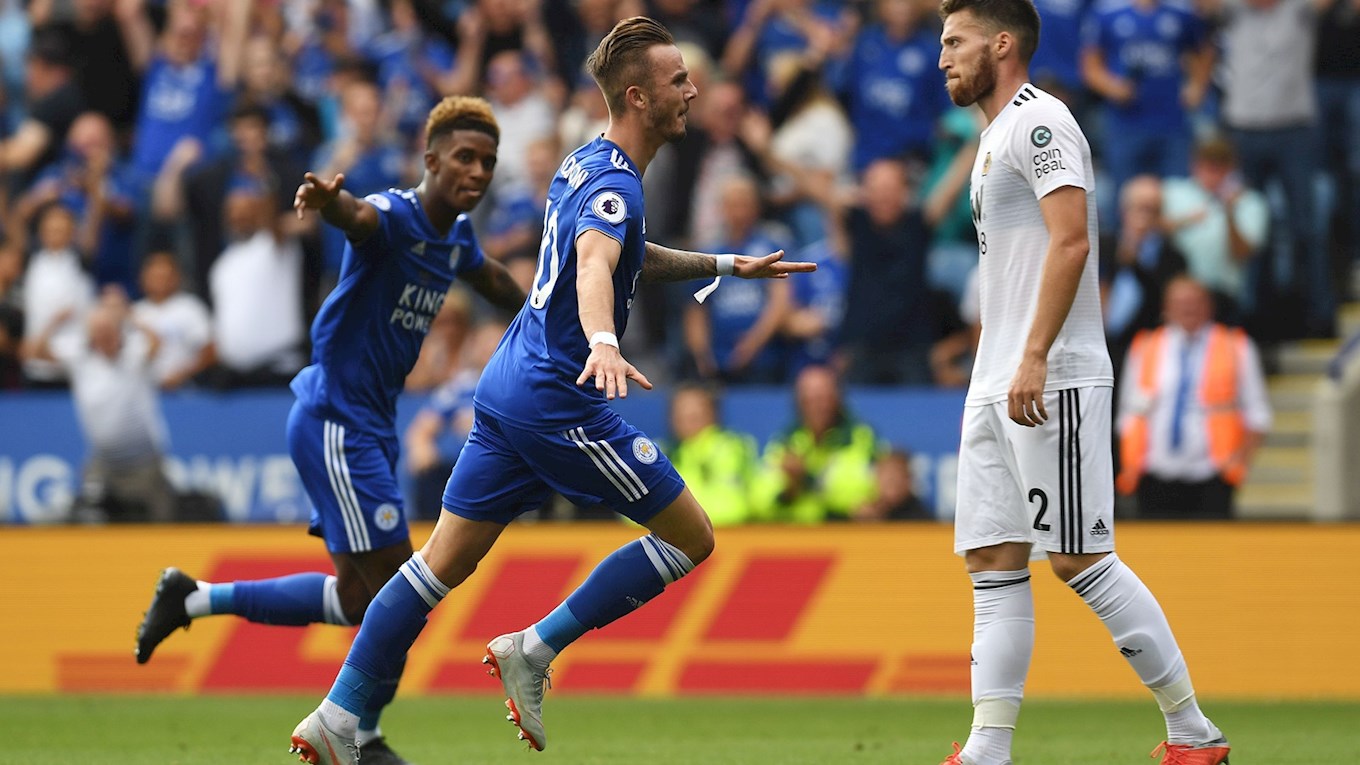 The 22-year-old winger has had made multiple international youth caps for England and Manager Claude Puel sees a future for the young star in his side. The left-winger, who has also played upfront this season, has scored one goal this season and had a stand out performance of nine FPL point in the Foxes’ win over Southampton. 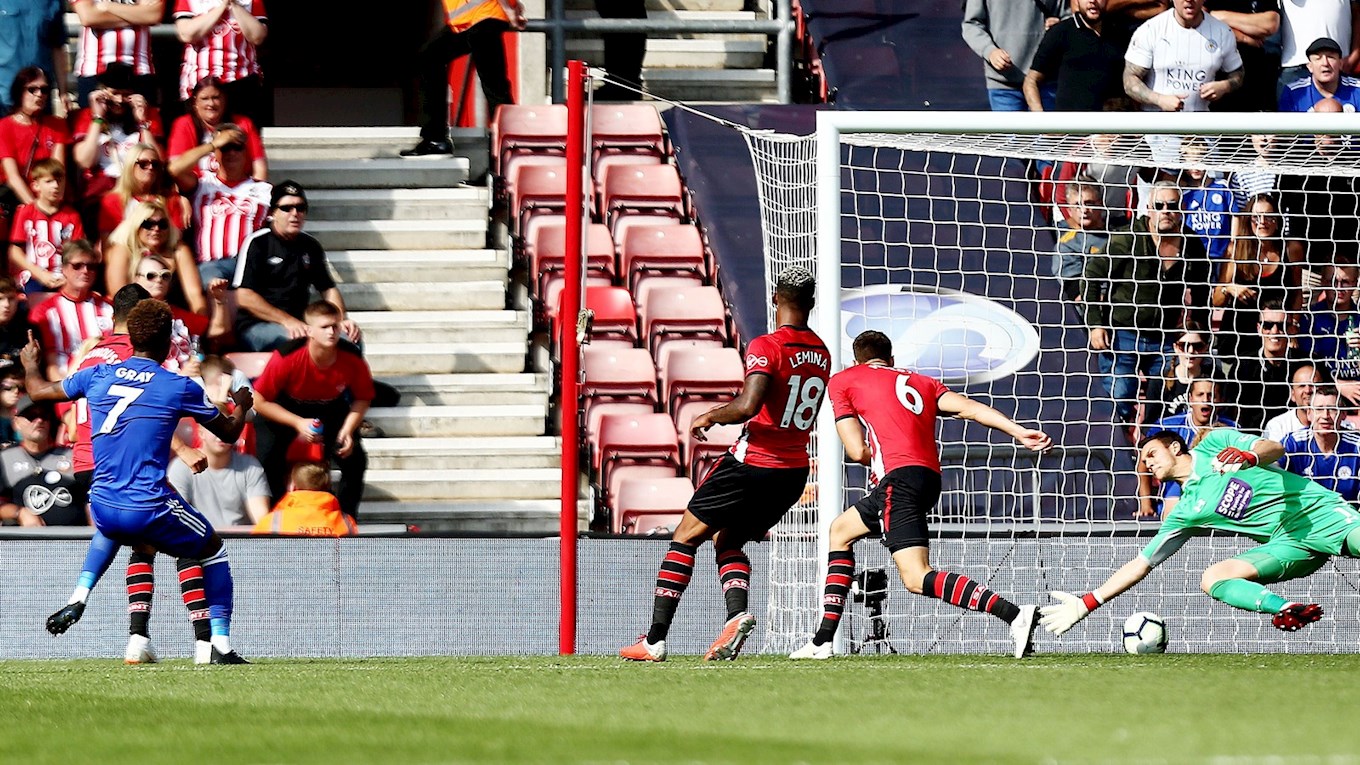 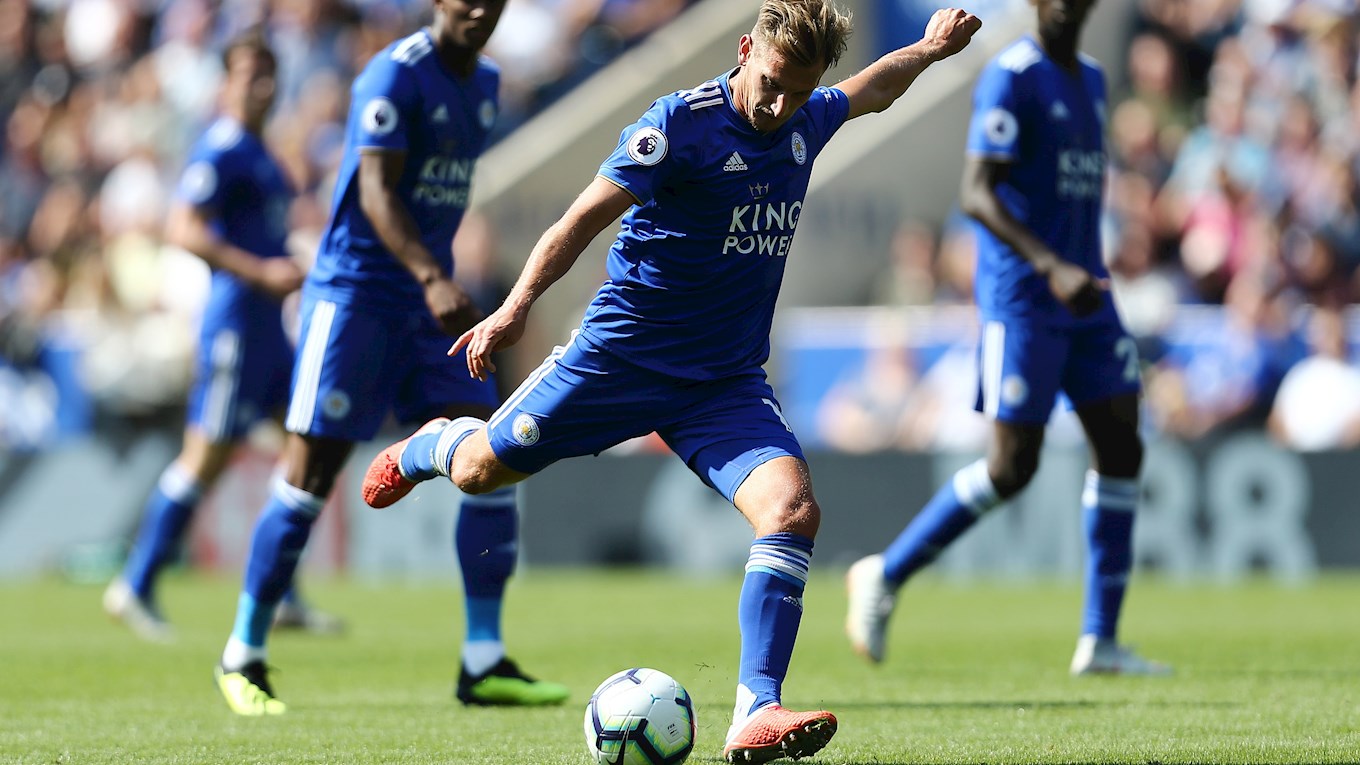 Leicester City will be without the suspended Wes Morgan who received to yellow cards against AFC Bournemouth.

Tickets are still available for the match at the King Power Stadium; CLICK HERE for full information.

Town will be wearing their red and black away striped shirts for Saturday’s Premier League clash against Leicester City at the King Power Stadium.

Town took an early lead at the King Power Stadium but fell to an eventual 3-1 defeat courtesy of Kelechi Iheanacho, James Maddison and Jamie Vardy.

Zanka's first Huddersfield Town goal was cancelled out by Iheanacho's leveller on the counter, as Maddison's free-kick and Vardy's third after the interval kept the points in the Midlands.

Erik Durm started his first Premier League encounter of the season in one of two changes to a Town squad on the hunt to swiftly bounce back from an unlucky defeat to Crystal Palace last Saturday. Florent Hadergjonaj was the man to drop out to accommodate the German's opening league appearance, with the second change arriving in the form of Laurent Depoitre leading the line in the place of Steve Mounié who was named amongst the substitutes. Ramadan Sobhi (knee) remained on the sidelines, as previous absentee Jonathan Hogg joined Mounié on the bench having completed his three-match suspension.

An early succession of Philip Billing long throws resulted in the first attempt of the match falling to the unlikely source of Durm, who's driven effort flashed wide via a wicked deflection off Christopher Schindler.

Durm's chance may have missed the target; but the next most certainly did not. Zanka bundled home Laurent Depoitre's flick instigating from yet another Philip Billing throw to net for the first time since joining from FC Copenhagen in the summer of 2017.

The start of all starts; David Wagner would have been delighted with the way his men had imposed themselves on a Leicester side. Breaking with pace and purpose, the red and black clad Terriers seemed to have began with the same energetic confidence which has just lacked that end reward in the recent outings.

As Town probed for a second with Chris Löwe's free-kick causing havoc which had the Foxes backline retreating, Claude Puel's hosts displayed lightning attributes on the break to level the scores.

Erik Durm lost possession just inside the Leicester half, and as Town had numbers forward in order to attack the second phase of another Löwe set-piece, the Blue shirts poured forward and it was Nigerian International Kelechi Iheanacho who calmly stroked home the equaliser past Jonas Lössl.

In terms of play, it was harsh; but City's predatory instincts served them well granting them a morale-boosting lift. Jamie Vardy somehow volleyed wide James Maddison's inventive free-kick to majorly let Town off the hook.

A very entertaining opening 25 minutes at a ground which has seen more than it's fair share of entertainment through the past ventures at both domestic and continental level.

Despite conceding that deflating leveller, the Terriers continued to attack. Depoitre nodded narrowly wide having got the better of his marker, all before Vardy stung the palms of Lössl at the other end from range.

Aerial balls consistently forced headaches in that City rearguard. Elias Kachunga controlled in acres of space at the far post from Billing's deep cross but found a resulting effort blocked with Depoitre unable to tuck home the rebound in what would turn out to be the last real chance before the break.

The intensity didn't let up after that interval. Maddison rolled a free-kick inches wide of the post, ahead of Laurent Depoitre barnstorming his way up the field beyond two City challenges but just couldn't direct a cross into the path of the waiting Elias Kachunga.

Puel had introduced Demarai Gray, and the England Under 21 winger instantly showed great work ethic to track down Rajiv van La Parra, who thought he was in the clear with a path open as a result of a kind deflection. David Wagner responded with his own throw of the dice, unleashing Adama Diakhaby.

Both sides were open to a threat on the break in-behind, and Leicester possessed a striker who knows nothing better than to exploit those areas. Jamie Vardy sprung the offside trap but could only tamely shoot straight at Lössl who's strong wrists allowed his side to clear.

The Foxes carved out another decent opportunity which went to waste. Goal-scorer Iheanacho placed wide Chilwell's low cross, as Leicester gradually began to up the ante similar to the pattern that occurred in this fixture back on New Year's Day.

But as Leicester thought they were beginning to knock hard on a firm Town door, it may well have been the visitors from HD1 who regained the advantage.

Rajiv van La Parra's excellent pass through the heart of the Foxes found Laurent Depoitre's surge from deep, and as the physical striker bore down on goal one-on-one with Kasper Schmeichel, Harry Maguire seemed to have done enough to divert away from danger at the pivotal moment.

And as one chance went begging, a moment of magic from James Maddison sent the home side into the lead.

Diakhaby's foul on Nampalys Mendy in a dangerous position gifted the chance for Maddison to produce a set-piece which caught the eye of many whilst representing both Norwich City and of course, Leicester City.

The attacking midfielder curled a peach which Jonas Lössl did his best to scramble away but the attempt just had too much for the Danish custodian and settled in the roof of the net.

Leicester were hungry for more. As Town switched to a back-four after the introduction of Alex Pritchard, the impressive Gray curled for the far corner to which Jonas Lössl this time clouted away. Gray saw his shot saved. Vardy showed him how was it done just moments later.

Another Leicester break, this time down the right. The talisman raced away from Zanka and delicately chipped over the advancing Lössl to all but wrap up all three points.

Depoitre had another guilt-edged chance to reduce the arrears heading into the final five minutes. Kasper Schmeichel was more than equal to a weak header originating from a Christopher Schindler flick-on. 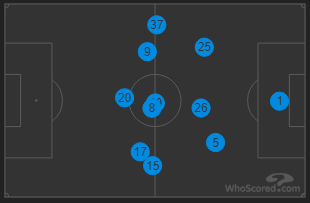 *Image shows the average position of Town's players during the game