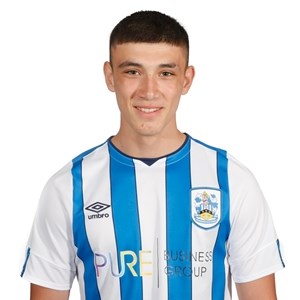 Yorkshire born Kian Harratt joined Town’s Academy at Under-17 level ahead of the 2018/19 campaign.

The striker has been part of the Academy set-ups at both Barnsley and Leeds United, joining those after performing for his junior club Upton United.

Whilst on trial with Town, Kian made four appearances for the Under-18s during the 2017/18 season.

His first full season as a Terrier was a revelation. He immediately established himself in the new-look Under-17 side and progressed to the Under-19s, finishing the season with an incredible 32 goals in just 47 appearances.

An injury in the 2019/20 pre-season period barely knocked him back, and he was right back on the goal trail upon his return.

That form alerted new First Team Manager Danny Cowley to Kian, and the proud Yorkshireman made his senior Town debut as a substitute during the big derby game against Leeds United at the John Smith's Stadium in December 2019.

He trained extensively with the First Team after his bow before joining Vanarama National League side Harrogate Town on loan, initially for one month. Four appearances was all it took for Harrogate to ask to extend his loan for the rest of the campaign!


Young striker returns on loan to Vanarama National League side