Today saw the inaugural Female Inclusion and Empowerment Conference hosted by Huddersfield Town at the John Smith’s Stadium, with around 150 attendees taking in what the range of speakers had to share.

The event was hosted by Deborah Ogden who opened the event with a summary of the work that Huddersfield Town were doing in the EDI sphere, and how sport has been a huge part of Deborah’s life from her time working in the sector.

Founder of iTrain Legal, Dorigen Sykes spoke of her history, from being the first female mascot of Huddersfield Town, through to working in the Ticket Office at the Club, to setting up her own business and offering training services to some of the largest law firms in the world. Dorigen asked the room to challenge the norms, make your own luck, take chances when they come, and enjoy the journey.

MP for Batley and Spen, Kim Leadbeater spoke of the importance of sport for women’s empowerment. Kim discussed the crucial role that women play in communities and families, and how women’s inclusion in sport and in politics led to multi-dimensional benefits for everyone. Kim spoke of her work with the Afghan Women’s football team and how sport can give something in some way to everyone, with benefits around human connections, laughter, friendship, mental health and wellbeing.

Solat Chaudhry also joined us from the National Centre for Diversity. Solat spoke of gender equality as well as the importance of empowerment for everybody. He gave some stats into the levels of diversity in the country and emphasised that there is still much work to do. He finished his presentation considering systemic inequality. 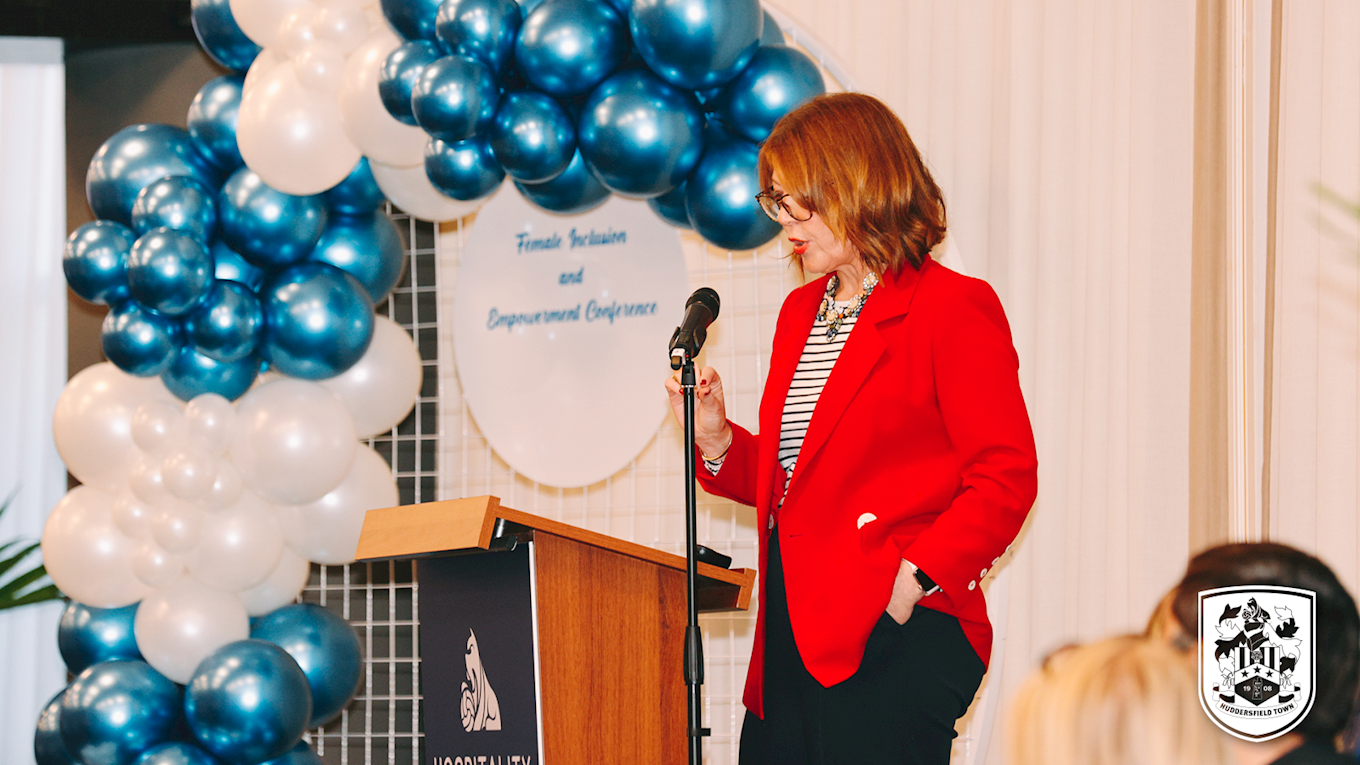 Jacqui Gedman, CEO of Kirklees Council, spoke of why female inclusion is so important to her. Jacqui believes that football brings everyone together and the importance of sport in the community. Jacqui spoke of her development from working in civil engineering and how she combatted the subtle discrimination, sexism and misogyny which was often found in the industry. Jacqui discussed how true leaders need to learn and practice their skills, and be that leader that you want to be and live out those values, whilst creating conditions for people to excel and show their uniqueness. Jacqui ended her presentation with the advice to be kind, value differences and learn from it, as well as encourage, empower, be patient and have fun!

Huddersfield Town HR Manager Zoe Shackleton and Operations Director Ann Hough then took to the stage to discuss the various initiatives that the Club were working on to improve inclusion within the ethos of the Club, touching on our status as a Menopause Friendly Employer.

Anne Bell and her son Joseph then spoke of their work at HSBC and with Orthodontics respectively. They looked at how menopause was considered a taboo subject and looked at how their experiences worked this generation not discussing it.

Steph Bartle ended the morning discussing apprenticeships. Steph is the Delivery Lead for Apprenticeships Kirklees Council Employment and Skills Team and discussed how Apprenticeships can upskill or give the chance to get better jobs and impact on a better quality life.

“Our first Female Inclusion and Empowerment conference has been an incredible success and I’d like to thank all of those who came to the event. I’d also like to thank all of our speakers for giving up their time and telling their stories. There are a lot of taboos around items such as menopause and gender equality and I was delighted that this was an event that looked at, discussed and tackled those issues head on.”

“I’d like to thank Dorigen and everyone at iTrain Legal for their help and support. The range of topics around empowering women and increasing awareness of the challenges that women face in the workplace and in life was both inspiring and insightful.”


Last chance to register for the Female Inclusion and Empowerment Conference

WILL BOYLE BECOMES TERRIERS TOGETHER AMBASSADOR!