Town win on the road

Huddersfield Town secured their first EVER win at Riverside on Monday afternoon, running out 0-2 winners over Middlesbrough.

An important win for the Terriers in their push for promotion, second half goals from Naby Sarr and Jordan Rhodes proved enough at the end of a thrilling 94 minutes.

Town came out the of the blocks fastest, with Rhodes pressing high to win a corner within the opening minute. Unfortunately, it came to nothing.

Lee Nicholls was called into action for the first time in the tenth minute, as Duncan Watmore bobbled one towards him on the volley.

Seconds later, Sorba Thomas tried his luck with a very ambitious effort! Lewis O’Brien won the ball and let Rhodes carry it, who then played it neatly inside to Thomas. The latter lined it up from distance, and his strike wasn’t far over!

The game struggled to settle, instead being a fairly scrappy affair, with neither side taking initiative.

The 26th minute saw Rhodes claim, accurately, for a back-pass, as Sol Bamba almost lobs Luke Daniels, who has to catch it to stop the own goal. An indirect freekick to Town in the Boro box – Jonathan Hogg lay it off to Rhodes, who’s effort is blocked by a number of Boro bodies rushing off the goal line.

Moments later, a nicely worked corner routine from Thomas to find Rhodes along the ground, but his strike was blocked back into his own leg, going out for a goal-kick.

Harry Toffolo was shown a yellow card in the 36th minute for a challenge on Isaiah Jones out wide.

The deadlock was broken in the 41st minute, thanks to Sarr! Thomas whipped in a dangerous freekick to the far stick, where Rhodes rose excellently back across the goal. Sarr was waiting in the middle to nod it home and put Town ahead!

The Terriers built on their momentum in the final moments of the half, earning themselves two freekicks. Unfortunately, neither came to anything.

The Terriers started the second half as the first had finished, with half-time substitute Josh Koroma forcing Daniels into an excellent save.

As the clock showed an hour played, Rhodes bagged Town’s second of the afternoon! Some fantastic work from O’Brien found Rhodes in acres of space, allowing him to power a shot into the back of the net for his 89th Town goal!

Five minutes later, Nicholls was called into action as Folarin Balogun hit one first time from the edge of the box. Thankfully, it was straight at our no.21.

The 71st minute saw the Terriers come INCREDIBLY close to a third! Koroma turned his man and had an effort blocked off the line. Unfortunately, the rebound fell too quickly for Rhodes to direct his shot, seeing it go wide.

Town’s second yellow card of the game was shown to O’Brien five minutes later, who was a touch late making a challenge on the halfway line.

The third booking followed in the 80th minute, as Jon Russell was found guilty of wrestling a Boro player for the ball.

The final minutes of the game saw Pipa unleash a PHENOMENAL block. Riley McGree curled an effort onto the bar, before Marcus Tavernier met the loose ball with a fierce block. Thankfully, Pipa was on hand to deny him magnificently, which saw him congratulated by Nicholls!

The Terriers saw out four minutes of added time to run out with all three Sky Bet Championship points.

Town are back in action on Friday 22 April 2022 when they welcome Barnsley to the John Smith’s Stadium. CLICK HERE to buy your tickets! 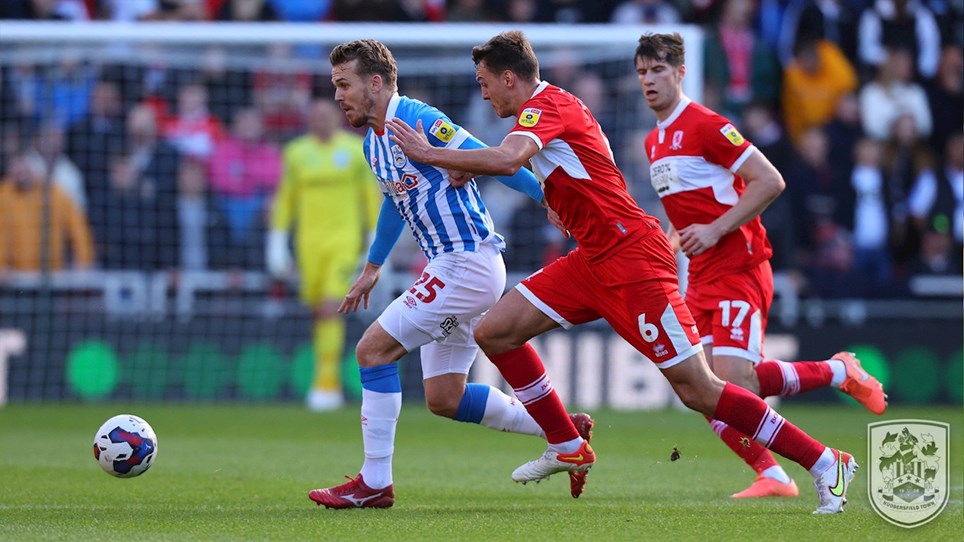 
A well organised performance earns Town a point on the road