Friday 29 April 2022 marks 100 years since one of the biggest achievements in the Club’s storied and proud history - Huddersfield Town’s sole FA Cup triumph!

It was the third time in just four seasons that we’d reached the final of the competition and although the ultimate prize had evaded us in our first two attempts, optimism abounded among Town fans.

It was at Chelsea’s Stamford Bridge that the final between Town and Preston North End took place. Amazingly, the two finalists met just days earlier in league action and the omens were good, thanks to a thumping 6-0 victory!

It was an expensive and long trip to the capital for the Town faithful, with return rail fares set at £1 6s 6d (around £1.32), arrival at 5am and a midnight return to West Yorkshire. Those high prices for the day were attributed to the crowd being 53,710 – well below that of the 1921 final.

The team, meanwhile, had set up a training base in Blackpool to prepare for the big day. Making their way to London the day before the game, they were met with surprise when the opposing team was in the adjoining train carriage!

As is so often the case in big finals, the game itself wasn’t one that is remembered for fluid attacking play. Instead, the major comment was on the high number of fouls committed by both teams. It was fitting, therefore, that the tie was settled by one major incident – a foul by Preston’s right back Hamilton on the legendary Billy Smith. Although some observers commented it occurred on the edge of the area, referee JWD Fowler pointed to the penalty spot!

Smith made no mistake, sending the ball arrowing into the bottom corner past goalkeeper Mitchell, who had done his level best to distract the Town man with some notable antics on the line.

Town’s players were presented with their medals by the Duke of York, later King George VI, and afterwards a celebration dinner was held at the Great Central Hotel in Marylebone.

Back in Huddersfield there were wild celebrations. Town’s reserves played at Leeds Road at the same time and when news of the result came through, hats, caps and sticks were hurled into the air! A crowd of 1,500 gathered outside the Huddersfield Examiner offices, whilst a blue and white star shell was fired from the Palace Theatre.

When the Town squad returned on the Monday, a crowd estimated at 30,000 packed St. George’s Square to greet the train. The players took to two open-top buses, one bearing the legend ‘Smile Awhile: 1922: Still Smiling’. Tommy Wilson held the cup aloft as the procession made their way to the town hall through the predictable rain.

The 1922 Cup Final shirts featured the Huddersfield Coat of Arms in blue, black and yellow silk on the left breast and a white rose badge on the right breast. We are thought to be the first Yorkshire club to wear the rose in this manner.

In honour of that kit, the current Town shirts have the white rose in the centre of the chest.

This being a ‘Battle of the Roses’ final, Preston North End wore the red rose to represent Lancashire. 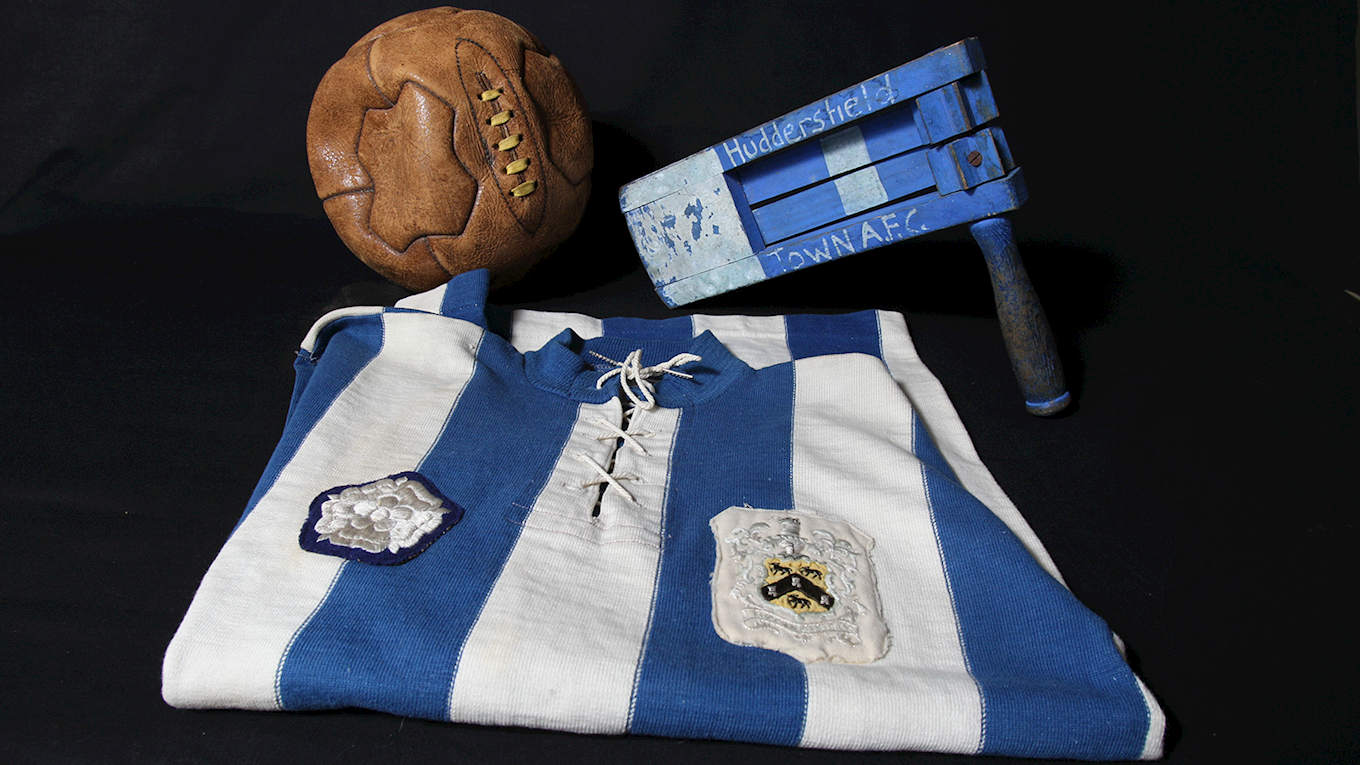 
It is 100 years since Huddersfield Town won the English Cup; let the celebrations begin!


Town paid tribute to the 1922 FA Cup winning side