Fraizer Campbell’s second-half strike had given Huddersfield Town the lead but was cancelled out soon after as the Terriers drew 1-1 with Birmingham City in the Sky Bet Championship.

Campbell’s seventh goal of the season put Town ahead just after the hour before Marc Roberts’ leveller less than four minutes got the visitors back on terms.

The Blues went closest to a winner late on but couldn’t find a way through as the game finished all-square at the John Smith’s Stadium.

There was one change to the Town XI from the weekend’s trip to Preston with Richard Stearman coming in for his first start since November in place of Richard Keogh at the back.

With that being the only change, it meant that Fraizer Campbell made his 50th start for Huddersfield Town in all competitions from the start.

On a misty night at the John Smith’s Stadium, it was Town who registered the game’s first opportunity courtesy of Campbell.

The forward, who scored in Town’s 3-0 win against Birmingham at St Andrew’s in July 2019, saw the ball fall at his feet inside the penalty area and having dug the ball out, his shot was blocked by the crowd of visiting defenders that had assembled in front of him.

At the other end, the visitors’ first chance came by the way of Jérémie Bela. The City winger worked some space on the left side before dinking to the back post where the ball narrowly evaded the goal and drifted wide.

It was Stearman who then had to be alert just after the half-hour mark, getting his head to Iván Sánchez curling goalbound effort from just inside the box.

Sánchez was again at the heart of the action moments later, cutting in from the right flank. This time he drove into the box with his whipped strike falling just wide of Ryan Schofield’s far post.

After the break, Town had a lot of the ball to little reward before a moment of brilliance on 63 minutes from Campbell.

The ball dropped to Town’s no.22 on the edge of the box and he caught it sweetly, picking out the bottom corner with a ferocious strike on the half-volley to give the Terriers the lead.

Less than four minutes later however, the visitors drew level. A corner from the right fell to Marc Roberts inside the six-yard area and the Blues defender made no mistake in finding the net from close range to get the Blues back on par with Town.

Yaya Sanogo was among those introduced in the closing stages as the Terriers looked to find the all-important third goal.

It was the visitors who came closest though inside the three minutes of stoppage time. A long throw into the box from Roberts was flicked on and narrowly evaded the Town goal.

That turned out to be the final chance of the encounter as the sides shared the points at the John Smith’s Stadium.

Next up for Town is the visit of Cardiff City to the John Smith’s Stadium on Friday 5 March 2021; 7.45pm kick-off. 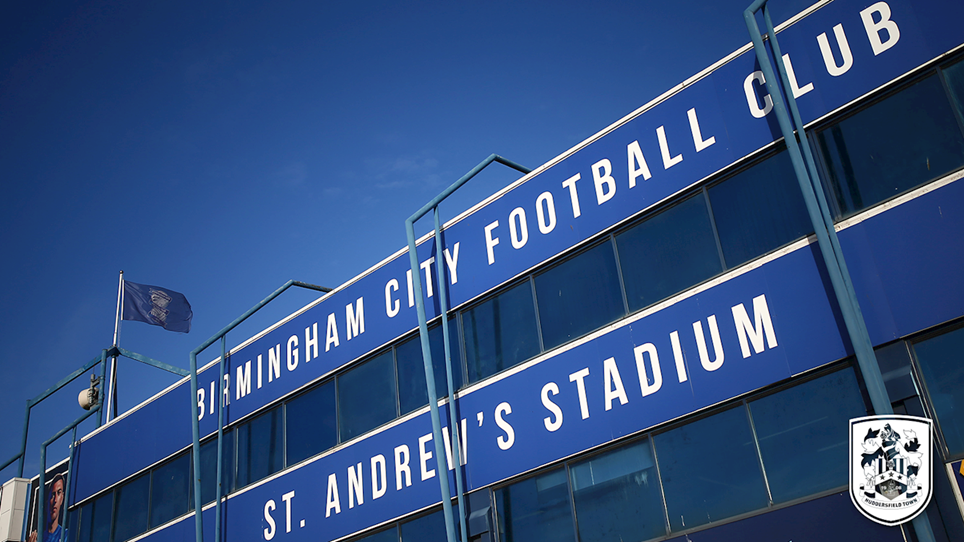