Young Terriers back in action on Saturday 3 July 2021

- Huddersfield Town B Team plays at Tadcaster Albion on Saturday
- Fans can attend the 1.30pm kick-off
- Midfielder Josh Austerfield can’t wait to get out there!

Midfielder Josh Austerfield can’t wait to play in front of fans when the B Team plays the first pre-season friendly at Tadcaster Albion on Saturday!

Jon Worthington’s Young Terriers are back on the pitch for the first pre-season friendly this weekend, playing the Northern Premier League side at the Global Stadium in a 1.30pm kick-off. 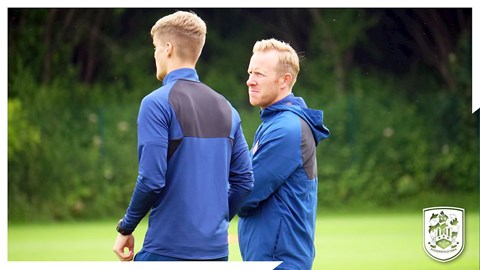 WATCH THE B TEAM AT TADCASTER ON SATURDAY!

One of the B Team players who will be involved is midfielder Josh Austerfield, who is relishing the prospect of being back on the pitch so soon.

“I can’t wait! You always look forward to the first game of pre-season as soon as you get back in the building,” Josh told HTTV.

“As soon as the whistle goes, I’ll be looking to get straight into the game and come away with the win.”

Although every player looks forward to the games, Josh understands the importance of the work on the Canalside pitches at this stage of the season.

“Nobody looks forward to the running; you just want to get stuck straight into the football, and that’s not always the case. You have to stick with it for the first few weeks.

“To get in the First Team here, or any of the Academy teams, you have to be super fit. You can see that we have to be fit given the way we want to play and press.”

Having made his First Team debut under Carlos Corberán last season, Josh realises he is now one of the senior players in the B Team squad – and that comes with responsibility.

“Scotty (High) has been above me for a few seasons and now he’s stepped up to the First Team, so I do feel that the leadership role has come to me a bit. We have a few young players in our changing room now and I’ll do all I can to look after them and make them feel comfortable.

“They have to be ready for the battle. We’re not going there simply to play nice football – we have to show what we’re about. As players, we have to be prepared for the physical test.”

Austerfield is also relishing the idea of playing in front of supporters again, with a maximum of 675 able to attend at Tadcaster.

“I’m looking forward to it, as we haven’t had fans in a ground for a long time. It’s not just fans either; it’s our families. I can’t wait.”