Young Terriers win on the road

Town struggled in the opening stages, but went ahead through the talismanic Kit Elliott.

The second half also proved to be tough, however, goals from Ben Midgley and Andre Edionhon helped the Young Terriers to a 3-1 victory.

The first quarter of the fixture was fairly even, but neither side were able to generate any early momentum.

The Young Terriers took a while to grasp a feel of a gnarled surface, as they struggled to adjust to the pitch’s bobbles and their opponent’s vigorous approach.

The opening chance came in the 16th minute, as a cross-field delivery fell to the feet of the Yorkshire full-back, who spurned his half-volley high and wide of the upright.

Town looked to threaten on 25 minutes, with Jaheim Headley forcing an attack down the left before pulling the ball back to the edge. Elliott received the pass with his back to goal and looked to dance his way past his marker. But the defender hacked at the forward’s feet and managed to prise the ball away.

Town eventually broke the stalemate just after the half-hour mark. Kian Harratt peeled off his mark to receive a pass inside. The forward subsequently played the ball into Midgley and, with Harratt taking away a defender with his next run, it allowed Elliott to be played through, taking the ball onto his right peg and drilling it past the ‘keeper.

Moments later, Ernaldo Krasniqi went inches away from doubling his side’s lead, curling a distanced effort onto the inside of the post and seeing it bounce across goal and agonisingly wide.

Town finally grabbed hold of the game, putting Yorkshire Select on the back foot after their opener. Elliott was denied a second on 40 minutes, as a defender managed to hook a dangerous cross from Harratt away from the forward’s path.

The final chance of the first 45 fell to the home side, who struck wide of Jacob Chapman’s right-hand post from a free-kick.

The second half was similar to the first period, as both sides ebbed and flowed in the early stages.

On 54 minutes, Chapman was forced into action to keep his side ahead. Select found an opening and played the forward clean through on goal. But Chapman made himself big and saved the attempt.

On the hour, Yorkshire went close again as Josh Okpolokpo misjudged a dangerous ball towards the back post and slipped on the ball. However, Chapman raced off his line and dove on it before the forward could pounce on the loose ball.

The hosts continued to press for an equaliser and, despite Town retaining the ball more, it was Yorkshire Select who looked the more threatening.

With 20 minutes remaining, Okpolokpo made an important intervention at the back post to deny Yorkshire a certain tap-in.

Moments later, Edionhon should have put breathing space between the two sides, as he saw his front post strike pushed over the bar.

However, Edionhon set up Town’s second just a minute later, as he slipped a pass through to Midgley, who calmly stroked the ball past the goalkeeper.

Midgley’s strike was an important one, though, as Yorkshire halved the deficit from a spot-kick after Chapman brought down the Yorkshire forward in the area.

Select pressed again and would have equalised if it wasn’t for Tom Bamford’s superb challenge just inside the area.

Myles Bright went close to sealing the victory, but he could only turn wide from the edge.

Town did, however, bag their third with three minutes to go, as Edionhon latched onto a through-ball, rounded the goalkeeper and rolled the ball into an empty net.

It was an important experience for the Young Terriers to endure, playing on a rutted surface and being forced to sit back and defend for periods. 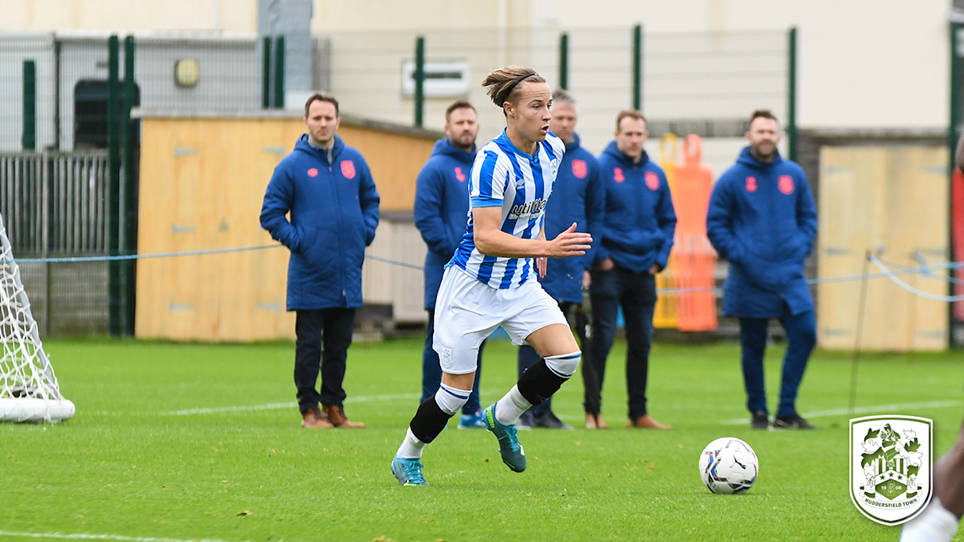