Danny Schofield happy with another good test for Huddersfield Town B

Huddersfield Town’s B Team Coach Danny Schofield was pleased with the way his side recovered from a difficult start against Blackburn Rovers.

The Young Terriers struggled to stamp their authority on proceedings early on and found themselves a goal down within the opening 20 minutes but showed character to ensure it ended honours even.

Mustapha Olagunju and Kian Harratt were on the scoresheet for Town to earn a 2-2 draw and Schofield was satisfied at how his youngsters were able to adjust aspects of their performance to turn the game back in their favour.

“I think it was a case of trying to find solutions. They pressed very aggressively with three players locked onto our two centre-backs and positional midfielder when we tried to play out,” he said.

“We had a plan of how to play by dropping our players in and playing a longer pass into the seven (Jaheim Headley), nine (Kian Harratt) and 11 (Patrick Jones) which sometimes worked and other times didn’t. It was certainly a challenge playing out from the back but one I think the lads adapted to quite well.” 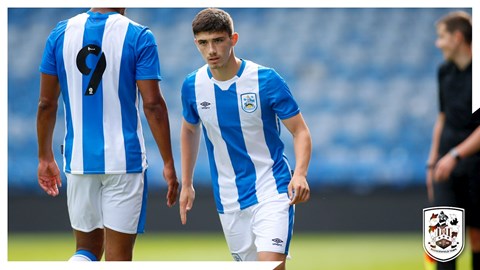 Town were operating with a slightly different tactical setup in comparison to their previous B Team fixtures, with midfielder Josh Austerfield often dropping in as a third centre-back when the Young Terriers were in possession.

Schofield explained how this was still a work in progress but believes it will prove beneficial in the long-term due to its similarity with the First Team’s style of play.

“We tried to initially build with Josh (Austerfield) as a three, something we replicated from the First Team.

“I think we had varying degrees of success with that; at times Josh could have played a bit higher and played almost like a two and a one with the centre-backs, but this is something we are working on and developing in terms of our build.

“I’ve said in previous interviews about alignment with the First Team and I think the more we do that, the more successful we will be as a Club in developing football players capable of making that step up to the First Team’s requirements.”