Town to pay tribute to those lost in armed conflict

Huddersfield Town is proud to use the Sky Bet Championship fixture against Luton Town as the Club’s annual Remembrance Game.

The Terriers will make tributes to honour the work done by the Armed Forces and remember those who have given their lives protecting our country.

As the teams enter from the tunnel, the Club Captains from both sides will take poppy wreaths to the centre circle in tribute to those lost in armed conflict.

Joe Hainsworth from Terrier Brass, and a member of Hepworth Band, came down to the John Smith’s Stadium in the week leading up to the game to record ‘The Last Post’, which will be played out over the Club’s social media channels.

Alongside this, a minute’s silence will take place to remember and honour those who risked their lives to protect the country. 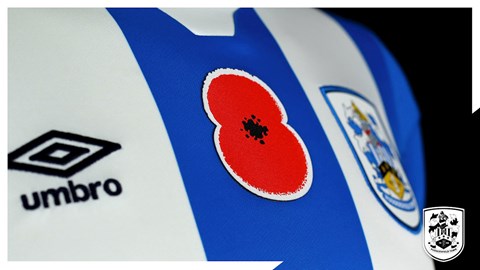 The players’ shirts will, once again, don the poppy emblem and after the game the match-worn shirts will be auctioned off to raise vital funds for the Royal British Legion.

Additionally, special poppy bin badges featuring the Town crest can be purchased via htafcmegastore.com, so you can support both Huddersfield Town and our fallen heroes, with all proceeds donated to the Royal British Legion.

“We are proud to pay our respect to the armed forces at the Luton Town game this Saturday.

“On behalf of the Club I would also like to thank Joe Hainsworth from Terrier Brass for his moving rendition of The Last Post which we will share with supporters prior to the game- albeit sadly not in person at the Stadium.

“Through the sale of poppy pin badges and the match-worn shirts, vital funds will be raised for the Royal British Legion to help them make a difference in the lives of servicemen and women, veterans and their families.”