The 2020/21 campaign has not been an easy one for anyone involved with Town’s Women, but they’ve battled through the circumstances and sit top of the FA Women's National League to date.

Summer’s lockdown was a testing time for us all, but manager Jordan Wimpenny and his squad used the extended off-period to their advantage. Organising three zoom workouts a week at a minimum, the new man in charge made sure that his players were ready and raring to go when it was safe to do so.

Having taken the reigns from long-serving manager Ashley Vickers in March, Wimpenny had to wait the best part of six months to stand on the touchline, but once he was there, he couldn’t get enough.

“Taking over in the time and manner that we did was quite unusual, but this gave me and the staff an opportunity to look at the club from top to bottom and begin to build the identity that we wanted to develop.

“From working with the players prior to taking on the management role, I knew the potential not only of the players as individuals, but the group as a collective, and I was keen to make that a priority for them to achieve what they can and remind them of how good they really are.”

The season started with a dramatic 3-3 draw against Fylde FC at the Stafflex Arena in a battle between the top two sides in the league going into the second lockdown. Kate Mallin and Brittany Sanderson struck in the first 45 before Lucy Sowerby’s 25-yard screamer saw Town take a point. Given that the Terriers also hit the crossbar three times in the second half, they were desperately unlucky not to take more from the game.

The same can be said for the first away fixture of the season against Burnley when Town missed a last-minute penalty in a 2-1 defeat, but there was no time to rest on their laurels as a trip across Yorkshire to face Hull City came just three days later. 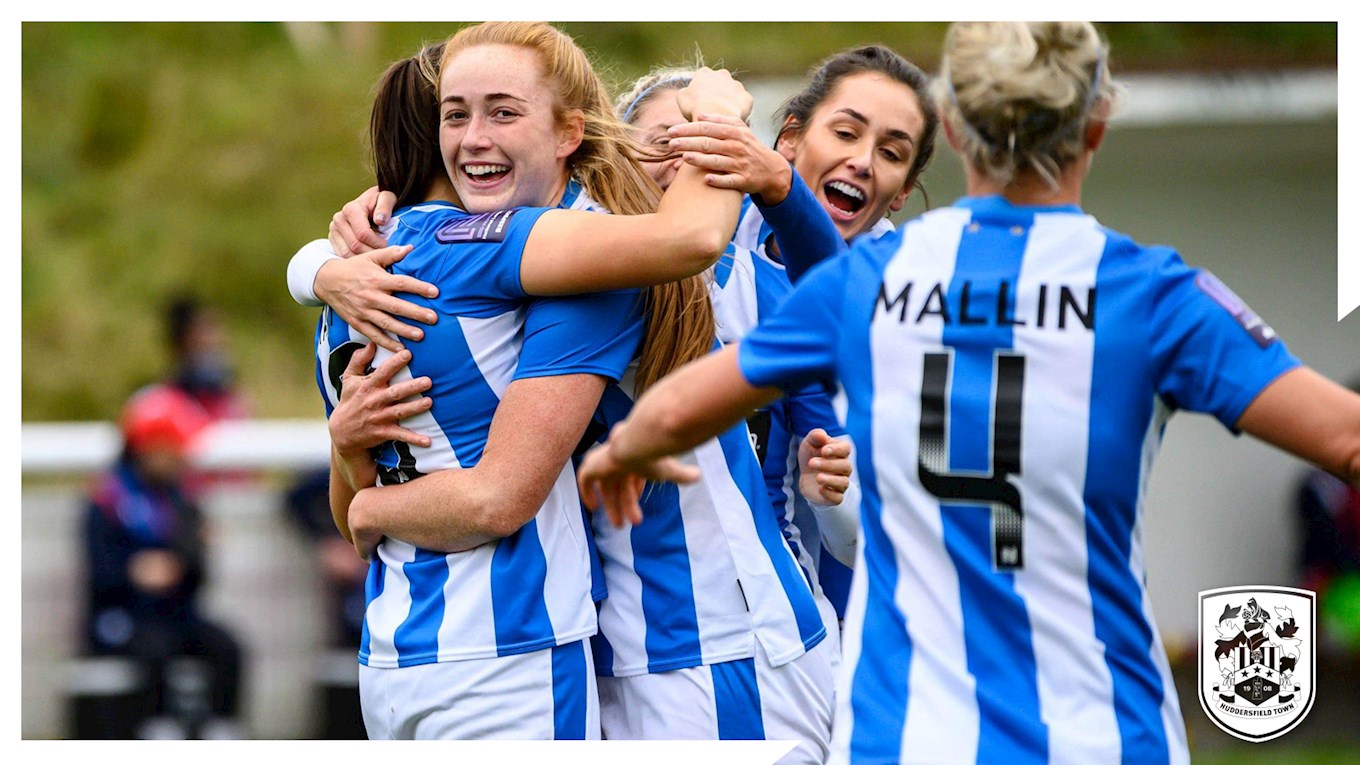 Pre-season’s top scorer Laura Elford (above) had missed the curtain-raiser against Fylde and began the Burnley game on the bench, but took centre stage on her first start of the season.

The Tigresses took a shock lead early on, but the Terriers fought hard in the torrential rain and Elford’s brace turned the game on its head. First, a looping head found the far corner before a far simpler close-range finish sealed Town’s first win of the season.

Town’s no.10 was delighted to get off the mark.

“It was really important to get the first win of the season. We need to keep working as a team because we all share the same goal.

“It’s always nice to score – and to score the winner – but the goal comes through the whole team before it gets to me so it’s a great effort by everyone. Long may it continue!”

And they never looked back.

The win in East Yorkshire was backed up by an impressive 3-0 victory against last season’s runaway league leaders Sunderland – who were denied promotion due to 2019/20 being declared null and void – before the journey up to Teesside to face in-form Middlesbrough.

Arguably the hardest game of the season, Town took a while to get going, but two Kate Mallin goals in as many minutes saw them lead at the break and Sarah Danby’s first of the season sealed a third-straight win after Sanderson turned the ball home from six yards.

Then, it was the big one. Nottingham Forest had opened up a three-point lead at the top of the table and were tipped by many to be the best team in the league. Only a win would see the Terriers close the gap – and that’s exactly what happened.

Full-back Beth Stanfield’s only prior goal for the Club was a thunderbolt in last season’s 6-0 win at Middlesbrough, but the defender doubled her account in sensational style with volley inside the area to open the scoring and, despite Forest drawing level just before the break, Mallin’s wonderstrike into the top corner with just five minutes left sent Town joint top of the table.

“We always set our goals to win,” said Manager, Wimpenny. “To beat any side for us is a big achievement as each game in this league is tough and this has been proven in the games we have already played in and no doubt will experience again after lockdown.”

The following weekend saw Forest drop further points in a 2-2 draw at home to Hull and Town’s hard-fought 2-1 win against Sheffield FC saw them stay level with Fylde at the summit.

With rumours of impending lockdown spreading through the news, everyone at the Club knew that the visit of West Bromwich Albion was likely to be the last time they stepped onto a pitch for a while, so they made the most of it.

Fylde’s game was postponed on game day which meant one thing – any kind of positive result would send Town’s Women out on their own at the top of the table.

Sanderson struck an early screamer to give the Terriers a dream start, but the Baggies equalised before taking the lead 15 seconds into the second half.

Wimpenny brought last season’s top-scorer Sowerby off the bench to give Elford support and space up front and it did the trick!

Sowerby pulled out to the left, enabling Elford to find Sanderson in the middle of the area and Town’s no.11 finished beautifully into the bottom corner and, just three minutes later, Elford got on the scoresheet herself when she fired past the ‘keeper from close range to send the Terriers three points clear at the top of the table.

The Manager knows that his side were on a roll before the postponements, but is confident that the team won’t be affected.

“Lockdown is the same for every team in our league. We may question the impact of our current momentum, however, we have collectively gone through the experience of a lockdown before.

“What we will do is train, rest, reflect and prepare for when we come back. We’ll remind the players of the successes they were having before lockdown and ensure that everyone’s mentality is in the best place to continue that level of performance again once we return.”

There is no definitive date for when the FA Women’s National League will return, but one thing is for sure – when it does, Town will be ready.