What do you think of when you hear Neil Warnock and Huddersfield Town? That half-time team talk at Shrewsbury? Andy Booth and Ronnie Jepson? Or the 1995 Play-Off Final win?

Well, the former Huddersfield Town Manager caught up with #HTTV to give his own personal take, and some stories that have not previously been revealed, on that incredible afternoon at Wembley Stadium in 1995.

After beating Brentford dramatically in the Play-Off Semi-Finals, Town faced Bristol Rovers for a chance to be promoted to the second-tier of English football.

Warnock, a man who had previous Play-Off success in his career, explained that he used that to his advantage.

“I copied exactly what I did when I was at Notts County. I booked the same hotel, the Hilton overlooking the ground.

“We went to the Belfry for three or four days the week before to take their minds off it, to have a game of golf, a laugh, a joke, a night out in a nightclub.

“I said to Ronnie Jepson make sure you keep hold of Darren Bullock won’t you, he’s your responsibility. I think he had Bully by his hand in the nightclub!,” laughed Warnock

“When we came back, I told the lads get all your tickets for your family sorted and out the way, I don’t want anything coming into our thoughts next week from Tuesday onwards.

“They came back and Tuesday onwards they were spot on. I just knew we were a better team than Bristol Rovers.”

After excellent preparations, Town travelled down to London ready for the Final.

Arriving at the Hilton hotel the day before, Neil explained what he did to make sure his players weren’t overawed by the occasion on the day of the game.

“I knew everybody at the Hilton, so on the morning of the match, I’d sorted the lads out. I slipped some people a few quid, so they let us take the kit down to Wembley early.

“I gave our lads a voluntary on whether they wanted to come but made sure most the lads came when we put the kit out.

“We shouldn’t have done that, but they came in and saw the dressing room, went out and had photographs on the pitch when it was empty, and we got that out of the way.

“I could tell the lads were ready. We had a laugh on the pitch about pictures and things like that. I remember Jon Dyson asking me if I wanted a picture and I said ‘no, no I do this regularly Jon’. It was good to get that out of the way.”

Knowing the jokey, close-knit nature of his squad, Town’s Manager, even on the day of the Play-Off Final, decided to ease the pressure on his players.

“At lunchtime, 12pm, when we had our pre-match food and video, we could see all the fans coming down Wembley Way; it was fabulous.

“We put Chubby Brown on and that took their mind off it. We had a laugh for 30 minutes at Chubby Brown and got on our way to the ground.” 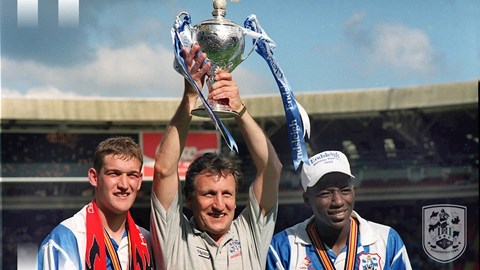 The match itself is something that will stay strong in the memories of Huddersfield Town supporters, and for Neil Warnock, but not only for the occasion!

“One of the most difficult periods I’ve ever had in the game was the half-time team talk in the Final.

“It was amazing coming out to the fans, as hot as always, and then we started. I thought we started well, a little cagey but alright, and then we proceeded to dominate the game. I was so disappointed we weren’t 2-0 or 3-0 up at half-time.

“We were so relieved when we scored, we were thinking ‘thank goodness for that’ because we battered them. Then in a flash they equalised in injury time, it was such a blow because we played so well.

“As we were going in, I said to Mick, ‘listen Mick I’m not very often at a loss, but I’m going to have to get myself right’. He said, ‘let’s get the lads inside and have a chat in the shower area’.

“The lads came in and they were all flat. To concede a goal like that, a bad goal, to make it 1-1, it wasn’t a time for rollicking, having a go and pointing fingers because we had another 45 minutes to go.

“We went into the showers and I remember Mick saying, ‘this is down to you now gaffer, you’ve got to lift them’.

“When I went out for that half-time team talk after, it was probably one of the most difficult ones I’ve had to do. I had to inspire them, I had to give them a kick up the backside and convince them how good they were.

“I knew after half-time that they would come at us because they just got the boost of a goal. The lads went out in the right mindset, they came at us, but the lads were super at the back.

“Gradually we got back into the game, about 20 minutes into the second half. I thought if we could get another goal, we’d win it.

“Gary Crosby was playing, and I substituted him. He wasn’t very happy, he came over and I thought he was going to take his shirt off and throw it at me, but he just gave me a look.

“I brought Iain Dunn on - he’s got no hair we don’t care, what a lovely lad he was – straight away he got the ball, did a mazy dribble, crosses the ball and Chris Billy heads the ball, a bullet header, it was such an amazing header and I was so pleased for Dunny.

“To be in front, we knew we were in with a good chance, even if we did have to hang on. We had a few hairy moments, but when that whistle went it was just amazing really. I just wanted to make sure that I got Huddersfield Town promoted.

“The main thing was the fans, celebrating on the pitch and then to go up the motorway, all the way up there were blue & white scarves on the cars.

“We took the bus round Huddersfield two or three times; the noise, the horns were just amazing.

“The celebration was fabulous; a great evening and Town fans still talk to me about it to this day.”

Watch Neil Warnock’s full interview as he discusses his time at Huddersfield Town below on #HTTV!


Yaya Sanogo can’t wait to get going at Huddersfield Town

CARLOS: THE TEAM COMPETED A LOT

CARLOS LOOKS AHEAD TO BIRMINGHAM VISIT