With the 2019/20 campaign at an end, several of Huddersfield Town’s First Team and B Team players have returned to the Club following completions of their respective loan spells.

A total of 14 Terriers, from the senior side and the Club’s newly formed B Team, played their football in countries such as Scotland, France and Egypt, as well as here in England, during the recent campaign.

With their respective spells now coming to an end, htafc.com has looked at how they got on.

After joining the Robins for the second half of the campaign, Edmonds-Green helped the Club to become Sky Bet League 2 Champions.

The Wiltshire club’s season was ended in March due to COVID-19, with the Club earning promotion to League 1 on the points per game system.

Despite having the season cut short, ‘Rams’ made an impact during his brief spell at the County Ground, tallying up three clean sheets and a goal in nine-appearances from centre-back, as well as winning the Robins’ Player of the Month award for February.

That was the latest progression for the talented defender, who excelled in a loan spell with Brighouse Town last season before joining Bromley on loan at the start of the 2019/20 campaign.

He returned from Bromley in December to make his competitive Town debut in the win at Charlton Athletic in December before heading to Swindon. 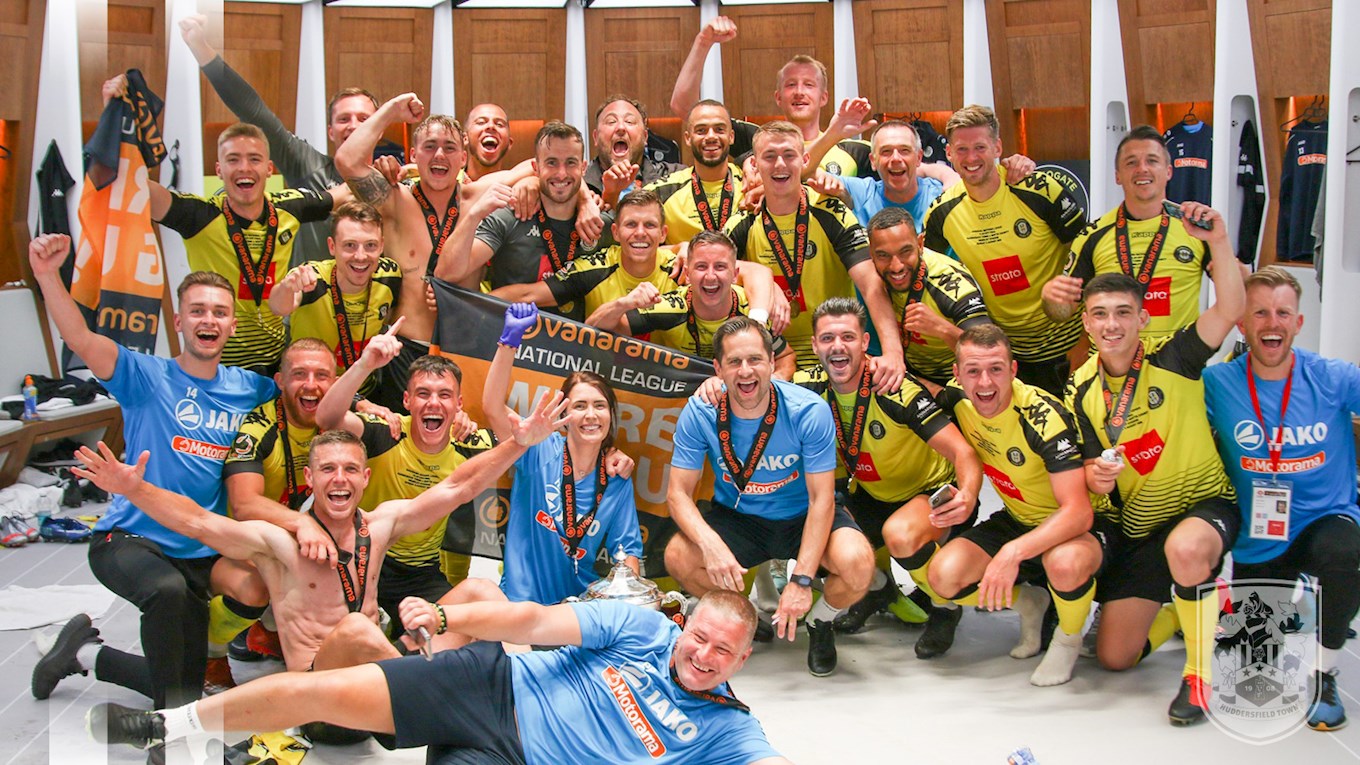 The young forward was part of the Harrogate squad that were promoted to Sky Bet League 2 at the weekend following a 3-1 win over Notts County in the Vanarama National League Play-Off Final at Wembley.

Having originally joined the Club on a one-month loan back in January, Harratt had his loan extended until the end of the regular season before joining back up with the Harrogate squad for the Play-Offs last month.

The 18-year-old, who has made one appearance for Town’s First Team, was an unused substitute in both Play-Off games but sees a valuable loan experience at the CNG Stadium come to an end with seven appearances and one goal to his name.

In order to get more experience, the Huddersfield-born goalkeeper made the move up to Scotland to join Premiership side Livingston until the end of the season.

Having made both his senior and Championship debuts for Town this season, the 20-year-old took the next step in his development by joining up with Gary Holt’s side in January.

Schofield made three appearances for the Lions, two of which came in the Scottish Cup, with his league start coming against Rangers at Ibrox. Unfortunately, a small injury curtailed any chance of further minutes north of the border.

Hamer returns to West Yorkshire off the back of a loan spell that saw him play 27 times for fellow Sky Bet Championship side Derby County.

The goalkeeper finished the season with a run that saw him start 25 of the Rams’ last 28 league games.

The 19-year-old had his first taste of senior football this season after joining the Vanarama National League South side on loan in 2019/20.

After originally joining the Essex Club on a loan that spanned nearly a month towards the back end of 2019, the midfielder returned to Concord for the remainder of the season in late February.

With the virus bringing an early end to the Beachboys’ season just over a week after his move back down south, Town’s Under-19s Captain could only add two appearances to the six and one goal tallied up in his first spell at Thames Road earlier in the campaign.

Since returning from that spell, High has made his senior Town debut and joined Sky Bet League 1 side Shrewsbury Town on loan for the 2020/21 campaign.

The young forward was part of the Millers side that earned automatic promotion to the Sky Bet Championship following a second-place finish in League 1 on the points per game system.

After making the loan move across Yorkshire in January, Koroma made five appearances during a shortened spell at the New York Stadium.

The full-back returns from Turkey with 13 games in the Turkish Süper Lig under his belt, having joined Kasımpaşa on loan in January.

The Kosovo international helped the Apaçiler to a tenth-place finish in 2019/20 after the season concluded last month, having restarted behind closed doors in June.

Sobhi returned to his native country last summer to play for Egyptian side Al Ahly on a season-long loan.

The winger has made a total of nine appearances, scoring five times and getting one assists across games in both the Egyptian Premier League and the CAF Champions League.

Mbenza returns to Town following the conclusion of his loan with French Ligue 1 side Amiens, who he joined in February 2020.

Unfortunately, the forward could only make three appearances for Les Licornes before the season was ended due to the COVID-19 pandemic.

Having signed for the Terriers in the summer of 2019, the attacking midfielder made one First Team appearance before a January 2020 loan move to The Posh.

After his debut at Burnley in the Emirates FA Cup, Brown featured 10 times in Sky Bet League 1 as the Club just missed out on a Play-Off place by a point when the season was curtailed.

The winger played a total of 348 minutes for the Tricky Trees in the Sky Bet Championship after making the loan move to the City Ground in January 2020.

Diakhaby made 14 appearances, all in the league, as Forest narrowly missed out on a Play-Off position on the final day of the season.

The defender’s loan, along with the Cottagers’ season, ended with the Sky Bet Championship Play-Off Final at Wembley, as Fulham made their return to the Premier League.

Having made his debut in a tough cup game against Manchester City, Kongolo unfortunately sustained a season-ending injury on his league debut against Blackburn Rovers in February.

The 18-year-old spent most of the season at Edgeley Park and helped the Hatters to an eighth-place finish on their return to the Vanarama National League following promotion in the previous season.

After originally joining County on a season-long loan in the summer, he was recalled to join up with the First Team squad in December before signing a new contract with the Club and re-joining Stockport for the remainder of the season nearly month later.

Most comfortable operating from the left side of the pitch as either a midfielder or a defender, Jackson made 24 appearances in the National League in 2019/20, scoring once.

The young defender was part of a Welling side that finished the Vanarama National League South season in 13th place, after joining the sixth-tier side on loan in January.

He really impressed with his new side, scoring once in his six league starts during an impressive run of results. Unfortunately, his season was ended early after suffering a broken bone in his face in his final appearance. Thankfully, Romoney has now fully recovered following an operation.