With the Sky Bet Championship season postponed until further notice, Huddersfield Town teamed up with Infogol to look at the campaign so far from a data perspective.

What is Expected Goals (xG)?

Expected Goals quantifies the quality of a scoring opportunity, allocating each chance a probability of it finding the back of the net.

The xG metric can be used to assess teams and their performances, and it also helps to give an insight into future prospects.

Tricky questions such as whether a team is overperforming or underperforming, or whether a side is likely to maintain its current form, can be answered with xG.

Town suffered a difficult start to the Sky Bet Championship campaign and has been since involved in a relegation battle. The Terriers currently sit three points above the drop zone in 18th place at this moment in time.

In terms of expected goals, Town are 17th in Infogol’s table, creating chances equating to just 1.21 xG per game. 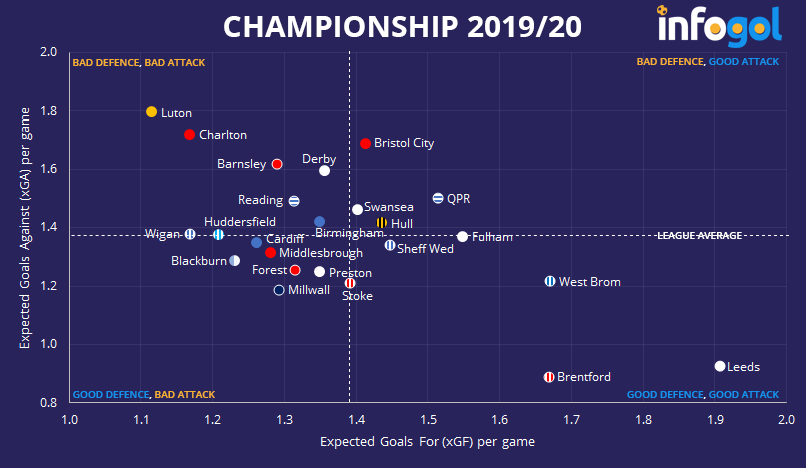 They have been a relatively solid defensive unit, though, allowing a league average amount of chances per game (1.38 xG).

According to expected goals, Town should be optimistic. Despite a difficult start to the season, the Terriers have gradually improved since the arrival of the Cowley brothers.

As shown by their 10-game rolling xG average (below), Huddersfield Town’s level of performance has steadily risen over the course of the season.

Town’s expected goals for trendline has moved above their against trendline in recent times, displaying the sharp upswing in underlying process. 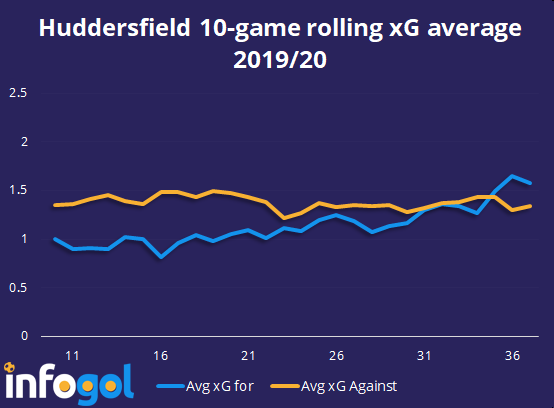 Karlan Grant is a clear standout from an actual and expected goals perspective, scoring 16 goals in what has been an excellent season for the young attacker.

Grant has recorded more than double the amount of xG than any other player in the squad, getting on the end of chances equating to 14.83 xG (Mounie next best, 7 xG). The recent move to a wider position has not curtailed his production in attack.

Grant not only possesses the ability to put himself in scoring positions, but he sits behind only Juninho Bacuna in expected assists (xA) for Town this season, and leads the side in ball progression, despite a fairly high turnover rate. 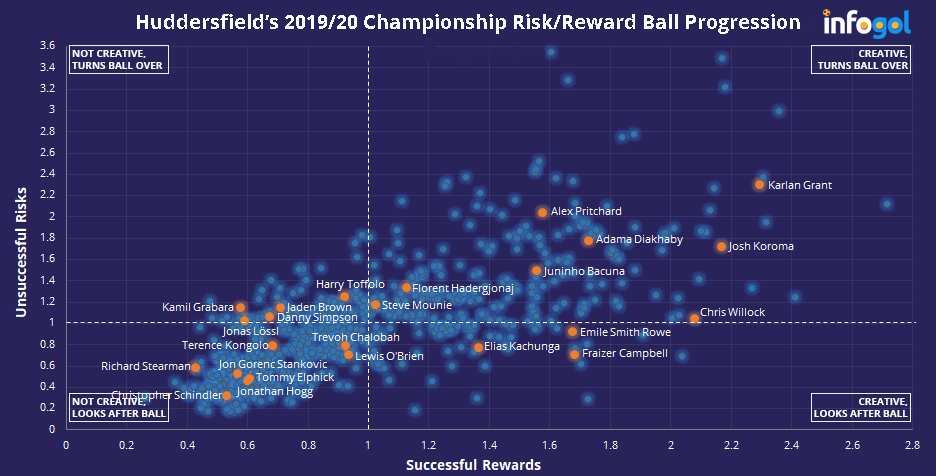 January loan signings Emile Smith-Rowe and Chris Willock have been good additions to the squad.

Despite the small sample size, both youngsters rank highly in Infogol’s non-shot xG model, which considers ball advancement, protection and much more. The pair are above average for creativity in ball progression, while looking after the ball relatively well.

Smith-Rowe’s underlying numbers have been particularly impressive since his arrival, registering 2.43 xA in just 728 minutes. That is an average of 0.29 xA per 90 minutes.