Town showed a real resilience to come from behind and secure a point against hosts Blackburn Rovers, taking the current unbeaten run to four games.

A second-half goal from Juninho Bacuna – his third in as many games from the bench – resulted in a 2-2 scoreline at Ewood Park that was fully deserved, taking the current run under Danny and Nicky Cowley to eight points from a possible 12.

Town started the game well and took the lead through top scorer Karlan Grant but lost their way after a mistake led to the equaliser and trailed at the interval.

Things improved in the second 45, with Bacuna’s goal just rewards in an even game that ebbed and flowed.

Adama Diakhaby was the standout player in the opening 15 minutes – credit to him after he had suffered with illness in the week – and he had a big hand in winning a 12th minute penalty that gave the Terriers the advantage.

The Frenchman collected his own blocked shot to the right of the Blackburn area before showing quick feet to drive past makeshift left back Elliott Bennett, who felled the winger in a clumsy fashion. The referee pointed to the spot and Grant stepped up, sending the goalkeeper the wrong way for his seventh of the season.

Blackburn looked nervous as Town continued to press them high, but an error gifted them a way back into the game in the 20th minute. Trying to play out, Tommy Elphick’s attempted square pass to Schindler hit a Blackburn player and gave up possession. The hosts were clinical in taking advantage, with Bradley Dack played into the area and his square pass being swept home by Lewis Holtby.

Town lost their way a little after that goal, dropping too deep and playing the ball long – straight into the hands of the Blackburn centre backs. That allowed the hosts to build momentum, with Holtby sending a snapshot inches wide before having a big hand in the second. He collected the 33rd minute throw-in on the edge of Town’s box before allowing Dack to stride onto the ball and smash it past Grabara’s dive in impressive fashion.

Both sides created chances as the second half got under way, with Armstrong pulling a shot just in front of the outstretched Dack before Grant was denied by a good block on the counterattack.

On came Bacuna, who is quickly earning a reputation as a game-changer. He had already shot wide after good work from Lewis O’Brien before his equaliser, when he received the ball after a one-two with Grant and worked it onto his left before dragging a shot past the unsighted Walton.

Only a superb tackle from centre back Derrick Williams denied Grant after he seized upon an errant Rovers pass soon after as Town turned the screw. O’Brien soon had a vicious drive blocked and then Elphick headed Grant’s deep corner wide.

Bacuna had more shots than any other player in an exciting 30-minute cameo and his deflected 20-yard drive – which came after a lovely drop of the shoulder to beat Bradley Johnson – had Walton back-peddling frantically as the ball dropped just over the crossbar.

Tony Mowbray introduced Sam Gallagher to the game and Blackburn went longer in search of a winner in the final stages, with the referee awarding several free kicks to the hosts. However, the Terriers held firm, with Grabara untroubled before the final whistle. 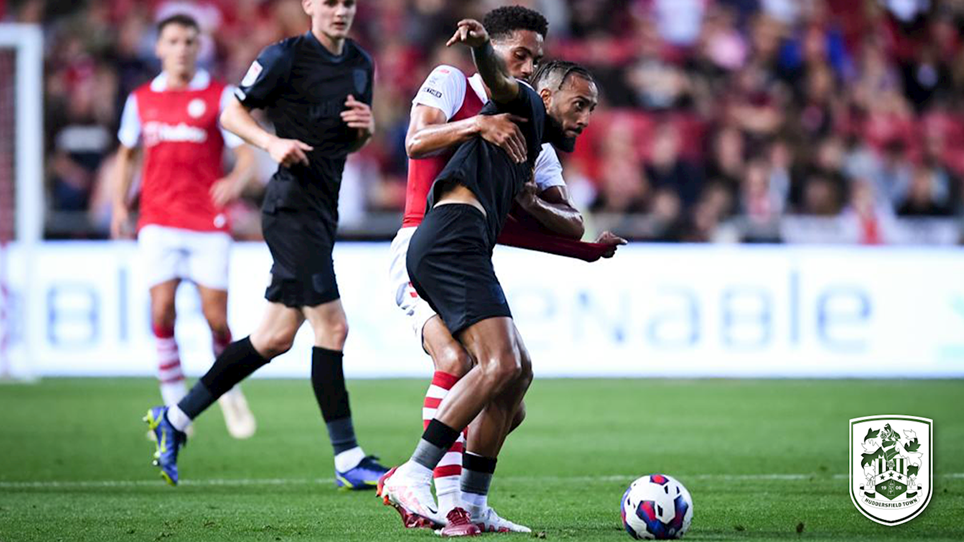 
Town defeated by a goal in each half at Ashton Gate