Young midfielder Tim Akinola is now preparing for the SPAX Cup in Germany after signing his first professional contract with Huddersfield Town.

The 18-year-old, who made 12 appearances for the Young Terriers whilst on trial, joined the Club from Lincoln City on Monday 3 June 2019.

Just days after signing the Club, he will join his Under-19 teammates and travel to Germany to compete against top European opposition in the SPAX Cup.

The youngster explained to htafc.com how delighted he was to sign a deal with the Terriers.

“At the start, I never thought it would be possible to sign for a club like this. I am really happy that I’ve signed my first professional contract.”

During his trial period with Town, Tim featured for both the Under-17s and the Under-19s but admitted that it took some time for him to get used to the Young Terriers’ style of play.

“When I first came I think I was a bit rusty and raw.

“I had to adapt to and learn a new style of play. I was still showing my talent, but I was a bit confused about how I was expected to play.

“Now, that’s completely changed, and I think I’ve been able to adapt to the game play.”

A year ago, the youngster was still playing grass roots football, primarily out-wide.

It was only at the start of the 2018/19 season when he turned into a central midfielder after joining Lincoln City.

Tim explained what the transition was like for him and how the Town coaches have helped him improve already.

“Playing in the middle of midfield suits my game more.

“When I played on the wing I was doing my defensive duties as well, so I was bobbing up and down. Now I play in a box-to-box role in centre-mid, so it’s the same thing just in the middle of the park.

“Playing here I’ve become technically better already, to be able to receive the ball and pass forwards for example.

“The coaches are telling me how to receive the ball, where to pass it and I’m already a better centre-mid because of that. 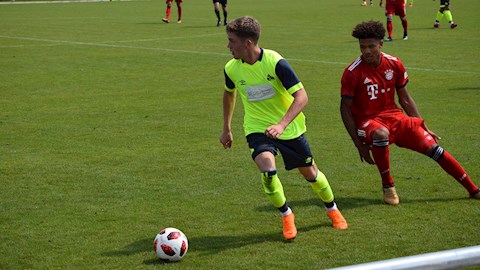 UNDER-19 SIDE TO COMPETE IN SPAX CUP

This weekend the Young Terriers will compete in the prestigious SPAX Cup in Germany, which will pit them against sides like Werder Bremen and FC Midtjylland – a tournament that Tim is very excited about.

“It’ll be my first time going on a football tour and playing football in a different country.

“I’m delighted to have the opportunity to play against teams from abroad and interested to see how their styles differ; it’ll be a really good experience.”

The Under-19s’ bespoke games programme tests the youngsters against every type of side from those playing men’s football to those in Europe.

And it was that programme that particularly thrilled the young midfielder.

“I am really excited about the variety of games we will play.

“When I was told about the Club, they said that our age group travelled to play against teams in different countries, so that made me even more excited.

“It’s a great opportunity for me to play football in other countries and to adapt to different styles of play.”

Academy Manager Leigh Bromby will take the Young Terriers in the SPAX Cup and you can find out more about who they will face by CLICKING HERE!

The Under-19 squad for the SPAX Cup has also been named: