Goals from James Collins and Andrew Shinnie cancelled out Karlan Grant’s opener as Huddersfield Town were condemned to a 2-1 defeat by Luton Town.

Mark Hudson made one change for the trip to the Kenilworth Stadium as Fraizer Campbell came into the side in place of Alex Pritchard. A first start in Town colours for Campbell in place of Pritchard who was on the bench having picked up a knock during the week.

As expected, Luton Town started the game on the front foot. Town were put under significant pressure as they looked to build attacks from the back, with Kamil Grabara withstanding heavy pressure when kicking out from the back.

The tenacity of Jaden Brown created a dangerous opening for Hudson’s side early on, stealing the ball back from the corner and advancing on goal before cutting it back to Karlan Grant who was tackled just before he could pull the trigger.

Heavy rain descended as Town hit back with another chance. Adama Diakhaby played a neat one-two before powering through the Luton defensive lines and laying the ball off to Karlan Grant who was again shut off before he could strike at goal.

Diakhaby was causing Luton problems. Town won the ball back from a defensive corner and countered through Diakhaby on the wing, stepping past one man before firing a dangerous ball across goal that just missed Fraizer Campbell at the far post.

After a goalless first-half, Town broke the deadlock two minutes in. An attacking set-piece for Hudson’s side was cleared out to Terence Kongolo. He picked the ball up on the left side of the box, bounced a one-two off a teammate before crossing in to Karlan Grant at the far post to convert.

Luton made a change as they looked for a way back into the game, introducing former Terrier Izzy Brown in place of Jacob Butterfield; another former Terrier.

The hosts were awarded a penalty as James Collins nipped in front of Christopher Schindler just as he was about to clear and the ref pointed to the spot. Collins dusted himself off and drew the game level with a placed finish past a diving Kamil Grabara.

Luton went close again as the game was turned up to a frantic pace. Harry Cornick got the wrong side of Jaden Brown and squared towards Collins who saw the ball cut out by a great interception from Town captain Christopher Schindler.

Hudson’s side were withstanding heavy pressure as Andrew Shinnie fired one from range that whistled just over the bar.

Just a moment later Shinnie put Luton level. The midfielder found time to turn on the edge of the area and curled a left footed effort that landed just inside Kamil Grabara’s post to give them the goal advantage.

Town were looking for a way back into the game and introduced Elias Kachunga in place of Rajiv van La Parra.

Town were looking for a leveller as Trevoh Chalobah curled in a cross from the edge of the area that floated just too high for Karlan Grant as his header on the stretch looped over the bar.

The referee allocated five minutes of additional time and after some heavy pressure in the final-third, Town couldn’t find the equaliser as the referee blew time on a defeat for Mark Hudson’s side. 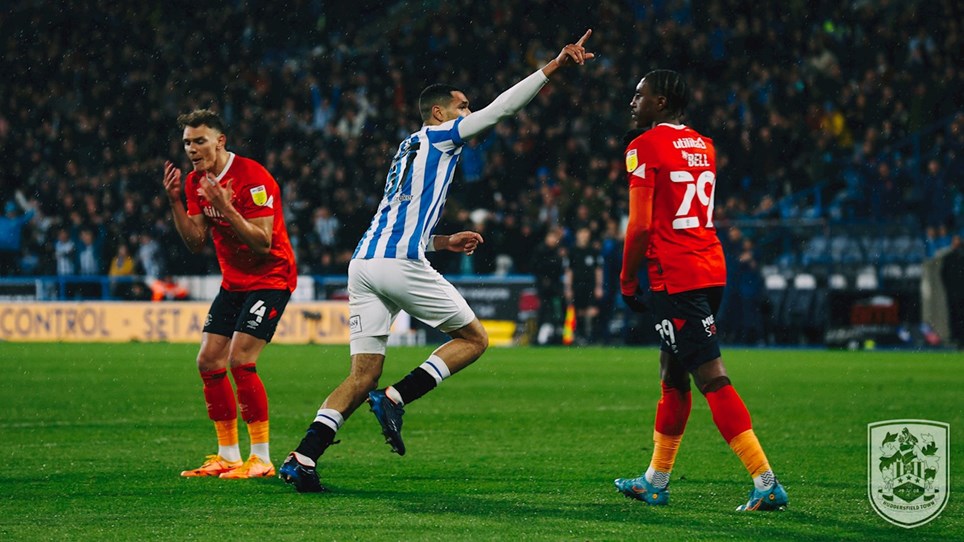