Huddersfield Town’s Under-19 and Under-17 sides are both in action at Wigan Athletic on Tuesday afternoon – and you will be able to watch one of the games live for free on #HTTV!

Mark Hudson’s Under-19 players will take on their age equivalents from the Latics at 1pm over at Wigan’s Christopher Park and the game will be available to watch on youtube.com/officialhtafc, courtesy of Proper Sport.

This will be the first game for the Under-19 side since the week-long stay in Portugal, when the Young Terriers drew with SC Braga before recording an impressive 1-0 win over Spanish side RC Celta de Vigo.

If you can’t be on a device to watch the game, you will be able to follow live text updates from the game on the Club’s official Academy account on Twitter - @htafcacademy.

At the same time, Leigh Bromby will lead the Under-17s against Wigan in the second game of the Clarets Cup competition.

A bespoke Under-17 tournament organised by Burnley, Bromby’s young team goes into the game on the back of a win over the hosts in the first game, which saw them top the table. 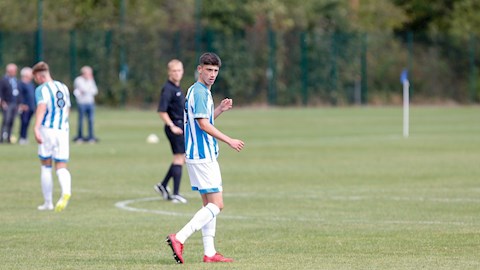 “This tournament, playing against opponents of the same age, gives our young side a different challenge in that we’re focusing on winning,” Bromby explained.

“In Youth Alliance games, the focus is purely on development and applying the elements we are working on in training. For example, we play out from the back regardless in our league games – even under immense pressure. We also let the players take a lot of responsibility, so they can learn as they go. That challenge is high for them currently.

“Now, in the Clarets Cup it’ll be more like a First Team game. If there’s a clearance to be made, I’ll be shouting at them to make it! There will be more guidance from the coaches with a view on getting the complete performance and the result.

“The different types of games give them balance. The lads are looking forward to the game and when they put all that we’ve learned together in these games, it shows them that they’re along the right lines. By exposing the players to both experiences, we’re trying to give them all the tools to make those decisions themselves in years to come.”

The Under-17s were defeated at Bradford City in the latest Youth Alliance game of the season on Saturday, with the team featuring three trialists; two aged just 15 years old.