Harry Kane's first-half brace sent all three points back to the Capital despite another battling Town display.

The England man angled in Kieran Trippier's cross before tucking away a penalty to wrap up the victory for Mauricio Pochettino's visitors.

Skipper Jonathan Hogg returned, alongside Alex Pritchard, as David Wagner made only two changes to the side that tasted defeat at Leicester City last weekend. Ramadan Sobhi and Danny Williams sat out the clash with respective knee troubles.

Instead of it being Mauricio Pochettini's men - hosting Barcelona in midweek - who flew out of the traps in a bid to follow up a 2-1 success at Brighton & HA, the Terriers looked like a side intent on delivering that elusive first win of the campaign.

Spurs were allowed no real time to get a high tempo attacking game going, hounded at every opportunity in the early stages. Chris Löwe's appeals for a penalty were waved away by referee Craig Pawson after Laurent Depoitre had done well to control a deep Erik Durm cross - the German starting a second consecutive Premier League match having made an opening appearance in that defeat at the King Power Stadium.

As always with the top sides in the top-flight, the north Londoners always carried a deadly threat when venturing forward. Danny Rose nodded wide fellow England International Kieran Trippier's cross just wide of the target as their side were on the back foot as the 10 minute mark went by.

Depoitre found a resilient Alderweireld in the way to deny a shot on the half-turn, ahead of Jonas Lössl making a fine stop to thwart the talismanic Harry Kane from chipping home an opener which had initially instigated from Alderweireld this time clearing his lines over the heads of the Town rear-guard.

Proceedings weren't the smoothest which seemed to be working in favour of a clearly determined Town outfit; a stark contrast to the events of the visitors' previous visit to HD1 when 25 minutes in the contest was basically over at 3-0.

Nothing of the sort on this occasion as yet; but against the even balance of play came a dagger to the heart as one of the World's most prolific strikers showed his class.

Kane drifted in between two blue and shirts to nod home Trippier's cross to hand Spurs what could arguably be described as an underserved lead having been limited to rare trips into the Town penalty area.

Going behind did little to deter the terraces ramping up that atmosphere, and Chris Löwe came within a whisker of sending them into delirium only to see Gazzaniga get down well to his left to palm away a thunderous low drive from easily 30 yards.

And as hopes began to reignite as the hunt for a quick equaliser, they were dashed in the blink of an eye as Kane scored from the spot. Florent Hadergjonaj, the man adjudged to have unfairly halted Danny Rose's progress into the box.

That second didn't knock the stuffing out of the Terriers, but partially allowed Pochettino's men a degree of control in a contest where they had to work hard for sights on goal.

Town pressed to halve the arrears as five added on minutes commenced. Laurent Depoitre must have wondered what he has to do to score as a vicious left-footed volley rattled off the under-side of the crossbar to let Spurs and a stricken Gazzaniga off the hook; a notion that pretty much summed up Town's luck in-front of goal once again despite turning out another positive first half display.

Lucas Moura had two chances to kill off the contest minutes after the interval. Firstly, Jonas Lössl dashed off his line well to bring the mazy run to a premature end, followed up by a perfectly timed Christopher Schindler intervention in the area after the Brazilian had latched onto Kane's weighted ball through the centre.

Moura was proving to be the go-to outlet for the away side. Another drive through the heart following an uncharacteristic Schindler slip was blasted wide as Town patiently chipped away to reduce the deficit.

Spurs hesitated to clear a cross which eventually fell to Alex Pritchard who tamely fired at Gazzaniga, with Heung-Min Son doing the same at the other end moments later stemming from Harry Kane's incisive pass to the left channel for a lightning counter.

Still it looked like Wagner's side were still very much in the game. Gazzaniga had to scramble in order to meet Philip Billing's downward header at the far post having met Aaron Mooy's flighted delivery.

Shortly after the Argentine was scrambling once again, this time producing a fine stop to keep out substitute Isaac Mbenza's corner-bound strike from the edge of the area, picked out upon the conclusion of Florent Hadergjonaj's surge down his native right.

Town may have been two down; but the effort and application had been top notch on yet another Premier League match day where that rub of the green just wouldn't fall their way.

In the end, the points headed back to the Capital albeit after a battle to ensure that two-goal cushion remained intact.

A trip to Burnley (Saturday 6 October 2018, 3pm) is up next for the Terriers ahead of the International break, before returning to the John Smith's Stadium to face Liverpool in three weeks' time (Saturday 20 October, 5:30pm). 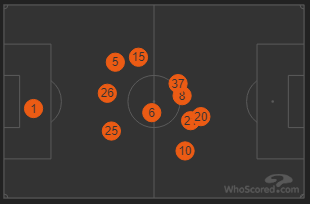