- Jonas Lössl on new role at Huddersfield Town
- Town’s ‘keeper becomes ambassador for equality, diversity and inclusion
- Jonas: “Football should be available to everyone”

“Football should be available to everyone no matter of race, gender, sexuality or religion” said Jonas Lössl after he was appointed as Huddersfield Town’s Ambassador for equality, diversity and inclusion.

The 29-year-old Danish ‘keeper volunteered to take the role but was keen to emphasise that everyone involved with Huddersfield Town should be an ambassador for equality in football, even if they don’t have the title.

“Everyone should be able to enjoy the beautiful game and feel comfortable watching their team in a discrimination-free environment,” explained Jonas.

It’s a topic close to the goalkeeper’s heart after he witnessed discrimination in a football match first hand.

“I’ve heard discrimination against fellow players whilst I’ve been playing a couple of times and it wasn’t nice,” said the Denmark international.

“A situation that stands out is when I played in France and some of the fans came with a lot of racist comments towards one of the other goalkeepers – it was just wrong.

“It was a hostile atmosphere and for us it was difficult to do anything else but perform well, win and stand together. We showed them on the pitch that what they were doing wasn’t right.

“It still takes place in the game all around the world and we all need to work together to get it out of the game completely.” 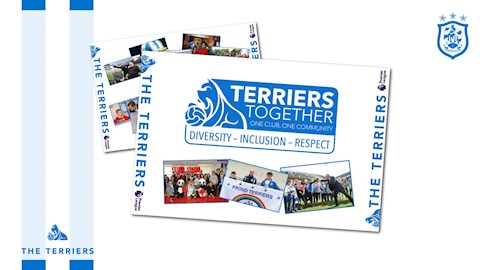 Town is showcasing its work on equality, diversity and inclusion during Saturday's game against Tottenham Hotspur as the Club continues to make a difference in the community.

The Terriers Together game was scheduled to be during National Inclusion Week and raising awareness of this is something that pleases Jonas.

“When I look at how we are here, at Huddersfield Town, in our locker room and around the Club, I don’t see the problem here.

“But I like the fact we are still raising awareness about it because it shouldn’t happen anywhere.

“Football is for everyone, it’s a beautiful thing and creates such a happiness in society.”