- Huddersfield Town’s Under-17s in action on Saturday
- Young Terriers host Preston North End in the Youth Alliance Cup
- Come and watch the 11am KO at PPG Canalside for free!

On the back of good performances in their last two outings, Academy Manager Leigh Bromby will look for further improvement from Town’s Under-17 side when the players return to action on Saturday morning.

The Young Terriers will host Preston North End in the second game of the Youth Alliance Cup campaign in an 11am kick-off at PPG Canalside.

The game, which takes place as one activity in the Club’s regular pre-match Fanzone at the training ground, is completely free to watch for Town fans, so why not come down before the First Team’s game against Crystal Palace and watch the potential stars of the future in action? 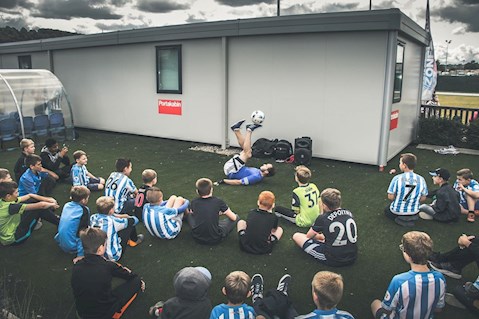 “We will focus on performance first, as always,” Leigh explained to htafc.com.

“The lads have worked very hard this week and it’ll be interesting to see if they can back up their improvements from the last few weeks in the game on Saturday.

“Preston is a good team, but I’m expecting a good performance from us. I’m looking for improvements from the steps forward we have already made against Burnley and Notts County in the last week.”

Alongside performances, results have taken a recent upturn – but Leigh believes there could be ups and downs in the score-lines as the squad is still learning the basics of team play, having only met for the first time around three months’ ago!

“The fundamentals are getting better through being here, such as defending set pieces, but that isn’t our focus yet. We know we can improve that aspect with them over two or three years. Our focus is still on our key principles; playing on the pitch, reactive pressure, getting our fight zone correct and making good transitions.”

Here are the goals from @KianHarratt, @JHeadleyOne & @darnell_mintus as the #htafc Under-17s put in a good performance against Notts County in the Youth Alliance on Saturday!#YoungTerriers (DTS) pic.twitter.com/4s1f3OFHB2

One of the big improvements that Leigh has seen from his young players has come in the work rate, as he explained.

“Our statistics show that the players’ running stats have increased dramatically recently. We’ve outworked the opposition in the last two games and that’s helped to deliver good performances. The players must ensure they are making smart runs and not running for the sake of it – make good runs during transitions and recovery runs when you need to.

“That’s encouraging though. You can see from the First Team how important it is to work hard as a fundamental and I think our Under-17s realise the importance of that teamwork more now. That comes through being here, seeing the videos, seeing the First Team train and in games.”

Another aspect that Leigh has seen improvement in – and that continues to be a big focus in training – is in the attacking third.

Leigh continued: “We’ve worked hard on playing in the opponent’s half, which is difficult. We’ve been working on making sure that, in transitions, the player with the ball doesn’t simply have one option; they have three or four. That’s what I want to see; that the players’ understanding of that has improved again.”