Mark Hudson was pleased with how Huddersfield Town’s Under-19s implemented a new style of play in a behind-closed-doors friendly against Southport.

The Young Terriers were beaten 2-0 by the Vanarama National League North side, however, the young players were tasked with using the ‘mid-block’ strategy – something they hadn’t used before.

In simple terms, the ‘mid-block’ system means that Town’s youngsters drop deeper into position and only press the opposition when they enter Town’s half.

Hudson explained to htafc.com why this was the perfect match for the youngsters to use this system.

“We watched Southport’s games building up to this match, saw the style they would play and thought it would be easier for us to get from back to front quite quickly.

“The use of the ‘mid-block’ gave us the opportunity to be in good positions defensively to pick up second balls, compete and have a good line.”

The youngsters hadn’t used this system in a game before, but Hudson was delighted with the way they took the information on board and implemented new the style.

“They showed that they understood it exactly, put it into good practice and played the game well; they broke the lines, created chance after chance but couldn’t put the ball in the net.

“Southport scored two goals from distance – both outside of the box – but I was still impressed because the lads took on board what I asked from them.”

This is one of the advantages of the bespoke games programme, that the youngsters have to use different systems to adapt to different styles of play.

“This experience of playing a bespoke games programme is invaluable, because it’s so specific to the youngsters, and directly links with what they could experience if they go out on loan.

“They’ll be playing against men, who have played the game or hundreds of games in and around league football, so they’re having to adapt to new situations.” 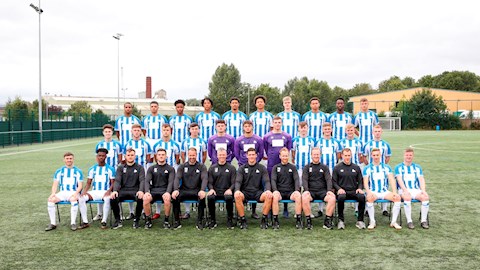 Town’s Under-19s are back in action tomorrow (Wednesday 24 October 2018) in the Second Round of the West Riding County Cup against Selby Town. The game will take place at Liversedge FC's Clayborn Ground (Quaker Lane, Cleckheaton, WF15 8DA) and kick-off at 7.30pm.

As per the rules of the competition from the West Riding FA, there is a mandatory £3 charge for adults to attend the game, with fans receiving a complimentary team-sheet upon entry.

If you cannot make the game on Wednesday evening, the full 90 minutes will once again be broadcast LIVE for FREE on Town’s official YouTube channel, HTTV at youtube.com/officialhtafc, thanks to our friends at Proper Sport. Live updates are also available on Twitter, @htafcAcademy.