Blue and White Foundation members voted Christopher Schindler as Huddersfield Town’s Player of the Season for the 2017/18 Premier League season.

The 28 year-old centre-half narrowly beat midfielder Jonathan Hogg to the award after all the votes were counted.

During the 2017/18 campaign, Schindler received the Player of the Month award the most winning it in August, September and November. 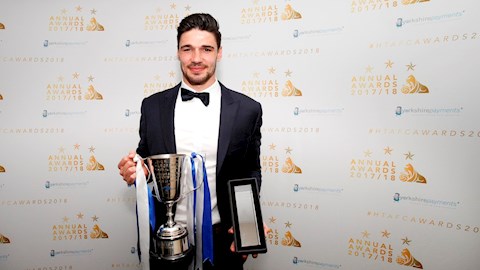 The German defender was top of the defensive charts for the Terriers throughout the season, after featuring in 34 games for David Wagner’s side.

‘Schindy’ has helped the Club keep eight clean sheets this season and has a 73% tackle success percentage. Not only this but he has also made 243 clearances, 69 interceptions and 134 headed clearances.

“It’s a great honour for me and shows the decent job I’ve done this year, which is really important for me. It’s even better if people recognise it and are happy with me and my performances.

“I’m really thankfully and want to thank everyone who voted for me, supported me and the Club.

“It’s a great thing for me because you are working the whole year through pre-season and in games, so standing out in my team is a big honour, a big thing and a massive achievement.”

You can watch his full interview below on #HTTV!

Blue and White Foundation member Mr Scott Bradley from Crosland Hill voted for Christopher and was drawn to meet him before Town’s final Premier League game of the season against Arsenal to present him with his Champagne.

There are plenty of benefits to joining the Blue & White Foundation:

- free Junior membership with mascot opportunity and junior fun days
- entry into the weekly ‘On the Move’ lottery with a chance to win £2,250 in prizes every week
- a weekly rollover cash prize draw up to £5,000
- chance to win the week 52 jackpot of £20,000
- entry into a weekly ‘Money Can’t Buy’ draw to win a VIP experience day out
- limited edition offers only for BWF members
- special ticket priority for away games and cup matches
- free PPG Canalside membership worth £5 per year
- discounted PPG Canalside gym membership £15 per month