“I expect a similar game as against Manchester City” said Scott Malone ahead of Town’s final Premier League away game of the season.

The Terriers face Chelsea at Stamford Bridge, just three days after securing a point away at Manchester City, and the left-back believes playing the two so close together could benefit the Club.

“I think it helps playing the two so close together, because it could be similar tactically.

“It’s easier than playing Man City, then teams further down the league before playing Chelsea again.

“The draw against Man City has given us even more belief, so back-to-back games against these types of teams is great.

“We have to go in the same mindset as we did against City. We have two finals left.” 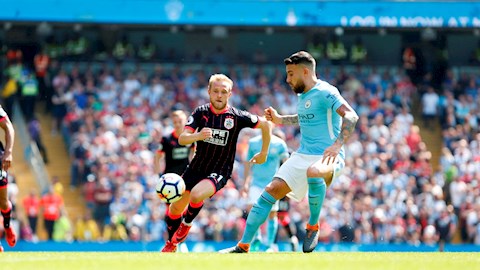 Despite only having 21% of the ball against the Premier League Champions and defending admirably, Town arguably created the better openings to take the lead, something Scott believes gives the players an extra boost going into Wednesday’s match.

“Internally in the dressing room we knew we had a chance against Man City, a small chance, but a chance and I thought we had the better chances in the game.

“After the chances we created against Man City and if we defend the way we did, then why can’t we go to Chelsea and pick up a win on Wednesday?

“The belief has grown. Confidence is high as we go into Wednesday.”

With such a short space of time between the two matches and the monumental effort put in by the Town players, Malone stressed to htafc.com how important recovery and preparation will be ahead of the Chelsea match.

“Recovery will be massive ahead of the Chelsea game. I only played 15 minutes and I felt it because the heat was zapping.

“We were all tired after the game, but we’ve come in recovered, trained and will travel Tuesday ahead of the match.

“This is the Premier League and we have to be ready for it.”

The left-back reserved his final comments for the fantastic Town supporters, who travelled in numbers to support the Terriers at the Etihad Stadium.

He has urged everyone to help the players as much as they can in the final two games of the Premier League season.

“The fans were fantastic against Man City and we heard them from minute one; outsinging the Man City supporters for the majority of the game.

“We will need them, once again, to travel in their numbers and get behind us.”

Why not listen to Florent Hadergjonaj's views on Town's match against Chelsea? Click here to subscribe to #HTTV+!