Hudson’s U19 side wins in Munich

Mark Hudson took an Under-19 side to Munich on Friday afternoon for an international friendly against German Giants, Bayern Munich. Two first half goals from Romoney Crichlow-Noble and Rekeil Pyke would turn out to be enough to secure the 2-1 win for Town.

The game was played in the stadium at the FCB Campus - Bayern Munich’s dedicated complex for youth football - giving the Young Terriers an experience of playing against top opposition in a different country.

Town started brightly as Lewis O’Brien had the first chance of the game after just 7 minutes forcing a save from the Bayern ‘keeper.

Just a minute later and Town took an early lead in Munich. 18-year old Dom Tear flashed a corner in across the box that picked out Romoney Crichlow-Noble who headed Mark Hudson’s side into the lead.

Buoyed on by the opener, Town continued to create chances as Mason O’Malley firstly fired dangerously across the face of goal before Olly Dyson drew a save after a superb flowing move from the Young Terriers.

Town nearly grabbed a second just before the half-hour mark. Lewis O’Brien optimised the ‘Terriers Identity’ as he won the ball high up the pitch and fizzed the ball across the face of goal. His cross found Pyke in the box, but he could only find the post with his strike as Town’s advantage remained at one.

The second goal would come just two minutes later though through Rekeil Pyke. After some good build-up from Town, Regan Booty collected the ball and played a through ball that sent Pyke through on goal, this time the Town front man made no mistake as he sent his side into a two-goal lead at half time.

Polish Under-19 international Marcel Zylla pulled one back for Bayern early in the second half as his free kick from 25 yards found the back of Luke Mewitt’s net in the Town goal.

The goal from Bayern would turn out only to be a consolation as Mark Hudson’s Under-19 side held out for the 2-1 win in Munich.

TEAM NEWS with @ViessmannUK: here is the #htafc U19 side chosen by @M_Hudson5 for this afternoon's international friendly against @FCBayern; 3.30pm kick off.#YoungTerriers 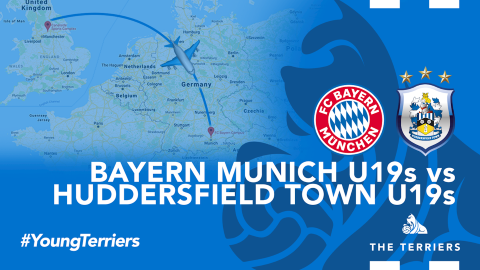