Huddersfield Town’s Under-17s showed an early understanding of the Terriers Identity as they competed in the Endorsed Cup.

The Young Terriers group - which is wholly made by of new, first year scholars - has been working hard with Academy Manager Leigh Bromby and Town’s Academy coaching staff to understand a completely new playing style. 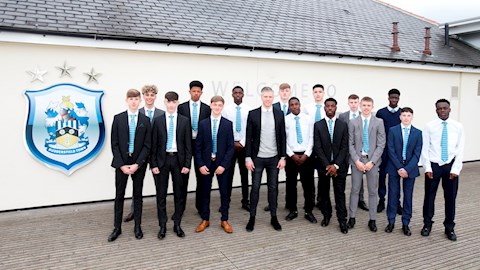 Town’s new scholars started at the Club at the beginning of July and Bromby has been running them through the early stages and fundamentals of the Terriers Identity and he believes that the Endorsed Cup was the perfect test to see how the youngsters could bring that into a game situation.

“Since the youngsters first came into the building, all we have been working on is playing out from the back and reactive pressure, so they start to understand the Terriers Identity,” said Town’s Academy Manager.

“We wanted to give them an idea and see how they implemented that into a match situation, so we could see if they’ve picked up what we’ve shown them.

“It was good to see the players that had picked it up and their understanding of our style. We will be able to take a lot of information back to PPG Canalside and review it with the lads, so they know how they can develop further.

“But, when we look at Terriers Identity in isolation, you can see how well they’ve come on in those areas. We’ve got more time throughout the year, so they can pick up more tactical details and more understanding of how we play.”

➡️ Some early passing drills for the Under-17s today, mimicking some of the passages of play that will happen in games#YoungTerriers #htafc (DTS) pic.twitter.com/CRtSBi5TmN

Despite only meeting each other and learning a new style of play three weeks ago, Bromby was impressed with what he saw from the young side.

“The feedback from the games, especially from the first 30 to 40 minutes against Newcastle, was excellent and we were by far the better team.

“With the ball we were making more passes than anyone else and looked exciting in possession but what we are lacking with at the minute is the game understanding.

“We have to remember these lads have only been in the building three weeks and the players at the other sides have been in there for a lot longer; that’s the difference. Our lads have to have the understanding of positional play and game management; they will learn that overtime.

“What I will say, is individually we look like we’ve got some very good and exciting players.”

Not only was it important to see how the Young Terriers implemented their new style of play, it was also vital to help them bond as a group.

The Under-17s barely new each other before coming to PPG Canalside at the start of the month and the way they’ve gelled together has particularly impressed Town’s Academy Manager.

“Socially it was a big eye opener, especially for the staff, seeing a group that has come from all over the country mixing together.

“We had a swimming pool session yesterday for recovery and the way they have bonded has been a big plus from the trip.

“They’ve come together really well, and the tournament has been a success for us.”