- Town’s U19s in action on Monday evening
- Hudson’s side face the Evo-Stik East side Ossett United
- Kick-off 7.30pm at the Ingfield Stadium

The game kicks off at 7.30pm and pits the Young Terriers up against the side placed 10th in the Evo-Stik East Division.

Supporters will be able to attend the game in Ossett with admission priced as follows:

Monday’s game is the latest instalment of the bespoke games programme set out for the Young Terriers, whose last scheduled game against Gainsborough Trinity on Tuesday 27 November was postponed due to a waterlogged pitch.

Town’s last game at this age came against Norwegian side Drammen FK ending in a 3-1 defeat for the Young Terriers at PPG Canalside.

This will be the second game in three days for Town’s Academy, with the John Smith’s Stadium playing host to Peterborough Utd on Wednesday 4 November 2018 in the FA Youth Cup. It will be FREE entry for all supporters attending that game (Under-14s must be accompanied by an Adult). 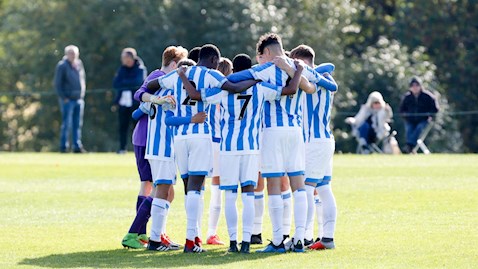