Young Terrier George Alifieri is thoroughly enjoying his time at Huddersfield Town and believes he is becoming a better player because of it.

The right-back joined the Young Terriers at the beginning of the season and described how training at Huddersfield Town is very different to his previous club Barnet.

“I’m loving my time here, coming in playing football every day and trying to be better.

“In this environment we have an opportunity to work and improve our individual skills, technical skills on the grass, tactically in the classroom and in the gym.

“The environment here is elite and everyone has high standards. For me that’s perfect because I always try and hold myself at high standards in everything I do.”

Since walking through the door at the beginning of July, George and his new teammates, have been learning about the Terriers Identity and trying to adapt to a new style of play.

The defender went in to detail about how he’s found the transition.

“I found it challenging at first because it’s very different to what I’ve been used to, but as weeks have gone on I’ve started to adapt to it and get used to it.

“It helps a lot focusing on one thing for six weeks at a time because you’re just looking at one area; that helps you completely understand the system a lot more.

“In games I’m constantly recognising what’s happening and where I need to be all the time; it’s starting to get easier now.

“It’s making me a better footballer as well because it’s opening my understanding as a player. The more understanding you have on different aspects of the game the better player you will be.”

George admitted that he didn’t find it easy to adapt to the new style of play but explained how the approachability of the coaches at the Club have helped him.

“All the coaches are free for you to ask questions, if you don’t understand anything, which I have done because at first I didn’t quite get it (the Terriers Identity).

“I was able to ask Brombs (Leigh Bromby) or Hudds (Mark Hudson) what I needed to do, where I needed to be, and they’ve helped me with it. You can’t ask for anyone better than them to ask for help.” 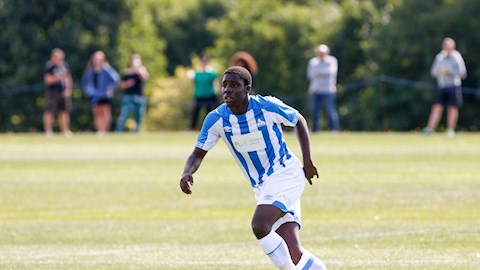 “I find that we try to apply everything we’ve done in training into the games.

“It has been difficult with some results, but it’s paying off because we are recognising how we are developing in matches and how what we’ve been doing in training helps us - results will come.”

Not only has George been playing for Town’s Under-17s, he also went away with Mark Hudson’s Under-19s during pre-season.

“I was buzzing,” admitted George. “The minute I came in here and I found out the Under-19s were going on tour that was my goal, to try and get picked to go on that tour. The experience was amazing, it was the best time of my life.

“I was first in every day and last out, working on my weaknesses and strengths, trying to better myself.

“Since I’ve been on that tour, I’ve maintained what I was doing to try and get picked to ensure I stay at this level. I try to better myself every game.”

Town’s Under-17s face Notts County in the U18 Youth Alliance league at PPG Canalside this weekend. Town fans can attend the match and watch the Young Terriers for free; the game kicks-off at 11.30am.