Who is your HTAFC Premier League Player of the Year?

Voting is now open for the Hargreaves Memorial Huddersfield Town 2017/18 Player of the Year!

The Club has joined forces with the Huddersfield Examiner to set up a vote, which is open now and will run until 9am on Tuesday 24 April 2018, so you can decide which player is the most deserving this season.

Australian international Aaron Mooy is the current holder of the award (below), gaining 30% of the vote from supporters at the conclusion of the 2016/17 campaign. 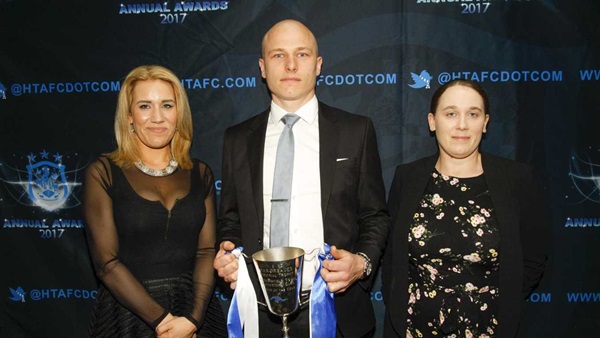 In Town’s first ever Premier League season, there are a number of worthy candidates for this year's Hargreaves Memorial trophy, named after Town supporters John and Edith Hargreaves and sponsored by Thornton + Ross.

Last year's winner Aaron Mooy has continued to impress having made the move from Manchester City permanent in the summer.

The same can be said of the Australian's midfield partner Jonathan Hogg who picked up the Players' Player of the Year award for 2016/17.

At the back, Jonas Lossl's performances have helped him secure a permanent move to the Club with Mathias Zanka slotting in perfectly alongside the ever-impressive and dependable Christopher Schindler.

At the other end of the pitch, record signing Steve Mounié’s goals have been crucial at key stages of the campaign as have Laurent Depoitre's – both men's displays being rewarded with terrace chants for the endeavours.

Alex Pritchard has been a revelation since signing from Norwich City in January, while Collin Quaner has contributed with the most assists this term.

But it is up to YOU to decide on the overall winner with the Huddersfield Town joining forces with the Examiner to let you make the selection for the season's best player.