The Everton copy of The Terrier is just £3.50

- The Terrier is available at the JSS Stadium and at the PPG Canalside Fanzone
- Includes an exclusive interview with Aaron Mooy
- Special tributes to Huddersfield, Everton & England great, Ray Wilson

You can read a number of exclusive features on Ray Wilson in Huddersfield Town’s official match day programme, The Terrier, ahead of the Club’s home match against Everton.

You can purchase a copy of the programme, which is printed by Ignition, from around the John Smith’s Stadium, the Stadium Superstore and from the PPG Canalside Perrys Fanzone.

Mooy discusses the chance of becoming the first Town player since Ray Wilson in 1962 to feature in a World Cup. This is particularly apt in the programme as it celebrates all Ray Wilson achieved with both clubs playing here today, and with England. 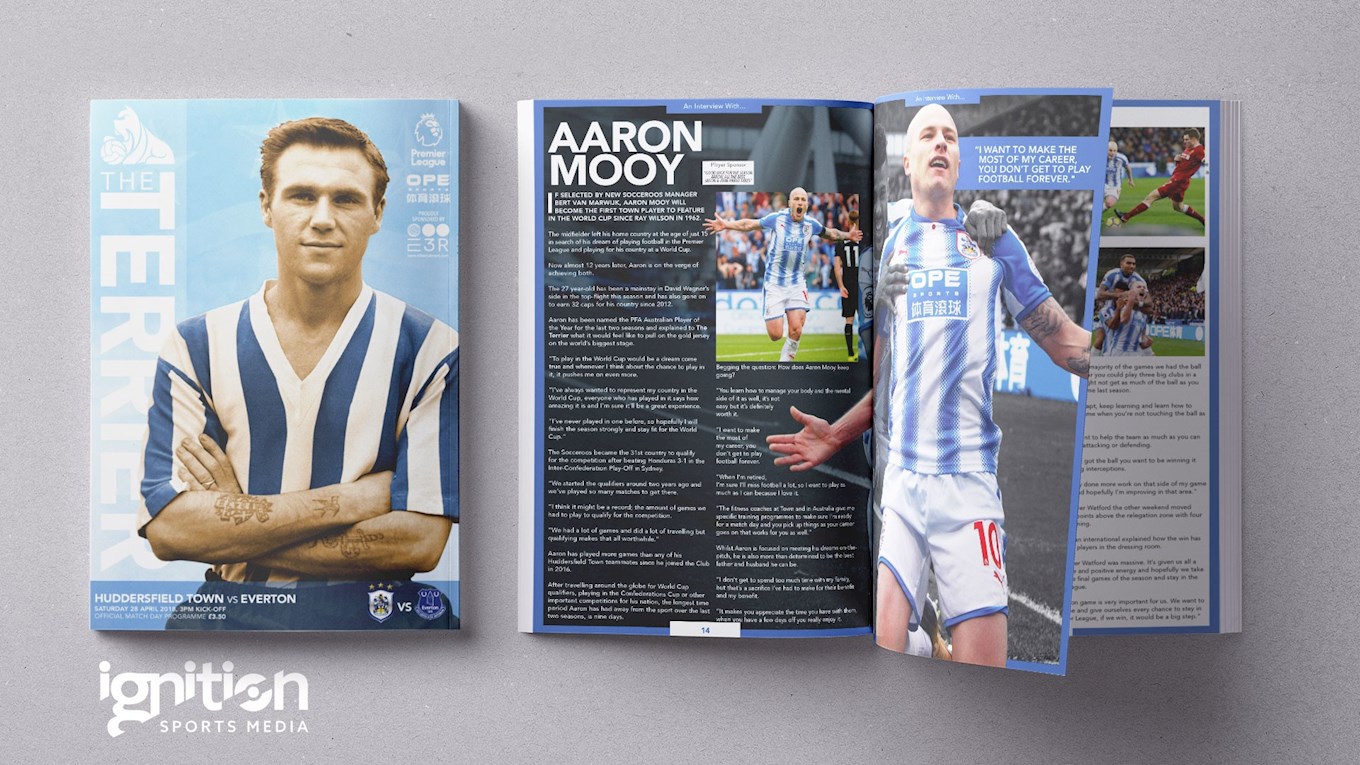 Both Head Coach David Wagner and Chairman Dean Hoyle issue rallying calls to the fans who provided such an incredible atmosphere after Tom Ince’s Watford winner two weekends ago. Whilst, Tommy Smith explains that the players can’t take their foot off the gas as they enter the last four games of the Premier League season.

News at Town includes a heart-warming mention of 86 year-old Turnstile Supervisor Ducan Haigh who has given 72 years of his life to working on the Huddersfield Town turnstiles. Haigh has seen Town play in all four divisions, at two different stadiums and observed seven promotions so far. Andy Booth recognised him with a special `H’ pin badge to recognise his efforts as he plans to retire after the Arsenal game at the end of this season.

Doug Thompson provides an outside view on Ray Wilson’s 1964 replacement at left-back, Mick Meagan. Before Wilson has a double-page spread designated to himself-indisputably Town’s greatest ever full-back. There is also a tribute to Huddersfield’s World Cup heroes; Bill McGarry and Ron Staniforth the other two, who both played in Switzerland in 1954.

Everton is welcomed in usual style with 10 pages, including everything from a feature on Manager Sam Allardyce to the Club’s key players to watch.

Rekeil Pyke and Ben Mills are this week’s Academy player interviews, as the U23 and U18 seasons draw to a close.

Make sure you pick up the special Ray Wilson edition of The Terrier! 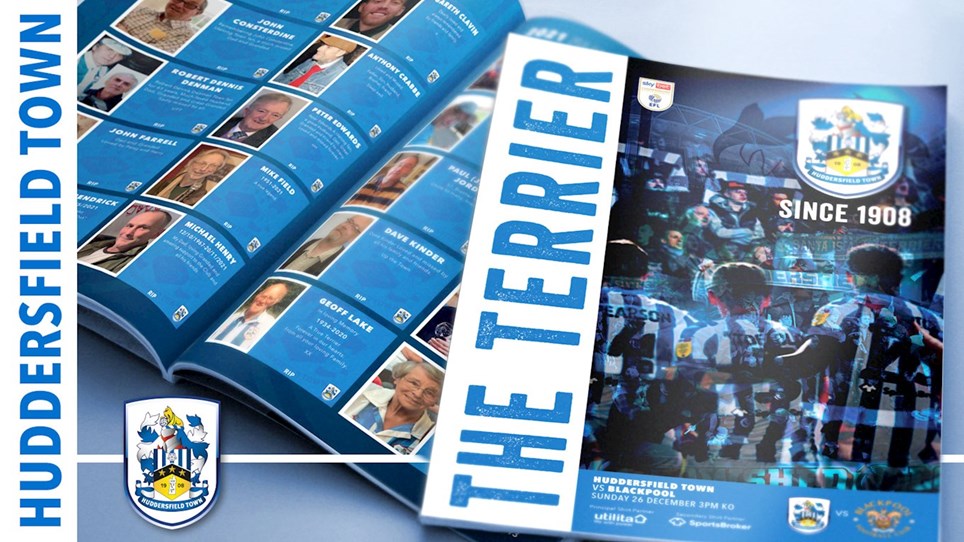 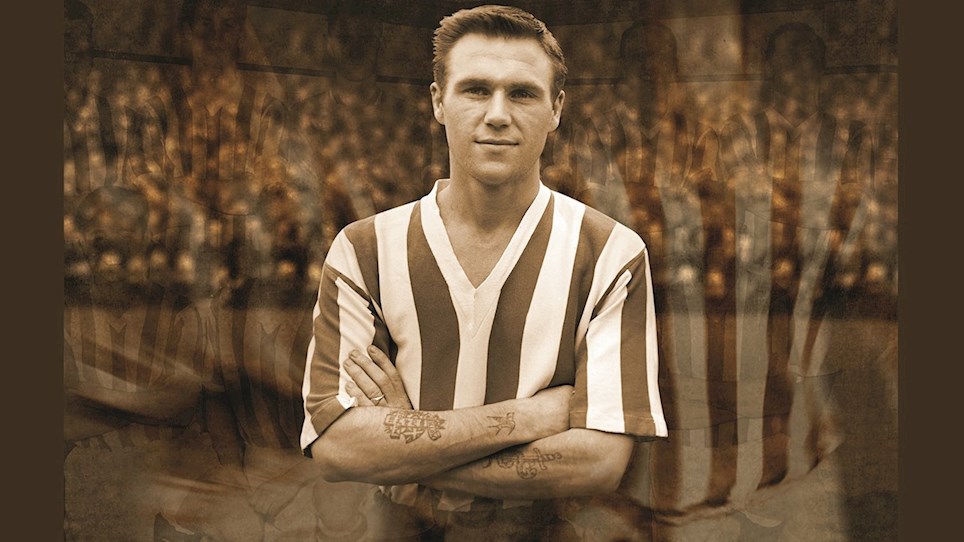 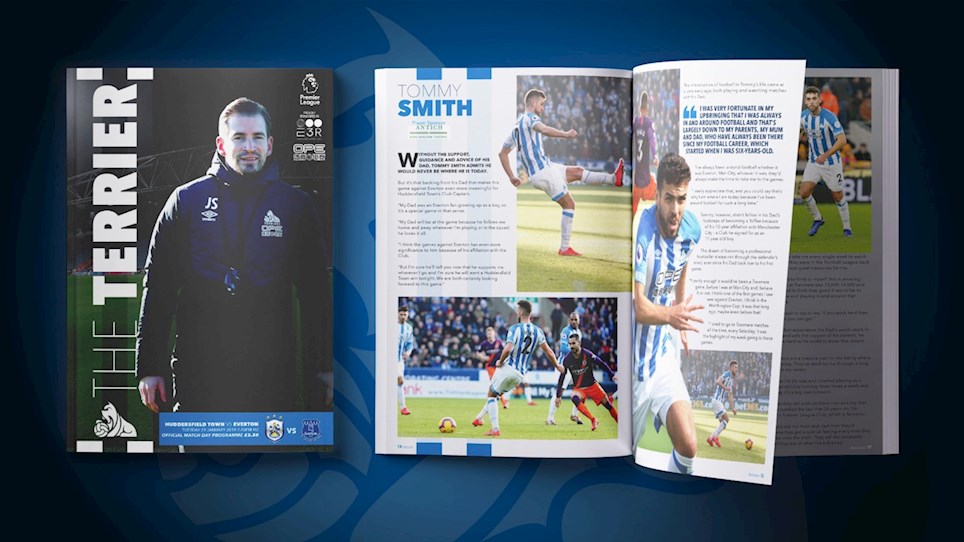 GRAB A COPY OF THE TERRIER VS EVERTON