After finishing second in Group 1 playing against the likes of Borussia Mönchengladbach, Town’s U19s competed in a Semi-Final and Third Place Play-Off before finishing fourth at the prestigious tournament in Düsseldorf.

The tournament, which took place over three days, was a good opportunity to test Town’s Academy against some of the best sides in both Europe and the world, subjecting the young players to a number of different challenges.

“It was a good experience for us all. It was hard to know what to expect but the level our players performed at wasn’t a surprise to us, without being over confident,” said Mark.

“You expect clubs like Salzburg or Werder Bremen to be very good, but some were unknown like the Japanese Select side.

“The tournament had a good mixture of ages, styles, physique. The Japanese XI were small and technical for example, and it was good to play against lots of different styles.

“What we tried to do was give the team a plan before each game but not overload them with information.

“We watched the games between ours so there was a lot going on and it was very intense to give the players an idea of what they were likely to face.”

The competitive nature of the tournament was something very different to Town’s youngsters.

Hudson believes this intensity will have the biggest impact on the Young Terriers in what he defined as an “invaluable experience”.

“Unless you’re playing in a First Team environment it’s a struggle to create that level of intensity.

“Because there was such a short period of time between matches, there’s highs and lows really quickly, so they had to adapt to that, absorb results and then react to them quickly; it’s difficult to re-create that.”

Town took 19 Academy players to Germany for the matches which took place in quick succession.

Hudson believed the rotation policy he deployed in the tournament also helped the players develop mentally.

“We used everyone while we were out there, and I think it was important for the players not to take things personally and think it was more about them as a team and as a group.

“The whole set-up was great to help me, as a coach, and the rest of the staff learn but for the players it was invaluable.

“They may not learn from it straight away but in a month’s time, when they look back at the tournament, they will know they learned a lot that weekend, which is great for their development.

“I believe the players will have learnt miles more during that weekend than what they would’ve done in a month’s worth of football.” 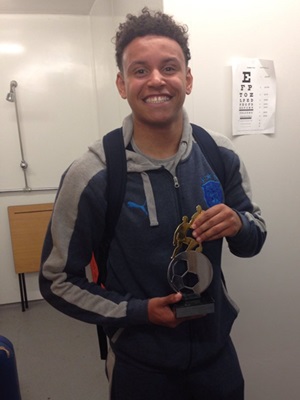 Another positive from the U19 Champions Trophy was the Young Terriers’ Captain Rarmani Edmonds-Green (left) being named as a Defensive Player of the Tournament.

The young centre-back started five of Town’s six games in the tournament, with the young side only conceding four goals in those matches.

Mark Hudson hailed the youngster’s performances, whilst explaining how the tournament was a great way for himself and the other coaches to see how Huddersfield Town compares to other sides in Europe.

“He (Rarmani Edmonds-Green) was outstanding, but he wasn’t the only player; there was a lot of good performances out there and as a team, they stuck together.

“Rarmani obviously stood out and it wasn’t just us that were praising him; he was given that award by the people from the tournament.

“It’s testament to him; he was great in every game he played in.

“He was Captain, led the team and kept everyone calm in moments when we needed it. It was a good learning curve for him, which was great, and it’s put him on a high.

“Now we are back home, we hope he can maintain that form from now until the end of the season.

“It’s brilliant for the Club and the Academy to have a stand-out player in a tournament with 10 good teams and it could’ve been more. We had some really good performances.

The match was limited to few chances in what was a close-fought game in Düsseldorf. Town had two penalty appeals as both Jordan Williams and Micah Obiero went down in the area, however, the referee waved away both protests.

Watch highlights of the match below!

US SASSUOLO 1-2 HUDDERSFIELD TOWN U19

Despite starting brightly, it was the hosts who took the lead. A ball over the top of Town’s defence found Cristian Tzvetkov who buried his shot low into the bottom right hand corner of the goal in the 25th minute. Substitute Olly Dyson levelled the scores in the second half, getting in front of a defender to divert left-back Mason O'Malley's cross past the goalkeeper. In the final minute of the match some smart work from Matty Daly and Micah Obiero gave the Young Terriers a chance from the penalty spot. Obiero received a great pass from Daly before being tugged down by a defender. The referee showed no hesitation in pointing towards the spot and Daly stepped up to finish.

Watch both of Town’s goals and more below!

Town got its reward for a positive first half just before half-time. Matty Daly arrived to meet an excellent low cross and finishing into the empty net. The Young Terriers started the second half in a similar dominant manner. Olly Dyson cut in well from the left flank and hit a driven effort towards goal. The ‘keeper got down low to save but Matty Daly was in the right place to strike a shot towards goal. The ball looped up over the grounded goalkeeper and tapped the post on its way in.

Watch highlights of the win below!

Town entered its final group game with qualification into the Semi-Finals already confirmed. The best chance of the game fell to Dahomey Raymond from the penalty spot after the referee blew for a foul following a Ben Jackson corner. However, the ‘keeper guessed the right way to keep out the midfielder’s low effort.

Watch highlights of the game below!

In the sixth minute, a corner was floated to the back post where Ryo Tabei was waiting. His header bounced off the turf and over ‘keeper Luke Mewitt into the back of the net. In the 17th minute, Japan Highschool doubled its advantage. A drilled cross from the left flank was converted by Shunta Araki. Town’s second half performance was a lot better as the youngsters pressed back the Japanese side. With four minutes left, Olly Dyson pulled a goal back, firing the ball into the bottom corner from inside the area. However, despite the youngsters’ efforts the match finished 2-1.

Watch highlights from the Semi-Final below!

In the 21st minute, Werder Bremen took the lead. A corner kick eventually found its way to Joshua Sargent who finished past Mewitt into the left side of the goal. Olly Dyson had Town’s best opportunity for an equaliser. The young striker created room in the area, but his fierce effort was well saved by the ‘keeper.

Watch highlights from the Third Place Play-Off below!