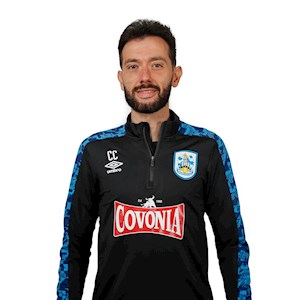 Carlos joined the Terriers from fellow West Yorkshire side Leeds United, where he was Assistant Coach to Marcelo Bielsa as the Whites achieved promotion to the Premier League.

Corberán arrived at Town with a strong reputation in football. Hailing from Valencia, Spain, he holds a UEFA Pro License and is known for his strength in coaching.

He began his career in the setup at Spanish giants Valencia, taking responsibility for the training methodology in their Academy before quickly progressing to work with the First Team under the likes of Unai Emery and Manuel Pellegrini during the Club’s run to the Europa League semi-finals.

Under the recommendation of Manchester City boss Pep Guardiola, Carlos then travelled overseas to become Assistant Head Coach at Saudi Arabian clubs Al-Ittihad and Al-Nassr, where he gained experiences in the Asian Champions League.

Carlos’ first experiences as a Head Coach followed in Cyprus, where he took charge of Doxa Katokopia and then Ermis Aradippou, who he steered to safety in the division.

Through his work at the prestigious Aspire Academy in Qatar, he then joined Leeds United ahead of the 2017/18 campaign. Initially working as Under-23 Coach, the quality of his work soon saw him move into the First Team setup under Marcelo Bielsa as the Whites finished third and first in the Sky Bet Championship.

CARLOS: WE NEED TO REACT


Town Head Coach on loss to the Lilywhites

CARLOS LOOKS AHEAD TO DERBY

CARLOS LOOKS AHEAD TO ROTHERHAM CLASH