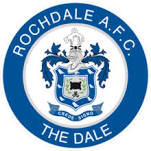 Huddersfield Town’s B Team beat Rochdale 3-1 at Canalside on a very wet afternoon in West Yorkshire.

Alex Pritchard opened the scoring after 33 minutes, with second-half strikes coming from Jaheim Headley and Kit Elliott to give Town a firm lead before the Dale netted a consolation at the death.

The home side started well, having the game’s opening opportunity after three minutes. Town's trialist striker outmuscled his marker to latch onto a Matty Daly through-ball, however, he saw his subsequent effort cannon against the post - with Rochdale 'keeper Brad Wade possibly getting a hand to the ball.

On 10 minutes, Town went within millimetres of taking the lead. Sorba Thomas, who took Joel Pereira’s monumental throw forward into his path, drilled the ball across goal and towards Pritchard, who slid in but narrowly missed the delivery.

Despite that, Rochdale went close to taking the lead after a quarter of the game, only for Pereira to make two good saves in quick succession to keep the score level.

Town continued to chip away at a sturdy Dale backline, who remained resolute as they defended a pinball in the area to deny the trialist and Matty Daly from a corner.

Striker Elliott replaced the returning Danny Ward on the half-hour in a planned change and was pivotal in Town taking the lead.

The forward bullied his way through the middle before he slipped Pritchard through on goal, who took a touch before he drilled his effort past the goalkeeper.

Pritchard almost doubled his tally on the stroke of the break, forcing the ‘keeper into a great save down to his right from 20 yards out.

The second-half display was professional from the hosts, and what it lacked in opportunities, it made up for in goals and ball retention.

On the hour, left back Headley doubled the Young Terriers’ lead. A well-crafted move ended with Headley beating his man before he slammed an effort through the legs of the ‘keeper from an acute angle.

Daly then went close moments later, taking a Brahima Diarra pass out of his feet before he saw his shot fall the wrong side of the post.

Town added a third on 73 minutes, through Elliott, who benefitted from Diarra's deft pass and Daly’s hard work – where he rounded the goalkeeper – by rifling home from the midfielder’s cut-back.

Jon Worthington’s side lowered the tempo in the final stages of the game, and allowed Rochdale to net a mere consolation with five minutes to go after an error in possession from Town.

Elliott almost restored their three-goal advantage on the stroke of full time, but the forward could only shoot into the midriff of the ‘keeper, and the game ended 3-1 to the Young Terriers.

As well as the scoreline, it was great to see Tommy Elphick get through his first 90 minutes of action since returning from injury at centre back.