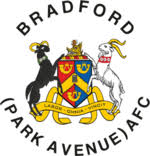 Huddersfield Town’s Under-19 side took learnings from training into Tuesday night’s game with Bradford (Park Avenue), earning a 2-2 draw with the Vanarama National League North side.

Under-19 Coach Dean Whitehead has been working with his Young Terriers to improve the defensive balance when in possession; something they did not get right recently, particularly in Saturday’s 2-0 Tigers Cup Final defeat to Hull City’s Under-23s.

‘Deano’ told htafc.com that the players took the lessons on board at the Horsfall Stadium, where goals from striker Kit Elliott and midfielder Tim Akinola earned a draw against a good Park Avenue side.

“I was happy with them,” Dean said of his players on Wednesday morning.

“When we have had the ball in the attacking or midfield thirds, we were too spread. We’re teaching the defenders how to shuffle across correctly, in the way that the First Team does under Jan Siewert. They did that well against Bradford.”

The players on the pitch on the evening had an average age of under-18, including two trialists aged just 16. In football terms, many players are still new to the professional scene, with seven having been in an Academy setup for a year or less.

Dean continued: “They’ve had a lot to learn in a short period of time, but they are all learning and developing.

“You can see that they are taking the information on board, which is a process that takes time. I was pleased with how they applied our learning from training and competed very well against a team in the sixth tier of English football.”

There are two friendlies still to play next week – against Pontefract Collieries and Hyde United – after which Whitehead will take stock on a superb summer for the Academy.

“It has been a demanding pre-season due to the number of games, which was the point! It helps to build resilience; a big attribute to have in modern football, where you can play 50 games a season,” Dean explained.

“We’ve also had six or seven of our players with the First Team at different stages, which has given us a challenge in terms of numbers. However, I will never complain about that; that’s why we come in every day!

“It’s been a real boost for the staff in the Academy and the players that the Head Coach has taken our players into his training sessions and matches. It has been great to see several of them make a real impact with the First Team.

“After the Hyde game, we will spend more time on the training pitch, learning from what we’ve seen in pre-season.”

*Photo above by Alex Daniel.