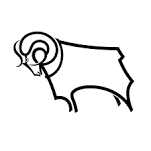 Huddersfield Town’s Under-19s battled out a hard-fought draw against a Derby County Academy side on Wednesday afternoon.

Town hit the ground running through Kit Elliott who rounded the keeper and took a touch too many that allowed Derby's defenders back to clear before he could get his shot away.

The rest bite was short lived as Jaden Brown picked up the ball and burst into the box before being brought down. Brown got up and calmly dispatched his effort low to the keepers left to give Town the goal advantage.

After a red-hot start, the game cooled to a reasonable temperature as both teams saw good periods of possession with the ball. However, Town’s game plan changed slightly after Oran Thompson went down through injury in the 15th minute and was replaced by Romoney Crichlow-Noble.

It was the substitute who came up with the next of Town’s chances, popping up at the far post following a well worked corner and glancing a header towards goal. The Derby defenced released a sigh of relief as the effort clattered off the post and out of play, denying Crichlow-Noble a goal as an impact substitute.

It was again Crichlow-Noble who had the last of the major chances in the first half, as Scott High drilled a cross in from the right-hand side. Back-peddling, Crichlow-Noble wasn’t able to get enough power on it as he aimed to knock it towards goal, and the Derby keeper collected easily.

Town’s only change at half time saw Matty Daly replaced by Alex Wollerton, part of planned rotation in the side.

The second half began very much as the first concluded with both sides enjoying prolonged periods of possession, without any real threat to the opposition. However, a strong clearance was needed by the Town defence, as second half substitute Greco pulsed down the right side before whipping a dangerous ball in, however, the Young Terriers rose well to clear.

On the stroke of the hour, Town managed to make carve out another opportunity. Brown turned from goal scorer to assister, as he whipped a brilliant corner towards Crichlow-Noble. The defender cushioned the ball with his chest, before holding off a barrage of Derby defenders, and hitting a strike on the turn towards the bottom right. Through a sea of legs, the effort darted past the keeper and nestled in the goal to make it 2-0.

Derby looked to respond quickly, and almost did, as substitute Splatt linked up with Greco before hitting an effort hard and low from the edge of the area towards the bottom left. However, Chapman reacted well to make the save, after taking a small nick off a Town defender.

Only moments later, Town’s defence was again hard at work, as the ball was swung in from the left-hand side. Floating dangerously towards the 6-yard area, Brown had to get contact on the cross to stop the man behind him tapping it home, and while facing the goal, Brown managed to compose himself and clip the ball over the bar to safety.

Despite Town’s best efforts, a goal finally came for the home side in the 75th minute as a corner was whipped in towards Derby’s Rashid who darted forward before glancing a superbly placed header into the far left corner leaving Chapman with no chance.

Derby began to put the pressure on, and in the 82nd minute drew the game level. Surging forward, the Derby team looked set to score after the ball broke for them; however, the Town defence organised well and successfully blocked a strike before the ball deflected kindly for the home side as Dixon made it 2-2.

With just two minutes remaining, Scott High almost had the final say, as he picked the ball up in the centre of the park and lashed a fantastic effort on goal. Hit with some speed, the strike had the Derby keeper scrambling to make before hitting the crossbar before glancing out for a goal kick.

The next challenge for this U19 side will be as part of a tournament on the 23rd March where they will play both FC Tokyo and Newcastle United.