Huddersfield Town’s Under-19 players will face an array of different challenges over the next fortnight thanks to the Club’s unique games programme.

First up for Dean Whitehead’s Young Terriers is a return trip to face a Harrogate Town side expected to include senior players on Tuesday in a 11.30am kick-off at the Vanarama National League club’s CNG Stadium.

The Under-19s have already played Harrogate this season, losing 3-1 despite a good performance back in October, and Whitehead is looking for improvement from the youngsters as they look to cope with the physical edge of men’s football.

“Our games programme is great in that it gives our players different challenges. You get the technical challenge against top-tier Academies, but also tests like this one against a very good senior Harrogate side.

“We have struggled against these sides, because this will be the first time that our players face, for instance, a typical ‘British’ number nine. These opponents don’t come up in a usual Academy games’ programme. These boys get the ball forward and they fight hard.

“We’re going back there for the second time this season and we will see if the lads understand what we’ve told them in how you compete and overcome that challenge.”

The squad will then head to Spain for a pair of games against Under-19 sides from mainland Europe next week.

“I’m sure this will be a first trip away for several of our younger players and it’s a real learning experience,” Dean continued.

“You have to get used to the travel and representing the Club in a proper way, we well as playing in a different country against players who will be technically very good. There really is a focus on taking the good behaviours we have instilled in them throughout the season into these trips though.”

“As for the older players who have already experienced trips like this, it is a good gauge to see what they have learned throughout the year.” 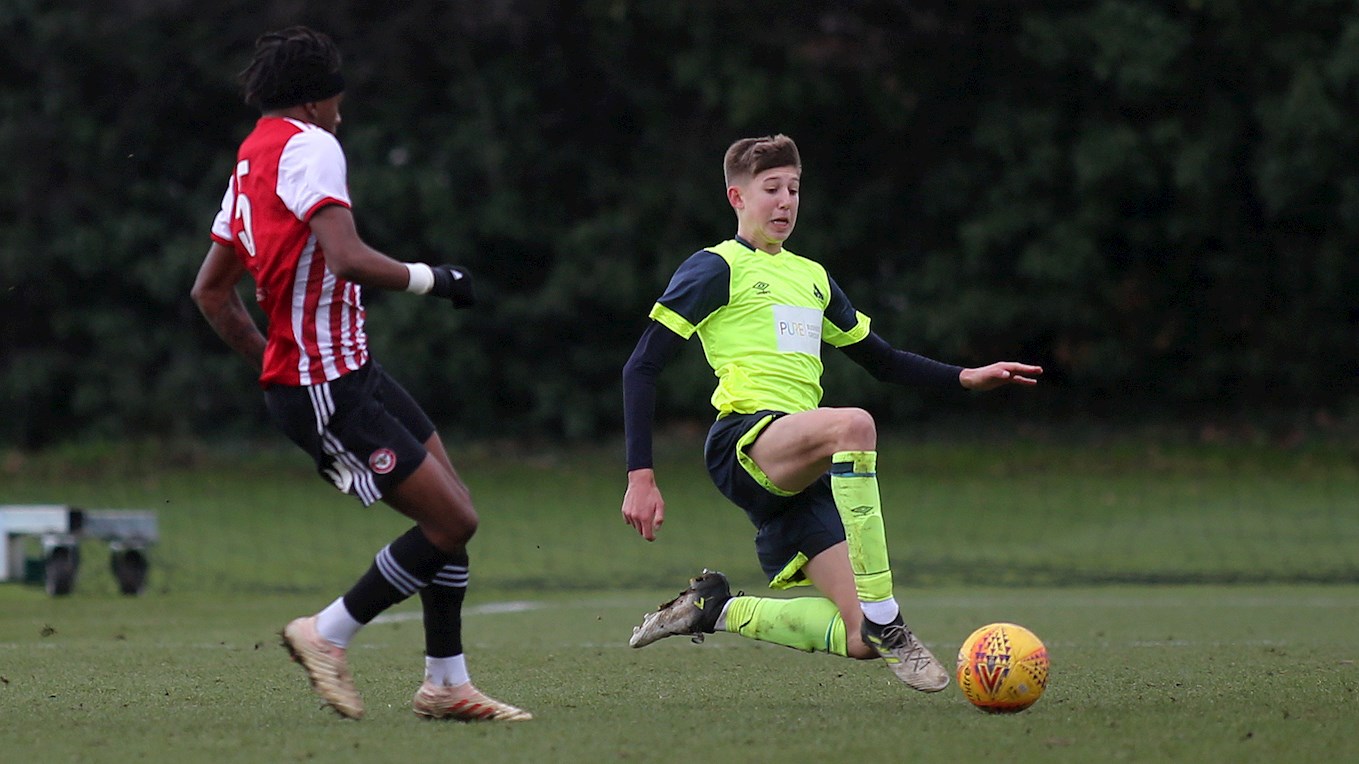 A pair of Town’s Under-17 players – Josh Austerfield (pictured above) and Kian Harratt – will train and play with the Under-19 group for the rest of the season, as Dean explained.

“Those two players deserve the chance. They’ve done everything properly off the pitch, working hard in the gym, and our staff believe they are ready to step up and challenge themselves.

“It is a real challenge, too. Josh has started the last two Under-19 games, with Kian starting the last one, and this is the next step in their development. They must try and impact games at an older level and they will feel the benefit of being around older, better players.”

There was the latest Academy game of the season on Saturday, with Town’s Under-17 side showing more glimpses of what is to come despite a defeat against an older Chesterfield side in the Youth Alliance League.

Young Terriers side impresses in defeat to senior opposition

A young Huddersfield Town Under-19 side will have learned a lot from a game against a good senior side in Vanarama National League promotion hopefuls Harrogate Town in the latest game of the season on Tuesday morning.

Led by Dean Whitehead, the Terriers’ starting XI was one of the youngest of the Under-19 season, with 16-year-old Kian Harratt starting up front and four 17-year-olds playing in Ben Jackson, Scott High, Josh Austerfield and Jaheim Headley.

The physicality of the home side was a real challenge for the Young Terriers in the opening 45 minutes; one they will have learned a lot from.

Trialist goalkeeper Jacob Chapman – an 18-year-old Australian – performed very well to keep the score level in the early stages. He made four saves in the first 20 minutes, all routine apart from the first; an impressive stop to prevent Harrogate taking the lead after a direct counter-attack.

Chapman’s most impressive stops came on the 25-minute mark. After turning a 20-yard free-kick over the crossbar, the stop from the resulting corner was even more impressive; he pushed away a powerful header thanks to top class reactions.

The first real Town chance of note came on the stroke of the half-hour. Midfielder High played a great ball down the left channel for full back Ben Jackson to run onto and his cross into the box was of real quality, but sadly nobody could get on the end of the ball.

This was Town’s best period to date and they soon capitalised by scoring the game’s first goal in the 32nd minute. Right back Demeaco Duhaney was the creator and deserved most of the credit, embarking on a superb run from defence and carrying the ball to the edge of the Harrogate penalty area. His eventual shot was heading wide, but striker Harratt was in the right place at the right time and guided the ball past the goalkeeper.

That was Harratt’s 24th goal for Town so far this season for all age groups; a remarkable return from the former Barnsley man.

Unfortunately for Whitehead, the home side netted an equaliser before half-time; a lob over Chapman despite what looked like a foul in the build-up.

Harrogate Town finished the half strongly, forcing Chapman into another smart save before having another goal ruled out for a clear push on Crichlow-Noble in the move.

Whitehead’s side started the second-half well, taking the game to the hosts. Some excellent play from winger Aaron Rowe soon setup Micah Obiero with a shooting chance, although his effort lacked the power to trouble the goalkeeper, before centre back Rarmani Edmonds-Green flicked a corner across the face of goal with his head.

Rowe and Obiero combined again with 20 minutes left to set High away, but his pull-back was well gathered by the goalkeeper.

Unfortunately, the home side took the lead from a 72nd minute corner and the Terriers couldn’t find the equaliser, despite some good passages of play. Substitute Sam Sharrock-Peplow – another player from the Under-17 group – flashed a ball across the face of goal and then Jackson, now playing on the wing, pulled a shot just wide after a good pass from Crichlow-Noble.

Young midfielder Austerfield almost set Jackson and then Headley through on goal with excellent passes as the game ended, only for the offside flag and skiddy surface to deny the Terriers.

Highlights of the game will appear on #HTTV later this week.