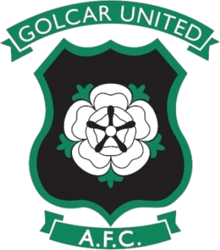 A young Huddersfield Town Under-19 side drew 2-2 with Golcar United at the Skye Direct Stadium in their first pre-season friendly.

Donay O’Brien-Brady put the visitors ahead in the first period before Sonny Whittingham doubled their advantage just after half-time.

However, United came back into the game as they scored a long-distance drive and a freekick to cancel out the Young Terriers’ hard work.

Town were the better of the two sides in possession, but the home side looked the more threatening on the counter.

Golcar had the game’s first opportunity, as they forced Charlie Farrar into a superb save down to his left.

Town’s first majority opportunity came on 20 minutes, as both Jimiel Chikukwa and Charles Ondo saw efforts blocked in the centre, before Shane Maroodza’s delivery back into the middle was cleared.

Moments later, Conor Falls went close as his header from O’Brien-Brady’s cross was saved by the goalkeeper.

On 24 minutes, the Young Terriers took the lead, as Chikukwa broke at pace from a well-defended free-kick before he picked out the smart run of O’Brien-Brady.

The forward slotted the ball through the legs of the ‘keeper, which hit the post before O’Brien-Brady continued his run to roll home into an empty goal.

On the half-hour mark, a poor back pass to Farrar almost led to United’s equaliser; however, Josh Okpolokpo managed to race back and dispossess the forward.

Farrar was then called into action on Golcar’s next attack, as he got down well to parry a drilled effort across the goal.

The hosts ended the half the stronger and should have levelled before the break, but their fluid attack ended with a shot that was dragged wide of the far post.

Town began the second period on top, doubling their lead just two minutes after the restart through Whittingham, who latched onto a through-ball before slotting the ball under the ‘keeper.

However, Golcar reacted well from the kick-off and equalised just minutes later from a distanced effort, which nestled in the bottom-left of Farrar’s goal.

Farrar kept his side in the lead, as he got down to hold a shot from the edge before coming out on top in a one-on-one situation.

Falls almost restored his side’s two-goal lead moments later, but his half-volley was held by the ‘keeper.

On 57 minutes, Sam Nicholson almost made an instant impact from the bench, as he headed into the side-netting from Whittingham’s in-swinging free-kick.

With 20 minutes remaining, United equalised as a well-struck freekick slipped through the legs of Farrar, who tried to hold.

Ondo then went close from a freekick on the edge, which whistled past the goalkeeper’s far post.

As the game, United edged closer to winning the game as a glanced header needed to be nodded behind at the back post by O’Brien-Brady.

The Young Terriers should have gone back ahead in the 85th minute, but an unmarked Chikukwa could only steer Falls’ corner wide of the target.

Despite the draw, a very young Under-19s side will be proud of their performance against a physical side.