- Huddersfield Town vs Wigan Athletic preview
- Game gets under way at 7.45pm
- Get your ticket for the game now!

Both teams will come into this game after having their weekend fixtures posponed due to the sad passing of Her Majesty, The Queen Elizabeth II.

Wigan Athletic won the Sky Bet League One title for a fourth time last season and automatically gained promotion to the Championship, after narrowly avoiding relegation to League Two the previous season.

Managed by Leam Richardson, this is the Latics’ first season back in the Championship since they were relegated at the end of the 2019/20 season.

The defender joined the Latics in the summer before the 2021/22 season after making over 100 appearances for Portsmouth FC. The 26-year-old played a key part in helping the Latics win the 2021/22 Sky Bet league One title and due to this was recognised with a number of individual awards, winning the Club’s Player of the Year award as well as being named in both the EFL and PFA Teams of the Season. The former England U18 International will be looking to reach the same achievements this season. 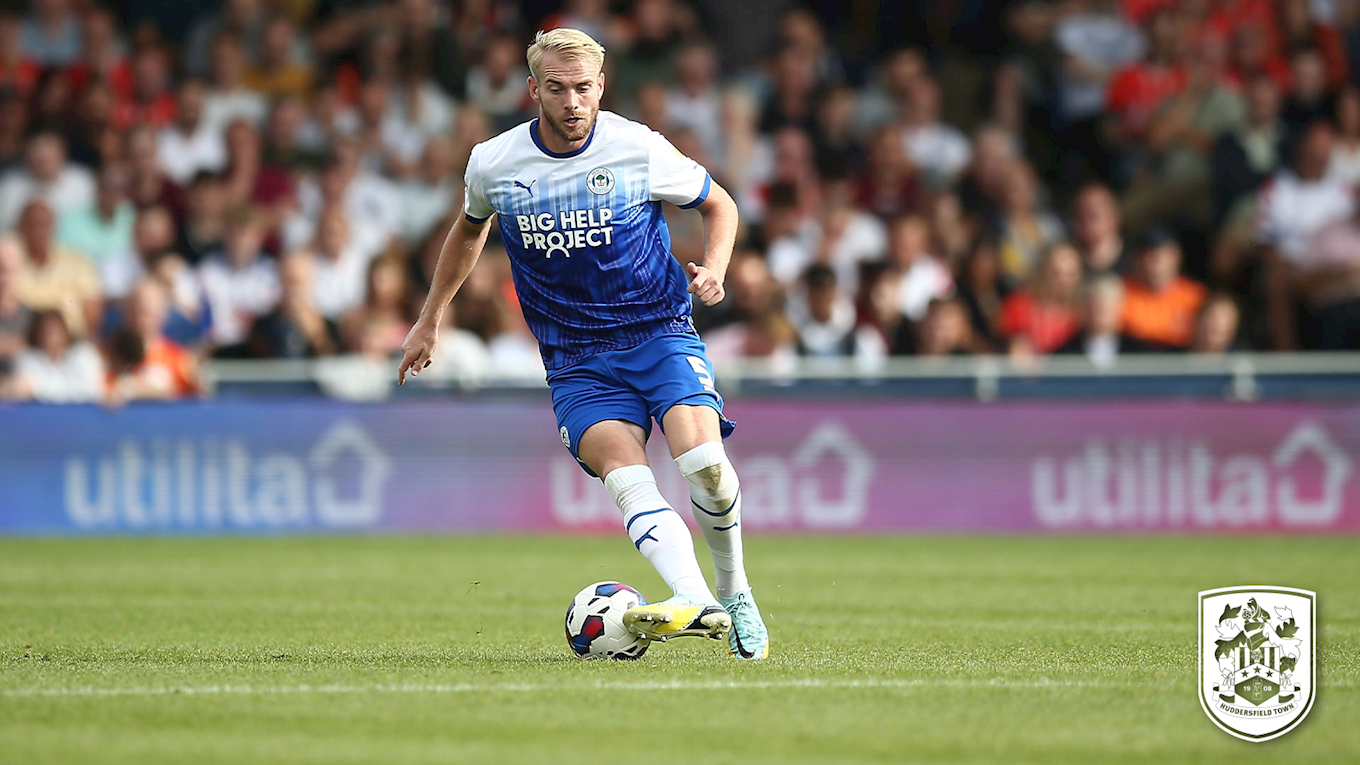 The midfielder returned to the DW Stadium on an initial one-year deal in the summer of 2021, six years since leaving the Latics after catching the eye and transferring to Premier League side West Brom Albion in 2015. McClean spent three seasons with the Baggies before joining Stoke City and after collating over 300 appearances across the top-flight and championship, the 33-year-old brings the experience and quality he has gained back to Wigan Athletic. 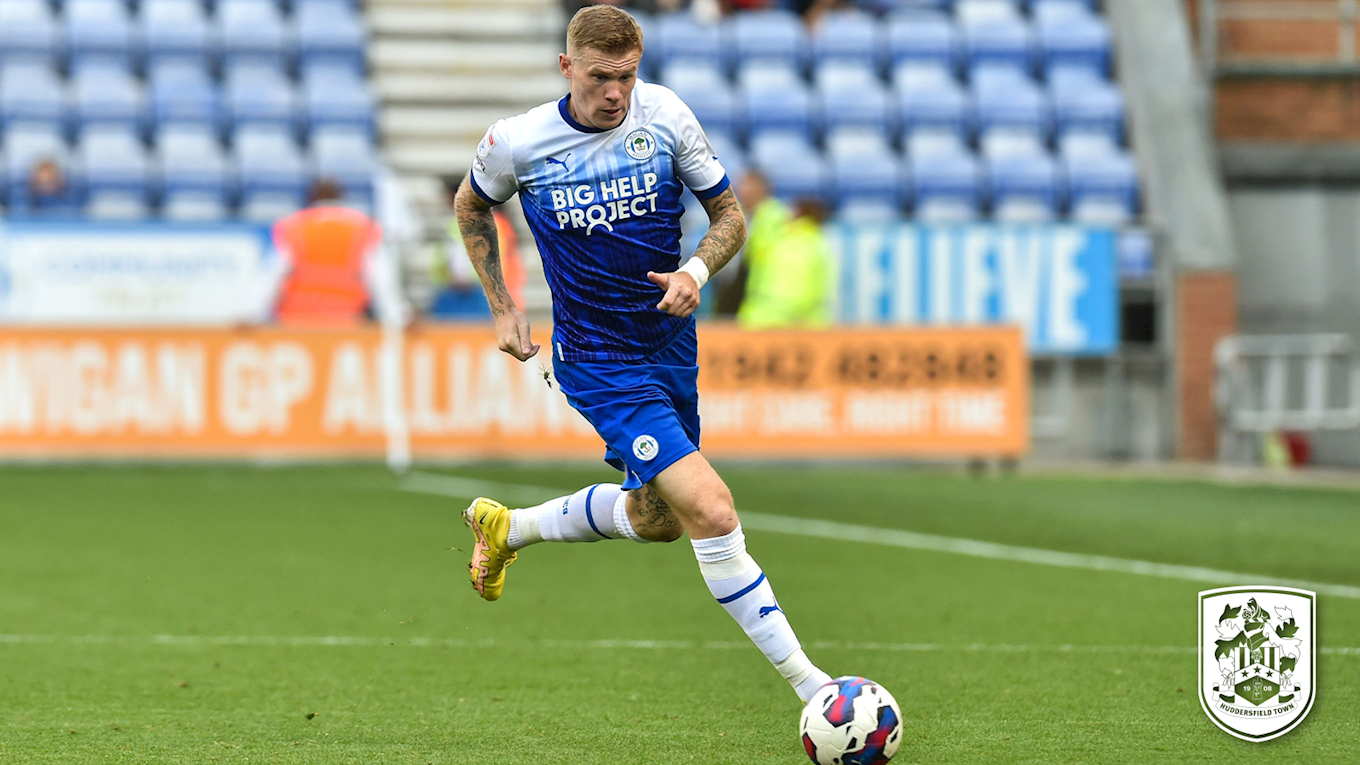 After a brief loan spell with Wigan in 2013, Keane signed permanently for the Latics in 2020 from Ipswich Town. The striker has been the top goal scorer at the DW Stadium for two consecutive seasons and aiming to continue his run into his third season. The Manchester United Academy graduate was key in saving Wigan from relegation into League Two as well as helping them reach promotion last season. Over 80 appearances have been made and 38 goals have been scored in two seasons by the Republic of Ireland International. 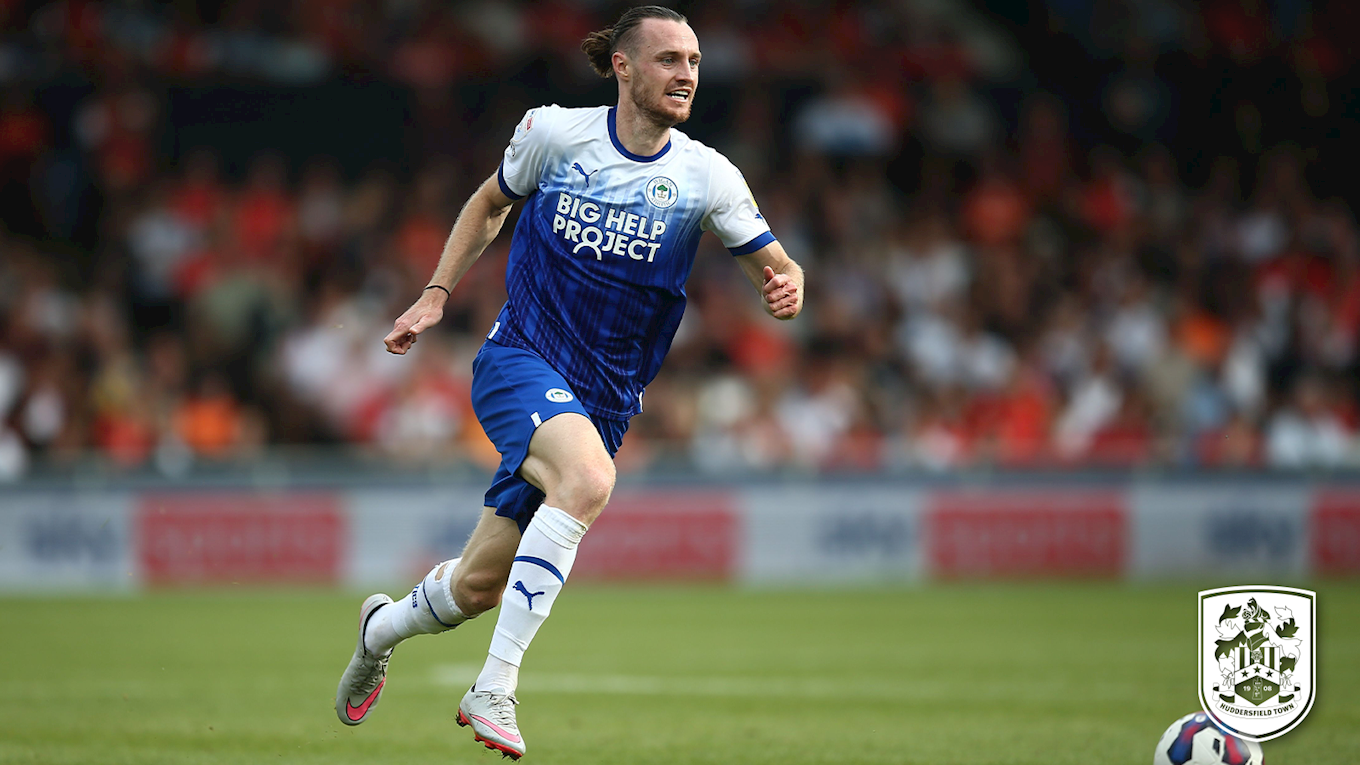 Town Head Coach Danny Schofield will provide the latest on the fitness of his squad in his press conference on Monday 12 September 2022.

Town will be in their famous blue and white stripes for Tuesday’s game. 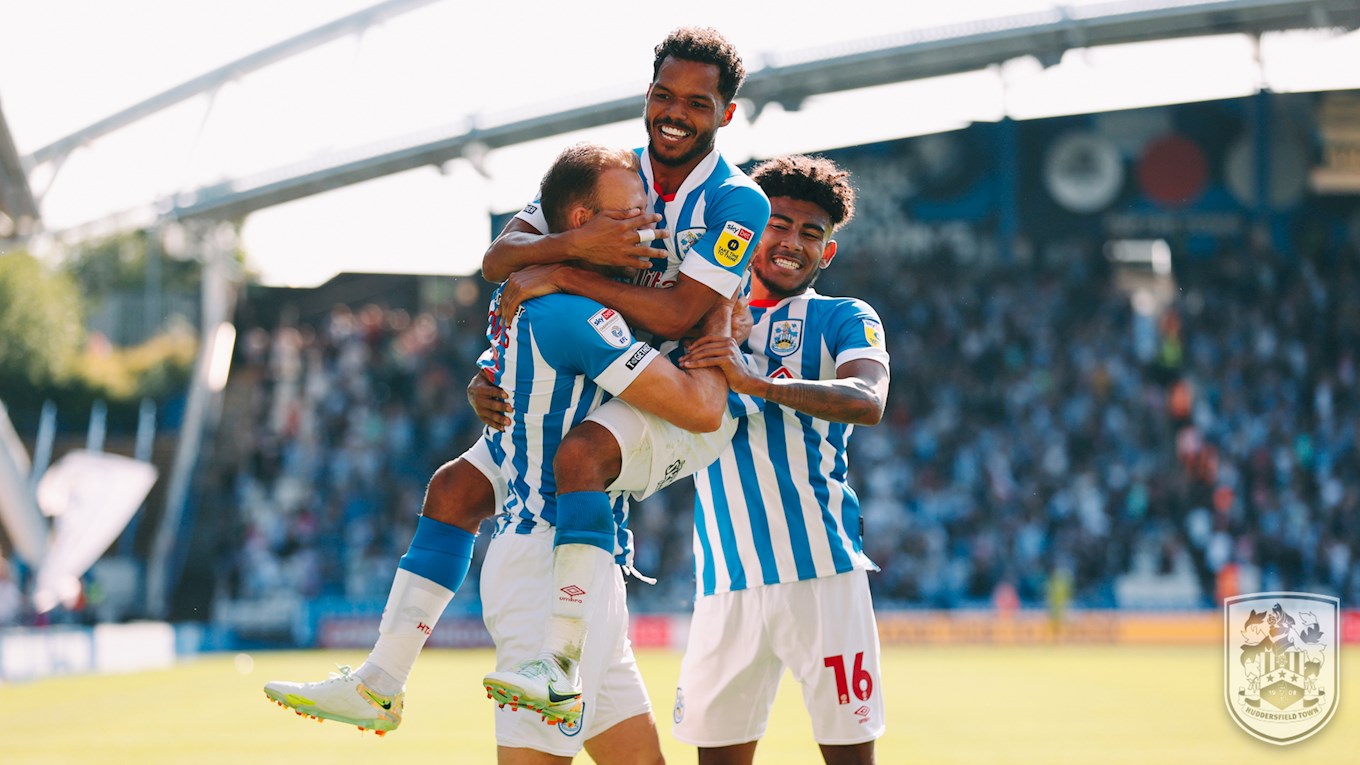 If you are unable to attend the game, you’ll be able to watch and listen along via iFollow HTAFC!

A single match pass for the Terriers game against Wigan Athletic is just £10, and supporters will be able to stream the full 90 minutes of action for that price.

Despite an energetic second half full of chances, the Terriers fell short against Wigan Athletic at the John Smith’s Stadium.

Duane Holmes and Sorba Thomas paired up nicely within the first five minutes after Holmes carried the ball down the pitch and crossed it, trying to find Thomas who's shot was too high and went over the crossbar.

Holmes continued his excellent play as he took the ball down the right side of the pitch and crossed the ball in to Danny Ward; Ward didn't make a clean connection and hit it high and over the crossbar.

This was closely followed by a chance for Wigan Athletic as Will Keane was given the ball on the edge of the box but sent his shot wide.

However, the scoreline didn’t stay goalless as Wigan Athletic were awarded a penalty in the 23rd minute after a foul by Luke Mbete – hit well, the penalty was converted by Keane into the top left corner.

Wigan captain Max Power fancied his chance to double the visitors lead from outside the box but his effort went high and over the bar.

Despite being a goal behind, Town continued to press the away team with Rudoni and Holmes creating chances in order to try and get Town back in the game.

The Terriers tried their chance on the counter, resulting in Rudoni receiving the ball on the edge of the box - but his shot was too high and went well over the bar.

The last action in the first half came from the Latics as Callum Lang’s header from close range landed safely in Nicholls’ gloves, with the Terriers trailing going into the second half.

Town made two changes at the break, introducing Kaine Kesler-Hayden and Pat Jones for Ollie Turton and Sorba Thomas.

Despite that, Wigan had the first chance of the second half after a set piece as Jack Whatmough hit the post with a close range header from a corner and this was closely followed by a free kick for the Latics on the edge of the box, which saw Thelo Aasgaard’s header go wide.

Town started to get back in the game after those close calls and the 61st minute saw a chance for the Terriers when Jack Rudoni shot with his left foot from outside the box, but this was comfortably saved by Jamie Jones in the Wigan net.

Following this chance, Yuta Nakayama has a big opportunity from a Danny Ward cross but his shot was miss-fired over the bar from close range.

Town got themselves on the scoresheet in the 76th minute, with skipper Tom Lees bagging his first goal of the season from the centre of the box following the ball being cleared off the line from a previous attempt, with a Kesler-Hayden cross eventually rolling into Lees' path.

This then kick-started a good period for Town as less than three minutes later substitute Jordan Rhodes hit the woodwork on the underside of the crossbar, which was also closely followed by a shot on target from close range by fellow substitute Pat Jones.

Regardless of these efforts, Wigan Athletic scored their second goal of the evening in the 82nd minute as Lang turned the Town defence and got his shot past Lee Nicholls following a break. 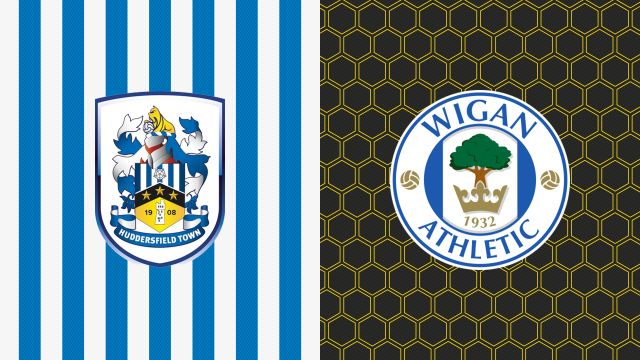 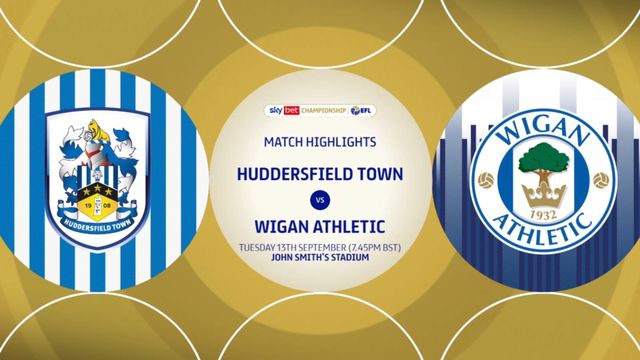 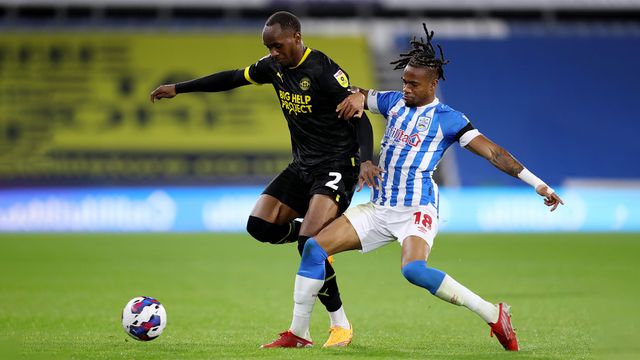