Huddersfield Town are back on the road in the Sky Bet Championship on Saturday 15 October when they travel to face Rotherham United at the New York Stadium; 12.30pm kick-off.

The Terriers go into the game on the back of a 2-0 home win against Hull City on Sunday 9 October in Mark Fotheringham’s first home game as Head Coach.

Rotherham United will be looking to turn things around after their 3-0 away loss to Blackburn Rovers on Saturday afternoon.

Rotherham United were promoted back into the Sky Bet Championship this season after dropping to League One for the 2021/22 season and then winning automatic promotion straight away to get back to the Championship.

Matt Taylor was appointed manager of Rotherham United at the beginning of October following Paul Warne’s departure for Derby County, he will be looking to guide his side to victory and get his first win of the season after they shared the points against Millwall and lost to Blackburn Rovers.

The Millers currently sit 17th in the table after winning one, drawing two and losing two of their last five League games.

The defender joined Rotherham United from Charlton Athletic in 2014 but struggled to make it as a regular in the First Team and went on three short loan spells to Crawley Town, Fleetwood Town, and Chesterfield in 2014 and 2015. Now in his ninth campaign with the Millers, Wood has made over 200 appearances and scored 18 goals – this season alone has seen the 37-year-old score four and assist one in his 11 appearances. Alongside Lee Peltier, Wood oversaw the Wigan Athletic game as co-caretaker after the departure of Paul Warne. 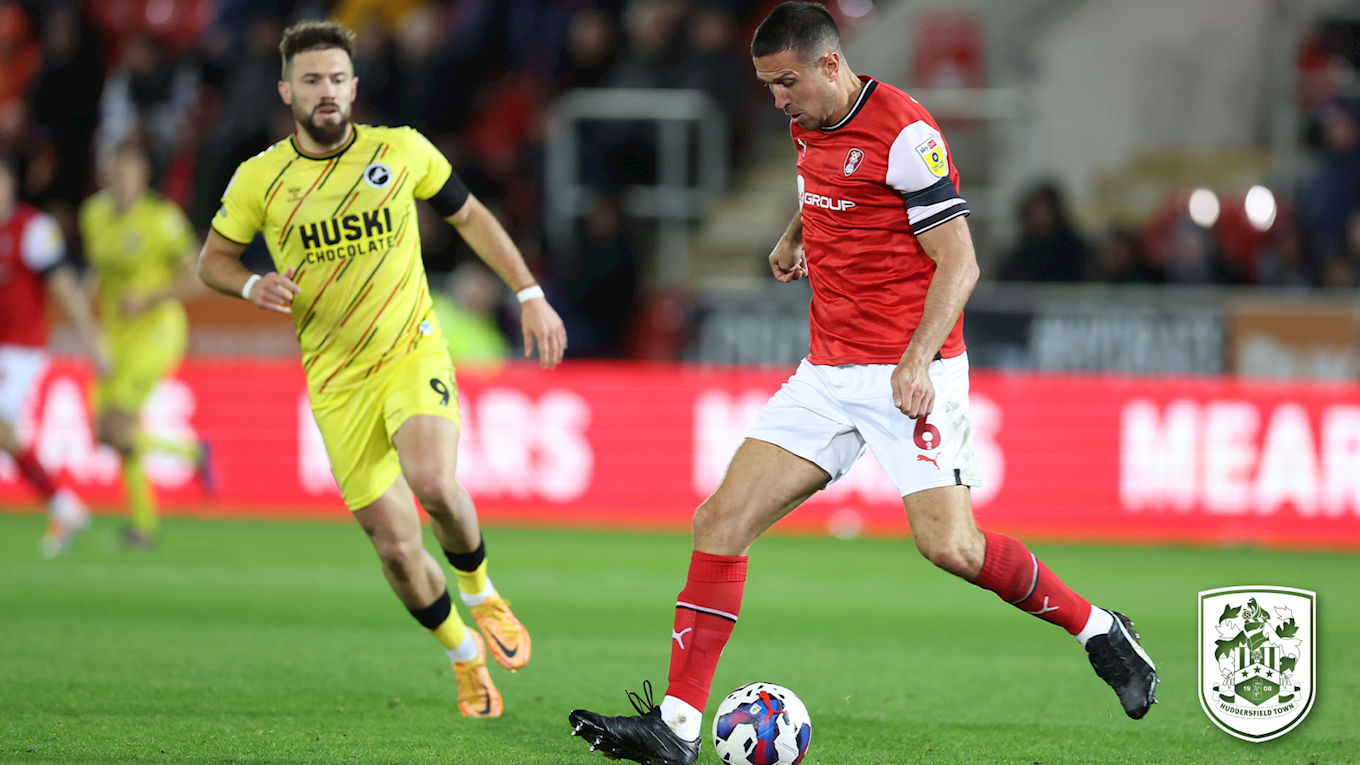 After a successful loan spell with the Millers in the 2019/20 season, the midfielder made the move permanent from Newcastle United in October 2020. During his initial loan, Barlaser impressed with his 35 appearances helping the club win promotion back the Sky Bet Championship. Barlaser did the same last season, helping the Millers secure promotion and win the Papa John’s Trophy saw him named in the Sky Bet League One Team of the Season. The 25-year-old has scored one goals made four assists so far this season. 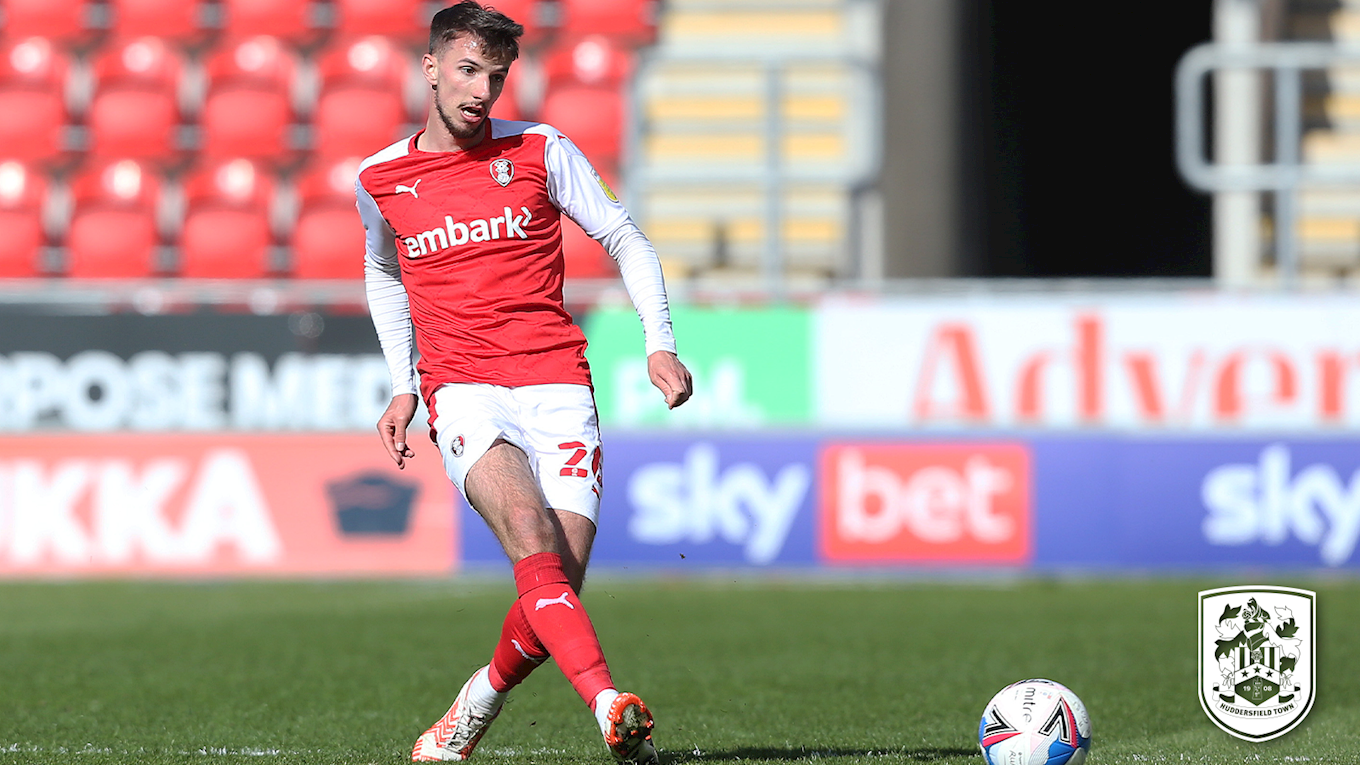 The top goal scorer so far this season for Rotherham United, Ogbene was secured by Paul Warne in the summer of 2019 on a three-year-deal from Brentford. The Republic of Ireland international has made over 90 appearances during his time with the Millers so far, helped them win promotion and the EFL Trophy. In the 12 games he has played this season, he has scored four goals – one from his left foot, one from right foot and two headed goals. He will be looking to add to these goals to make sure he stays as top goal scorer. 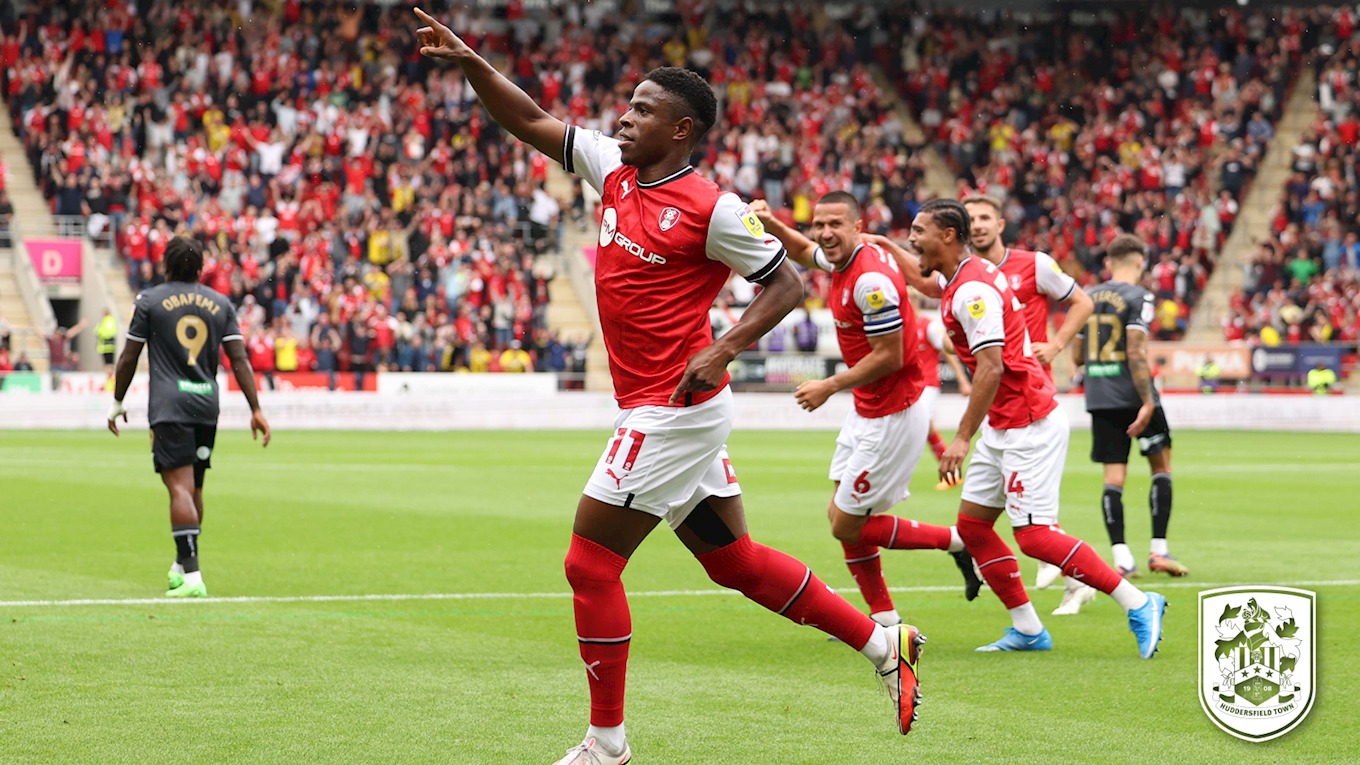 Town will be wearing their all-black away kit against Rotherham United on Saturday afternoon. 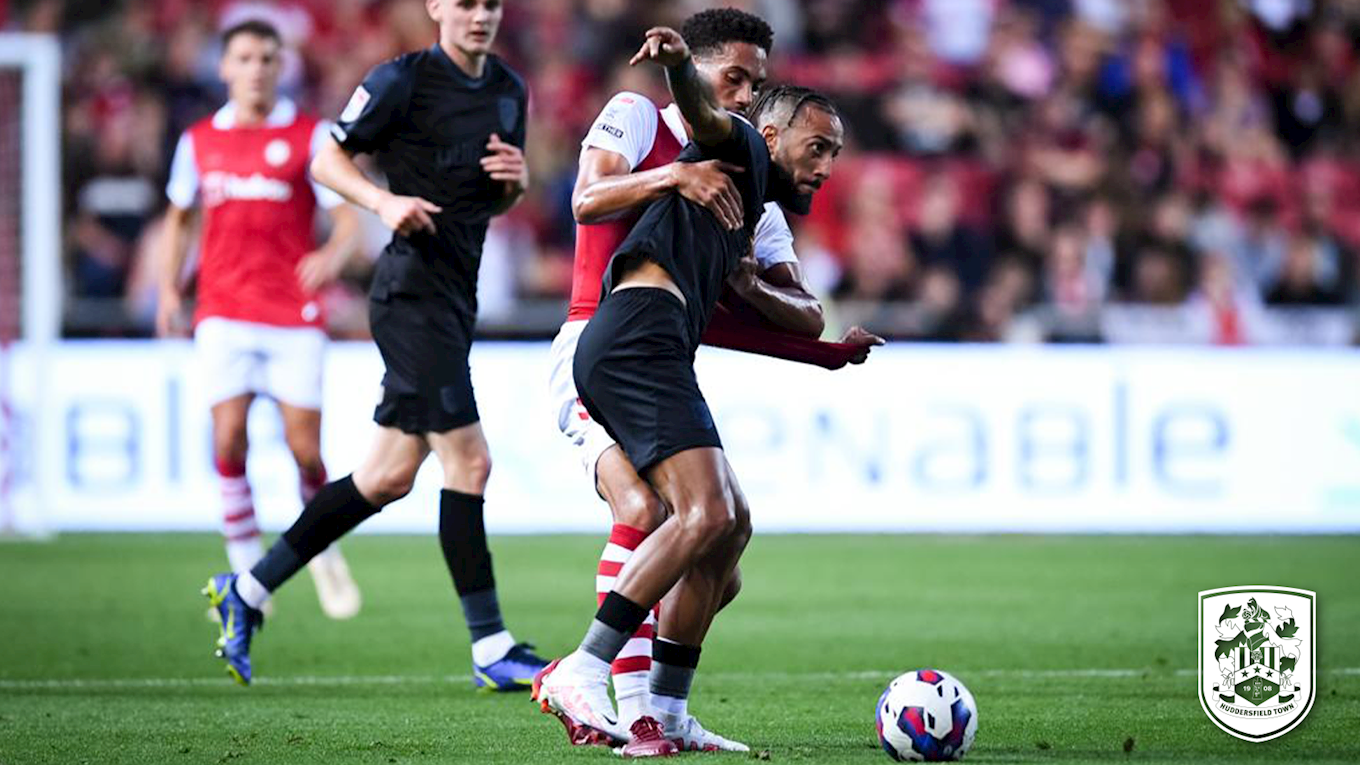 Tickets are on sale online until 2pm on Friday 14 October – CLICK HERE – and are available to purchase from the Ticket Office.

Rotherham United have confirmed that Pay on the Day WILL NOT be available at the New York Stadium.

All juniors must be accompanied by somebody who is over 16 and must be seated next to them.

Disabled Supporters should pay £14 for adults or their relevant price category with a companion ticket free of charge.

Saturday afternoon’s fixture will be broadcasted live on Sky Sports.

If you’re unable to attend the game on Saturday afternoon and don’t have access to Sky Sports, you’ll be able to listen along via iFollow HTAFC.

Defeat on the road for the Terriers

Town were beaten 2-1 by Rotherham United in the Sky Bet Championship on Saturday afternoon.

Goals from Conor Washington and Georgie Kelly meant that Rotherham United took all three points in the despite a goal from Danny Ward.

Town started off on the front foot after a Rotherham United mistake saw Jordan Rhodes intercept and collect the ball with plenty of space in the middle of the pitch. The striker sent the ball wide to Sorba Thomas, who took the ball down the left side and crossed to find the head of Ward, but it was defended well and headed out for a Town corner, which found Rhodes but landed safely in the gloves of Viktor Johansson.

This was followed by a free kick for Town in the fifth minute after Duane Holmes was brought down in the attacking half. Thomas’ cross found Rhodes, but his shot went across the face of goal and out wide for a goal kick to Rotherham.

The Millers had their first of three chances withing ten minutes to take the lead after a through ball was played to Conor Washington after he made the run behind Tom Lees with his shot deflected, and Ben Jackson carried the ball to safety before being fouled and winning a free kick in the defensive half.

Then, Rotherham’s defender Richard Wood followed this with a shot on target after the home side were awarded a free kick. The set piece found Wood’s head but was aimed straight at Lee Nicholls and was held to safety.

The third chance for the home side to take the lead came in the 20th minute as Ben Wiles had control of the ball in the Town box and crossed the ball for it to deflect off Michał Helik for a corner, but it was saved comfortably by the Town 'keeper.

Town got back into the game as Thomas received the ball in space and sent his cross into the box to find Rhodes, but the ball finished just behind the striker and it was cleared back to Thomas who took a shot from range which went straight at the ‘keeper.

Rotherham United’s first goal of the game came in the 25th minute after a through ball by Daniel Barlaser landed at the feet of Washington, who struck the ball nicely into the top right corner.

However, this scoreline didn’t last long as Town equalised in the 29th minute from a corner taken by Thomas. The set piece was played to Ward at the back of the box after he lost his marker, keeping his strike low and into the back of the net with his left foot.

The next action seen in the game was another chance for Ward following a long ball from Nicholls was pinpointed to Thomas, who had the time and space to cross the ball towards the back post, but the ball just missed the forward.

Just before half-time, Kasumu carried the ball into the box after receiving it from Holmes, and crossed intending to find Rhodes but the ball landed just behind him.

The second half started the same as the first one with Town pushing to go in front, with Ben Jackson taking the ball down the left side before cutting into the middle to take a shot from range which hit the target but was saved by Johansson – Rhodes found the back of the net with the rebound but the was ruled offside by the officials.

There was a chance for Town to equalise in the 59th minute as Holmes received the ball in the centre of the box but his shot was well saved.

Rotherham United’s second goal came when substitute Georgie Kelly got himself into space in the box and scored from close range following a cross from the edge of the box, with Richard Wood heading back across goal to assist.

The last action of the game came as Town substitute Jack Rudoni controlled the ball on his chest before he was brought down in the box, but the referee said no to the penalty shout and the game was played out for a 2-1 away loss. 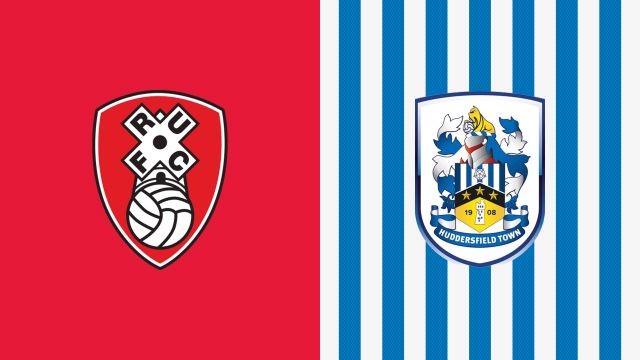 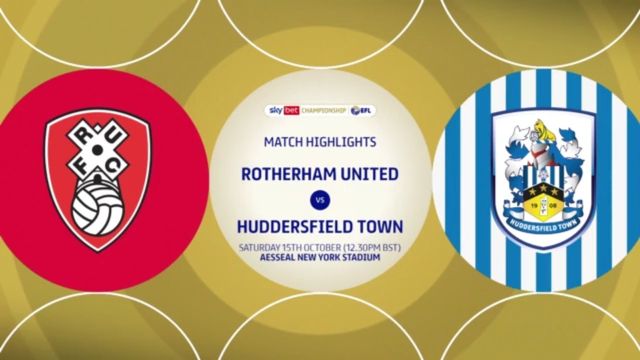 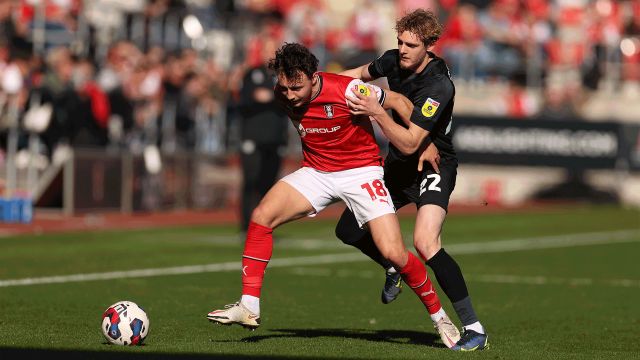