Huddersfield Town are back on the road in the Sky Bet Championship on Saturday 22 October when they travel to face Middlesbrough at the Riverside Stadium; 3pm kick-off.

The Terriers go into this game on the back of a 0-1 loss against Preston North End on Tuesday 18 October.

Middlesbrough come into this game looking to build on their 4-1 away win against Wigan Athletic on Wednesday 19 October and climb further up the table.

This is Middlesbrough’s sixth consecutive season in the Sky Bet Championship since they were relegated from the Premier League in the 2016/17 season, when Town were promoted to the top division.

Boro are looking for a new manager after parting ways with Chris Wilder at the beginning of October after losing to Coventry City, but continue working under Caretaker Manager Leo Percovich aiming to climb back up the table.

Middlesbrough currently sit 20th in the table after winning two and losing three of their last five fixtures.

The defender joined Middlesbrough from Sunderland in the summer of 2018 on a four year deal his contract was extended in December 2020. McNair came through the ranks at Manchester United and made 24 appearances for them before making the move to the Stadium of Light, where he went on to make 28 appearances in two seasons and scored seven goals. The Northern Irish International has made over 145 appearances for Boro and scored 13 goals since 2018. 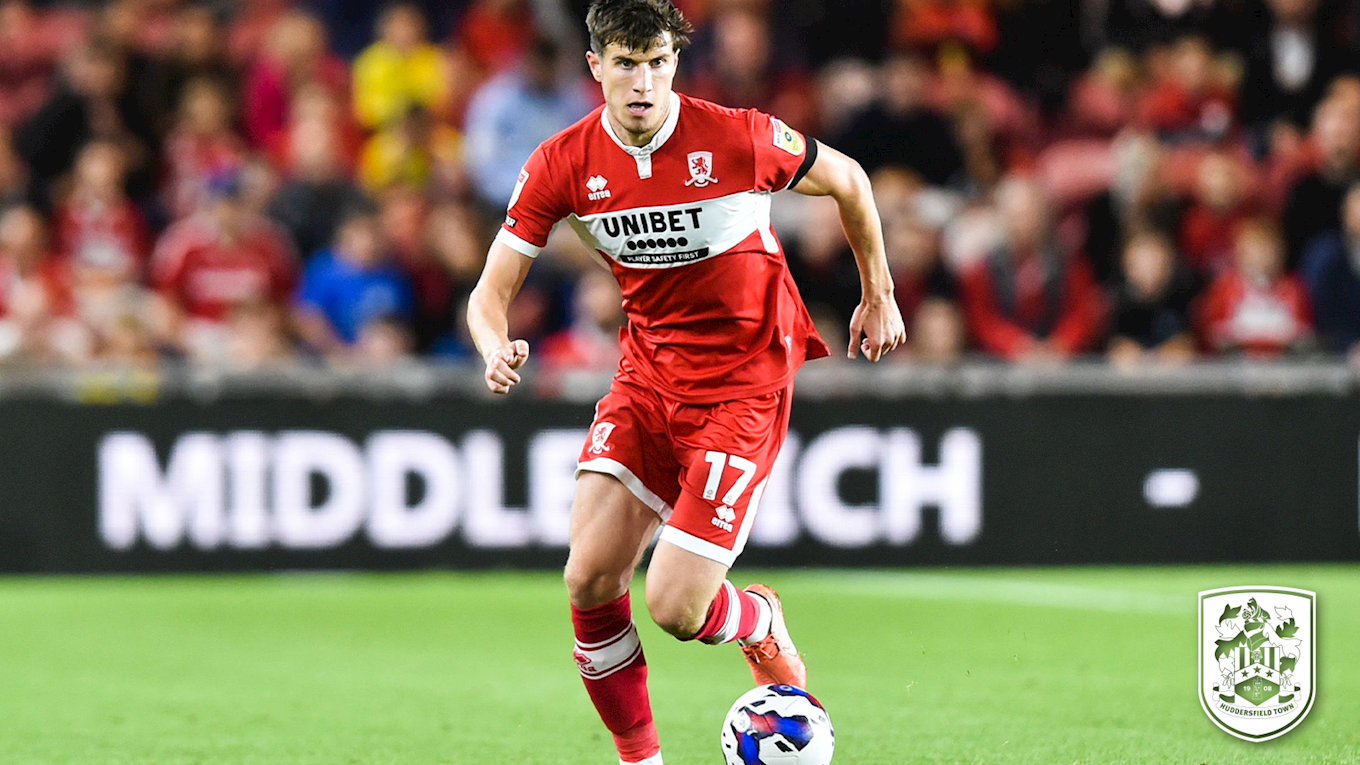 Yorkshire born, the midfielder’s youth career was spent with Manchester United before he returned to Yorkshire with the Terriers. Crooks made his senior debut at Town before going on multiple loan spells which saw him sign permanently with Accrington Stanley. The 28-year-old signed for Neil Warnock’s Middlesbrough in the summer of 2021 and scored on his debut in a friendly against Plymouth Argyle. This season Crooks has scored two goals and assisted two goals in his 14 appearances. 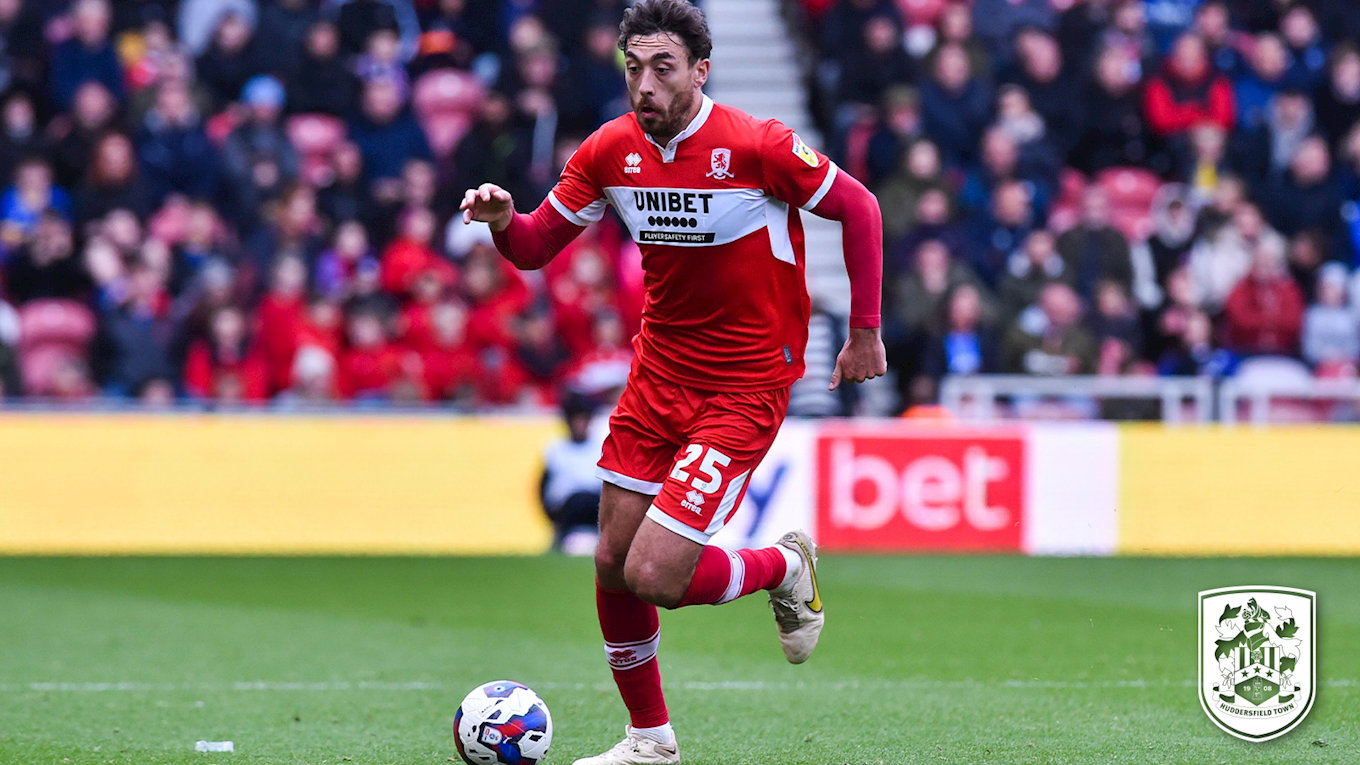 The forward signed for Middlesbrough on an initial short-term deal from Sunderland, but he committed his future to the club with a two-and-a-half-year contract in December 2020 after he was named Sky Bet Championship Player of the Month for scoring five goals in his first eight appearances for Boro. Watmore finished the 2020/21 season as Middlesbrough’s top scorer with nine goals. The 28-year-old already has four goals to his name out of 14 appearances so far this season, as well as one assist. 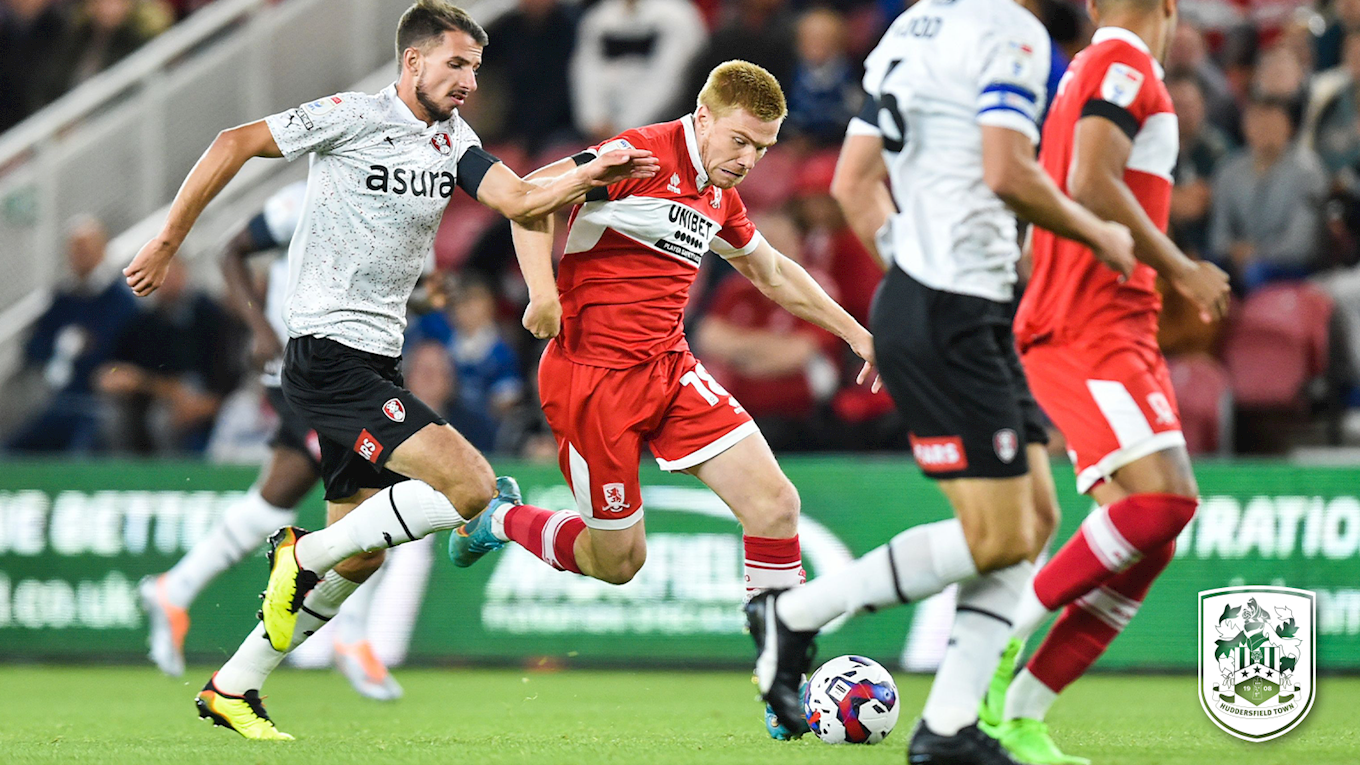 Town will be wearing their home blue and white stripes on Saturday afternoon at the Riverside Stadium. 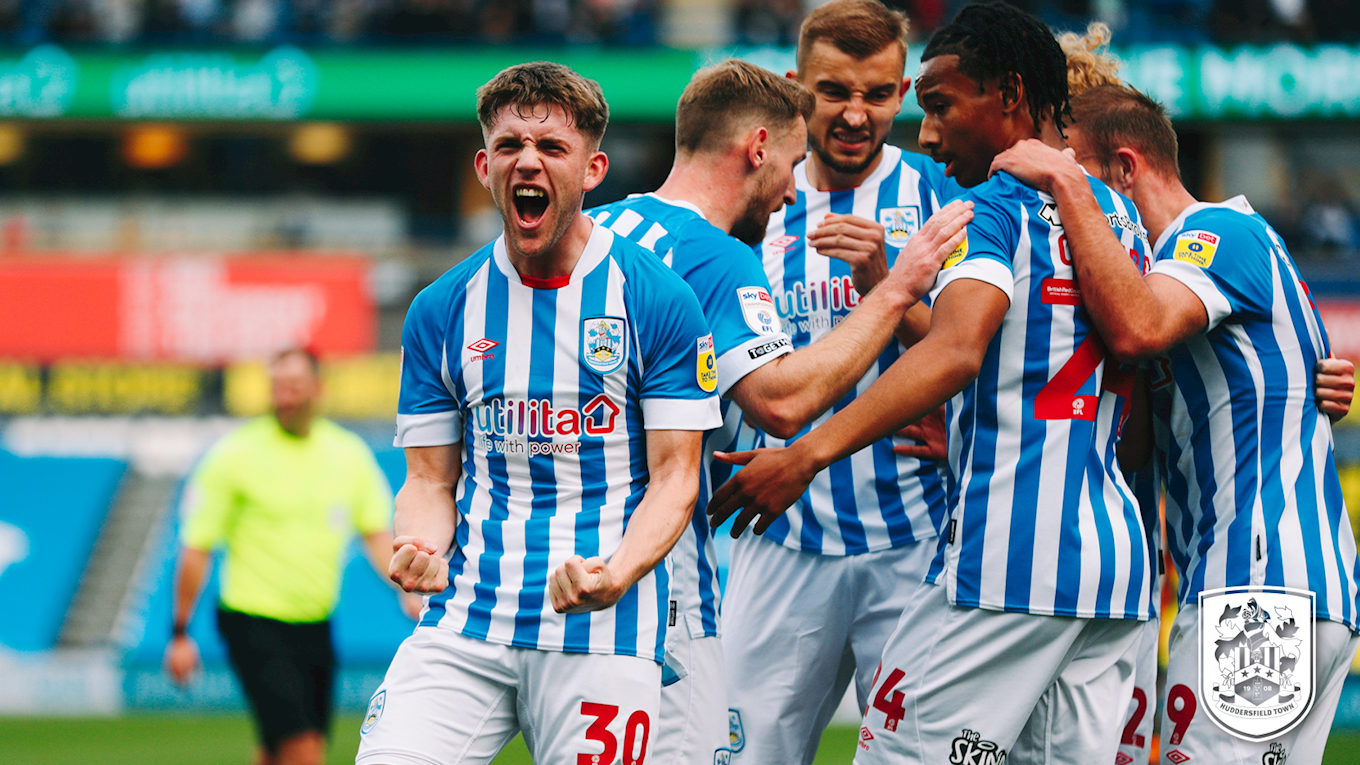 Tickets are on sale online until 2pm on Friday 21 October – CLICK HERE – and are available to purchase from the Ticket Office.

Middlesbrough have confirmed that Pay on the Day will be available at the Riverside Stadium from the away ticket office – please note that this is cash only as there are no card facilities in the office.

If you’re unable to attend Saturday’s game against Middlesbrough, you’ll be able to listen to the game via iFollow HTAFC.

A well organised performance earns Town a point on the road

Huddersfield Town took a point away from the game at Middlesbrough after a hard-fought afternoon at Riverside Stadium in the Sky Bet Championship.

A well organised Town side left Riverside with a point and a first away clean sheet of the season, whilst also having the best chances to take the lead.

Mark Fotheringham’s side showed their fighting spirit in both the first and second half of the Sky Bet Championship fixture.

The first action of the game came in the second minute as Middlesbrough put pressure on the Town box and were then awarded a corner due to Tom Lees heading the ball away from danger. Though the corner was taken well, it was defended strongly by Michał Helik.

Town followed this by Jack Rudoni, making his 100th start, closing on the Boro box after David Kasumu won back possession, but he was outnumbered by defenders and couldn’t find space as the home defence took back the ball and started on their counter-attack. This ended with Isiah Jones in the box with the ball as he prepared to shoot but Helik stood strong to deny any further movement from the forward.

Shortly after, Town had a second chance to go ahead as Sorba Thomas was found on the side of the box and he sent a low cross into in as he hoped to find Danny Ward’s right foot, but the ball went just behind him, and the chance was missed. This once again lead to Middlesbrough being on the counter-attack, which saw Jones send a cross into the box but Lee Nicholls held onto the ball comfortably.

Another great Nicholls save was seen after a corner was taken well for Boro, our shot-stopper got down to his left to deny the header from Dael Fry.

Duncan Watmore got the ball on the edge of the box but didn’t have the room to turn and shoot thanks to Ollie Turton. This sent the Terriers on the counter-attack and they won a corner due to the hard work of Duane Holmes. The initial corner was flicked out by Jonny Howson and the second corner from Thomas was direct on goal and deflected off the crossbar!

After Town held possession well for a while, the home side were in for a chance after Watmore once carried the ball into the box and tried to find the back of the net, but his efforts were denied due to the wall of our defence.

A free kick was awarded to the home side on the edge of the box after a foul from Kasumu, it was hit direct by Alex Mowatt but curled just past the post of Nicholls’ goal.

Thomas fancied his chances from range in the last bit of action from the first half, his shot from just outside the box following a Turton throw-in went just wide to the left of Zack Steffen’s goal as Town looked to go ahead before the break.

The Terriers came out in the second half on the front foot as Steffen had to make a double save within the first minute of restart. Rudoni’s shot from range was blocked by the Boro’s shot-stopper, so Ward went for the rebound, but this called for the second save to be made from the quickly recovered goalkeeper.

A great defensive tackle was made by Yuta Nakayama as Jones made his way to the penalty spot to take his shot – his pockets were picked, and he was denied the chance.

Town’s defence showed their strength once again as Turton put pressure on Boro substitute Rodrigo Muniz so his shot is hit high and over the crossbar.

The home side were awarded a free kick just outside of the box after a foul on Jones from Holmes, multiple chances are blocked inside the box and ball eventually goes wide of the goal.

A fast break from the Terriers saw Rudoni’s cross towards Town substitute Jordan Rhodes blocked and out for a corner, which Thomas stepped up to take – nothing came from this set piece.

A corner for Middlesbrough in injury time called for Town’s defence to step-up once again, great tackles from Nakayama and Rudoni denied the home side their chances to take the lead and the last chance of the game came from Marc Bola, who fired his shot from outside box and it went wide and Town leave with a point and a clean sheet. 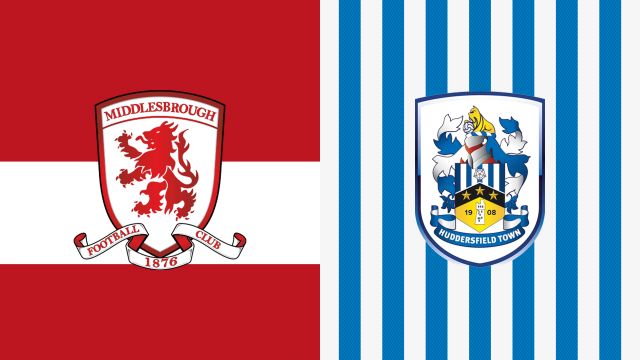 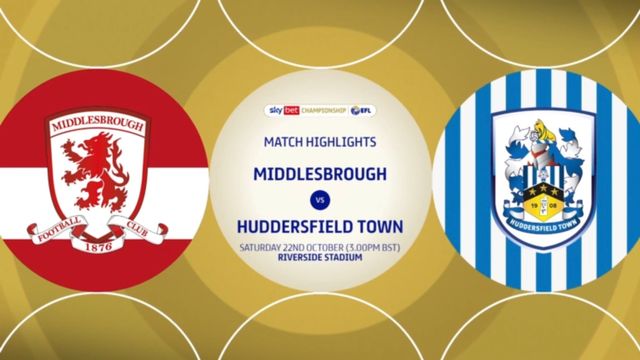 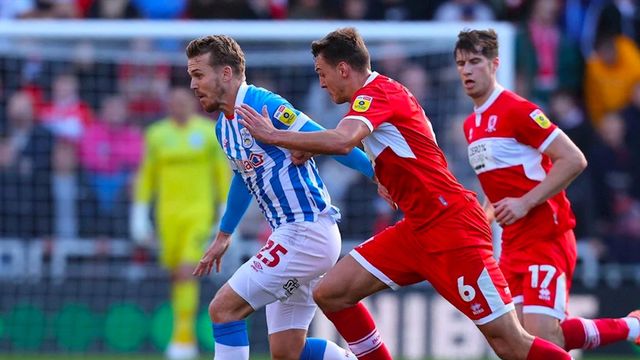