Huddersfield Town are back in Sky Bet Championship action for their first home game of 2022 on Saturday 15 January, when they host Swansea City; 3pm kick-off.

Town come into the game unbeaten in their last six league matches, with a 1-2 victory away at Burnley in the FA Cup last time out making it seven unbeaten in all competitions.

Swansea will arrive at John Smith’s Stadium having lost their last three Championship games, including a 1-4 at home to Nottingham Forest last time out.

Swansea currently sit 17th in the Championship, with as many as four games in hand following a COVID-19 outbreak within the Club.

Russell Martin’s men had lost three games in a row before the outbreak, losing out to both Nottingham Forest and Reading at home and Middlesbrough away. 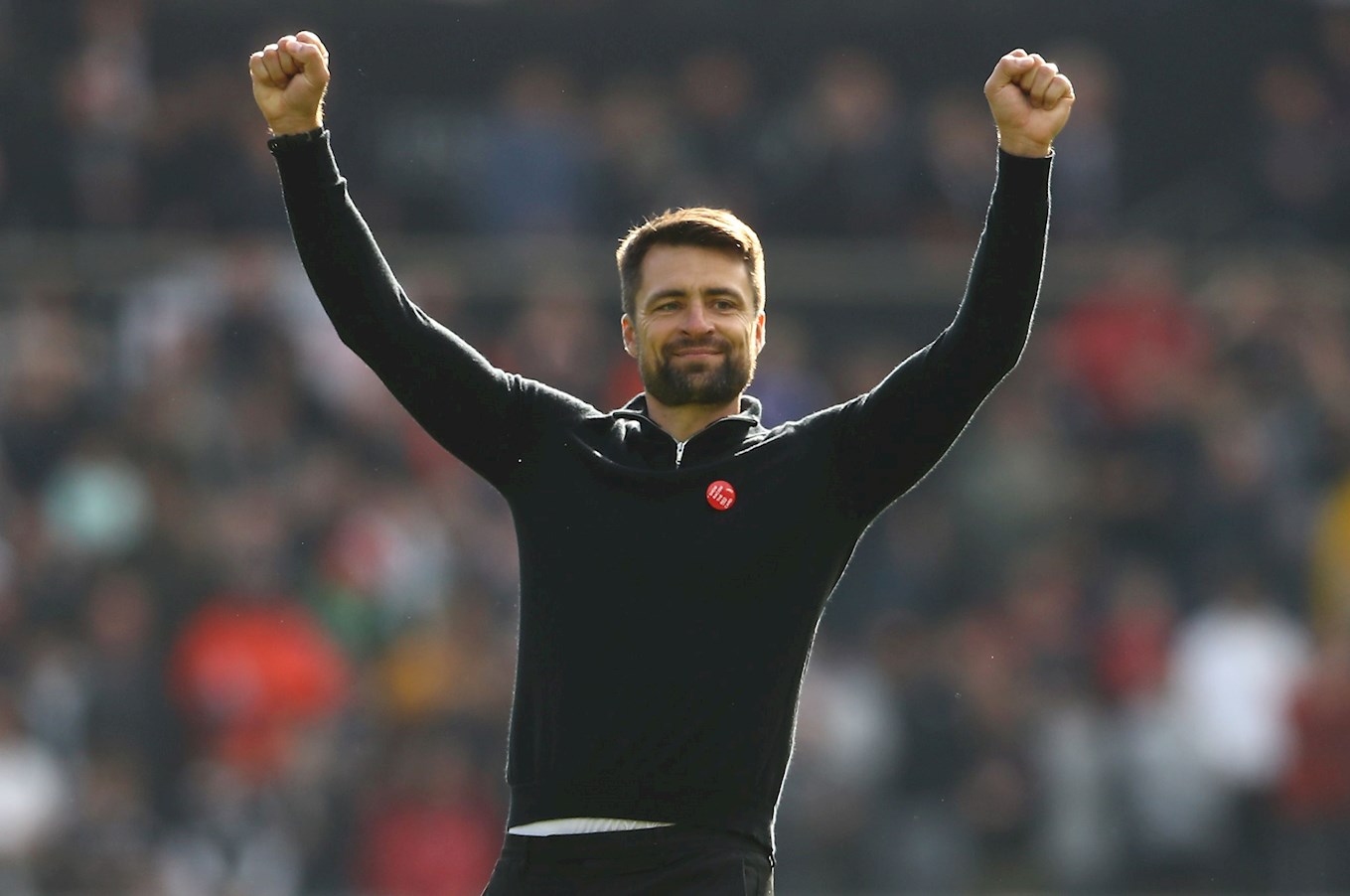 The Swans will also be looking to bounce back from FA Cup disappointment last week, where they went down 2-3 to Premier League side Southampton in extra time.

Swansea will be looking for their second victory of the season over Town, where a Joël Piroe goal was enough to earn the Welsh side all three points back in September 2021.

Cabango joined Swansea City’s Academy from Newport County in 2018. After working his way through the ranks, he made his First Team debut in August 2019. The 21-year-old has made 15 appearances so far this season, helping his side keep seven clean sheets. The defender’s performances have seen him called up to the Wales national team, where Cabango has played three times for Rob Page’s side and was part of the Euro 2020 squad. 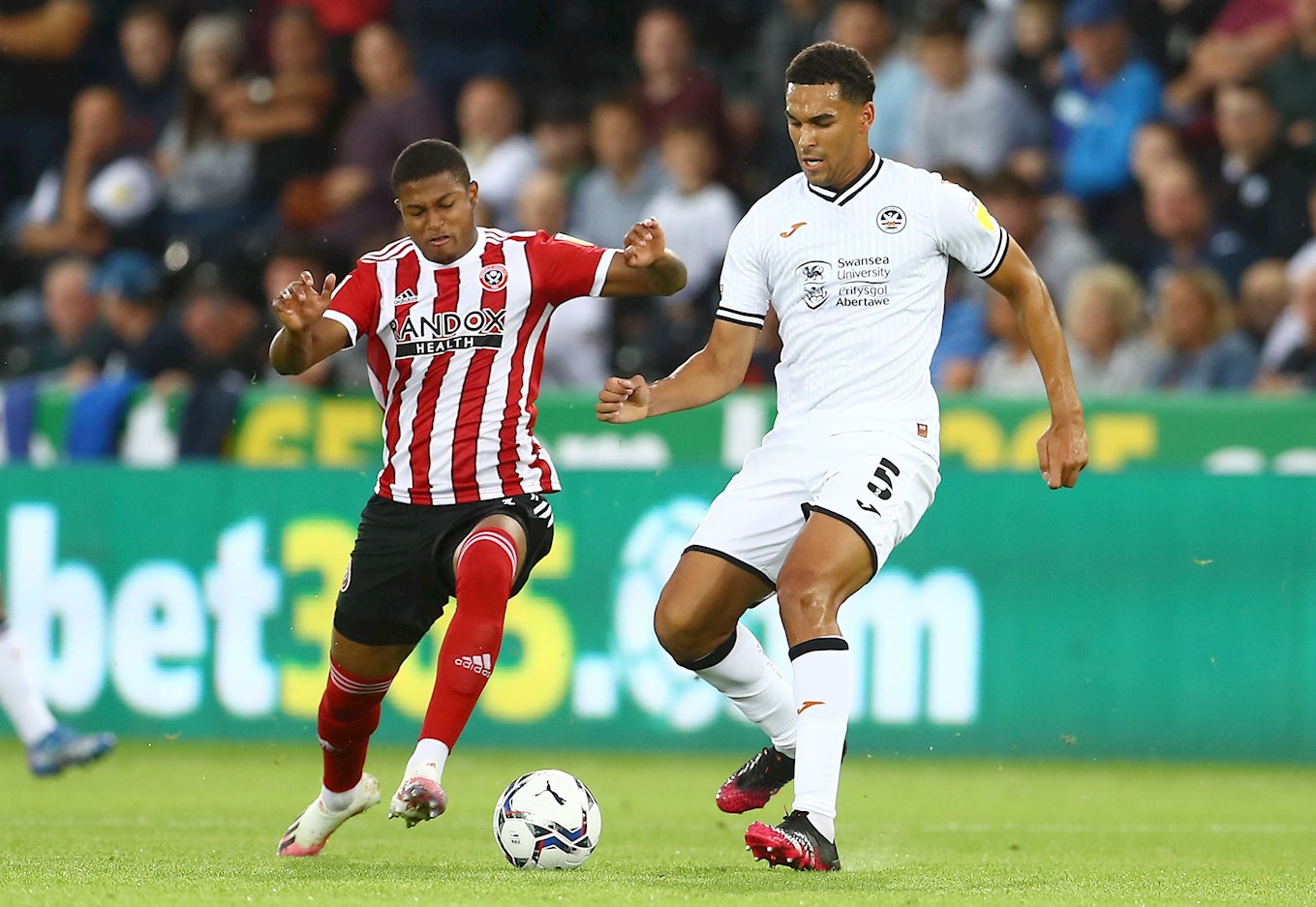 The 25-year-old signed for Swansea ahead of the current campaign, following several successful seasons in Scotland with Celtic. So far this season, Ntcham has featured in all but one Championship game for Russel Martin’s side, scoring three times and collecting two assists. The midfielder has represented France at various age levels, with his ability on the ball making him a valuable asset for Russel Martin's style of football. 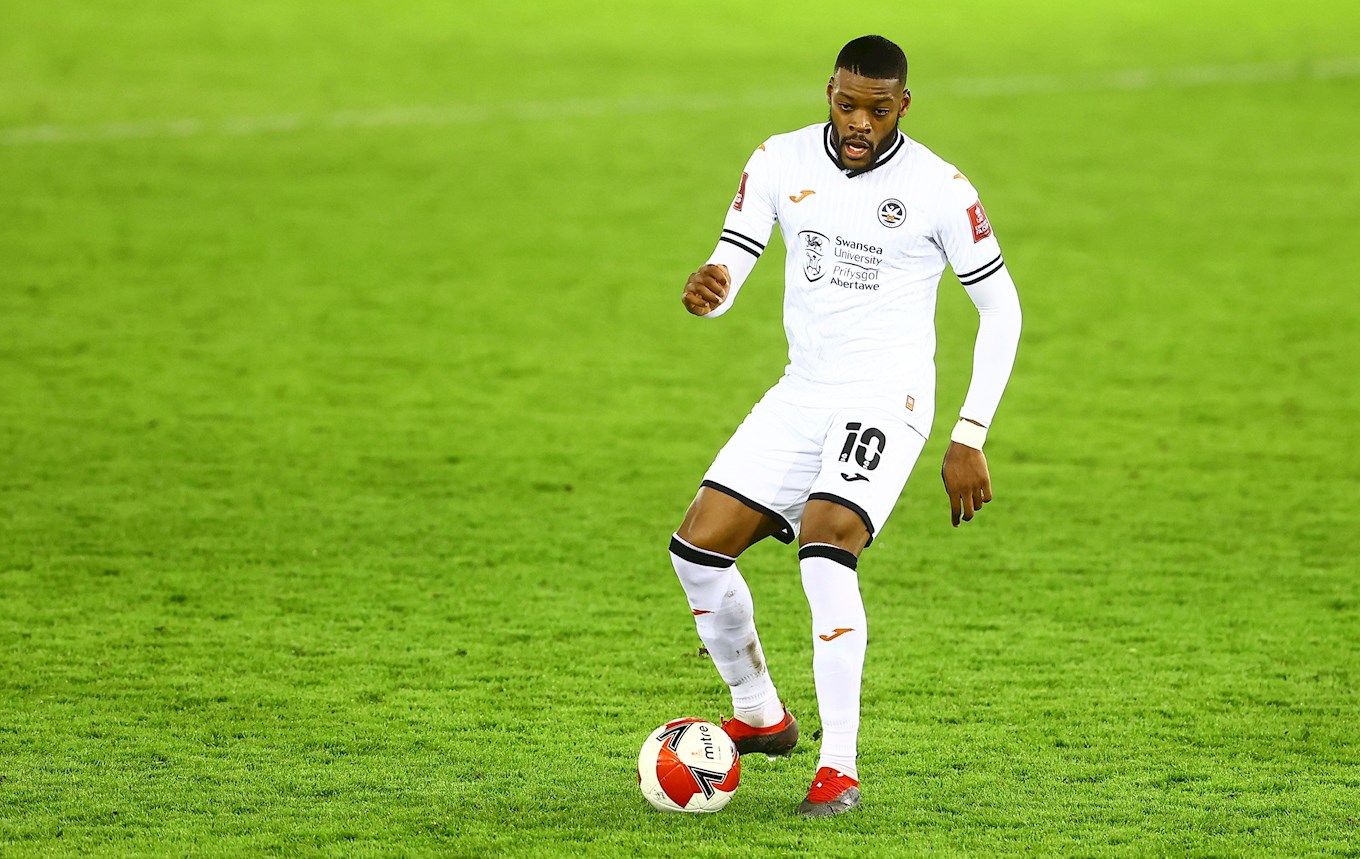 The forward has made an impressive start to his Swansea career having signed from PSV in July 2021. Piroe has had a flying start to life in the Championship, securing his place as the Club’s top goalscorer having scored 11 times in 21 appearances so far. One of those goals came on his debut in August 2021. The 21-year-old’s ability to convert chances makes him a constant threat to any opposition, so Town’s defense will have to stay switched on to keep him quiet. 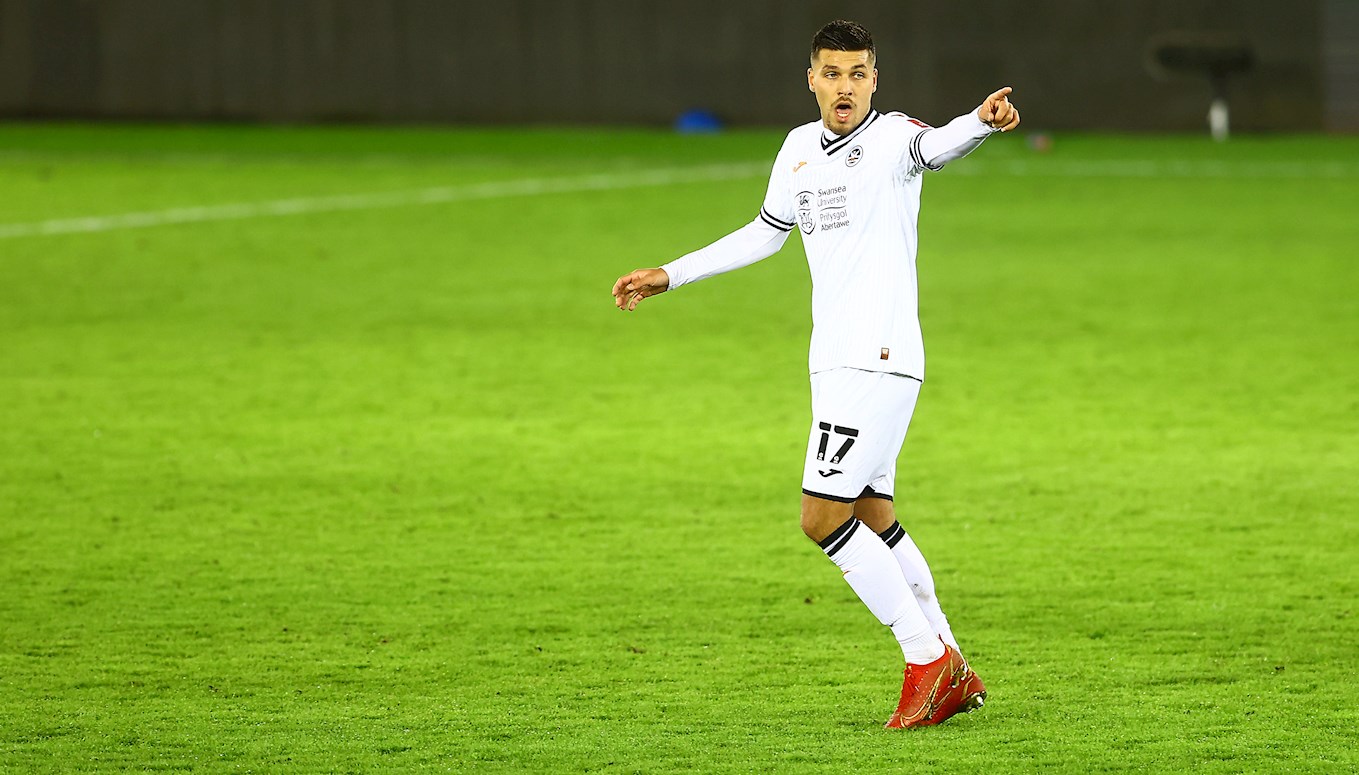 Town Head Coach Carlos Corberán gave an update on the fitness of his squad during his virtual press conference on Friday 14 January 2022, which you can watch in full via HTTV below.

The latest edition of HTTV's Preview Show is out now! This week's guests are former Town forward Iwan Roberts and The Examiner's Steven Chicken.

Town will be in our famous blue and white stripes on Saturday!

Tickets are available online – CLICK HERE – and from the Ticket Office.

All tickets are priced at just £5 across all age groups and all seats inside the John Smith’s Stadium!

Tickets are selling fast, so ACT NOW to secure yours in the best seats possible!

Tickets for wheelchair users are priced accordingly, with companion tickets free of charge.

If you are unable to attend the game, you can listen on iFollow HTAFC.

You can get yours before Saturday’s game by CLICKING HERE.

Huddersfield Town extended their unbeaten run to eight in all competitions as they drew 1-1 with Swansea City at the John Smith’s Stadium on Saturday afternoon.

The first time that Town have reached eight unbeaten since 2017, and it was by no means an easy feat, with the Swans piling the pressure on the Terriers to walk away with a well earnt point.

The Terriers’ first home game of 2022, they started the game the brighter of the two sides.

Lewis O’Brien tried his luck from range within the opening five minutes, but former Terrier Ben Hamer did well to deny him.

Just seconds later, Town had a goal ruled offside! Hamer did well once again to deny Hoggy from a corner, before Koroma turned it in, but from an offside position.

The Terriers’ promising start paid off in the 15th minute. Some great work from Danny Ward left O’Brien a strike on goal that Hamer could only turn into the path of Danel, allowing him to tap it in!

Swansea’s first chance of the game came courtesy of Ryan Manning. The midfielder caught the ball on the half volley, but Lee Nicholls was on hand to dive to his left and turn it around the post.

Hamer produced an unbelievable save as the clock showed half an hour to deny Town what looked like a guaranteed second! Sorba Thomas was played clean down the right, his cross found Lewis in the six-yard box, but Hamer denied him.

Moments later, Nicholls was called into action to get across to his right to deny Matt Grimes from distance.

It was almost the perfect start to the second half for the Terriers, with Ward getting right in Hamer’s face to block his clearance. The ball broke to Jonathan Hogg, but Swansea reacted well to win it back.

The 49th minute saw a HUGE save from Nicholls! A huge right hand save denied Cyrus Christie a goal on his debut.

Olivier Ntcham was the next Swansea player to try his luck, having a strike deflected twice en route to goal, but Nicholls was able to get down smartly to save.

A period of Swansea pressure followed, with the visitors working incredibly hard to find the chance that would give them an equaliser.

The visitors found it in the 78th minute, as Korey Smith squared for Flynn Downes to place into the far bottom corner.

Some excellent goalkeeping from Nicholls denied Swansea their second moments later. After denying Ntcham from range, our ‘keeper cut out a low cross from Smith across the box.

Town responded, with second half substitute Pipa getting into the box and squaring it for O’Brien, but his near-post shot was turned behind by Hamer.

Moments later, O’Brien was at the centre of the action again, doing superbly to get into the box with the ball. Unfortunately, his cross was too far ahead of his teammates.

Joël Piroe came incredibly close to sealing the win for Swansea in the final minute of added time, but thankfully could only nod his effort wide.

The referee blew the final whistle, seeing the points split at the John Smith’s Stadium. 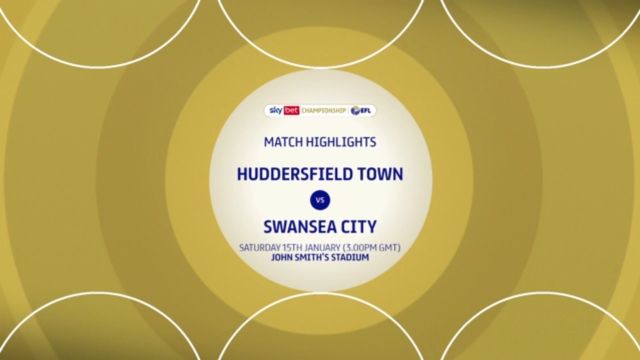 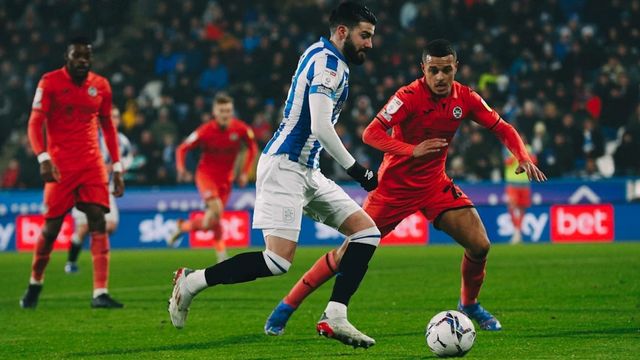