Huddersfield Town’s 2020/21 campaign kicks-off with the visit of Rochdale to the John Smith’s Stadium in Round One of the Carabao Cup on Saturday 5 September 2020; 3pm kick-off.

Off the back of this summer’s pre-season fixtures, Saturday’s game will be Carlos Corberán’s first competitive match in charge as Town’s Head Coach.

The behind-closed-doors game was originally scheduled to be played at Rochdale’s Crown Oil Arena, but the Lancashire Club requested to change the match venue due to pitch renovations at their home ground.

As is the same for all EFL clubs this season, the weekend’s first round tie will also see Brian Barry-Murphy’s side begin their season in Carabao Cup action.

The Sky Bet League 1 outfit will make the trip up to West Yorkshire as part of a busy opening week of the season on the road that sees them start their EFL Trophy campaign at Morecambe before they kick-off their league season at Swindon Town.

That trip to the Robins will be the first game of their seventh successive season in English football’s third tier following an 18th placed finish on the points-per-game system in 2019/20.

It means that this week there could be debuts for the Dale’s new recruits, having signed midfielder Alex Newby from Vanarama National League North side Chorley, whilst also bringing in young Irish goalkeeper Gavin Bazunu from Manchester City on loan.

Whilst the focus may have been on building up fitness levels in what was a shorter pre-season schedule than normal, Town now have some momentum building too off the back of a victory over Bradford City before an entertaining draw with Manchester United’s Under-23s at the weekend.

Like Town, the Dale have also made positive steps over their pre-season schedule, building up to Saturday’s opener with victories over Atherton Collieries, Stockport County and Oldham Athletic before a narrow defeat at Port Vale on Saturday.

The Irish defender is getting set for his second season in Rochdale blue having made the move across Lancashire from Bury ahead of the 2019/20 campaign.

Prior to that, the 25-year-old had come through the youth ranks at Scottish giants Celtic before going on to make 13 appearances for the Hoops at senior level between 2014 and 2017.

In 2019/20, his first season at the Crown Oil Arena, O’Connell featured in 31 of the Dale’s 34 league games – the most league games played by any of the Club’s defenders last season.

The central midfielder is currently in his second spell with the Dale having re-joined the Club back in January from Scunthorpe United.

Lund first signed for Rochdale in 2013 from Stoke City, scoring 22 times in 122 appearances for the Lancashire Club across four years.

Following permanent spells at Burton Albion and Scunthorpe United, Lund returned to the Dale in January, getting his first and only goal to date back in Rochdale colours against Rotherham United, shortly before the season’s curtailment.

Newby is one of the newer faces in the Rochdale dressing room having signed from Chorley on a free transfer earlier this summer.

Having found the net on 24 occasions across his 94 games for the Magpies, the 24-year-old has wasted no time in making an impact amongst his new teammates, bagging three goals across the Dale’s pre-season campaign.

After scoring twice on his debut against Atherton Collieries, Newby was also on target with the winner in a pre-season Lancashire derby victory at Oldham Athletic.

The Terriers have a good record against Saturday’s opponents, losing in only two of 25 previous competitive meetings with the Dale (W 13, D 10).

Saturday’s game will be the fourth meeting between the two sides in the Carabao Cup. The last came in 2001 as Town were beaten 1-0 at home. The two prior to that, however, ended in the Terriers progressing to the next round.

Our last competitive outing against the Lancashire Club came back in February 2017 when a debut goal from Collin Quaner, an Izzy Brown penalty and a second half double from Michael Hefele ensured a 4-0 win in an FA Cup fourth round tie at Spotland.

Town’s game against Rochdale is one of 13 ties to be played on Saturday in the Northern section of the draw with a total of 31 Round One matches to be played across the weekend, starting on Friday evening when Middlesbrough host Shrewsbury Town and Burton Albion take on Accrington Stanley.

Town Head Coach Carlos Corberán will provide an update on the fitness of his squad ahead of the season opener during his virtual press conference on Friday 4 September 2020.

The Terriers will wear the new blue-and-white striped home kit for the first time competitively on Saturday – CLICK HERE to get yours ahead of the new season!

With the game being played behind-closed-doors, Town supporters will be able to watch the game live on iFollow HTAFC by purchasing a Match Pass, which is available for £10. CLICK HERE to buy a Match Pass!

Unfortunately, due to the EFL’s agreement with Sky Sports, Season Card holders will NOT receive a free pass for Town’s Carabao Cup games.

Defeat in the Carabao Cup for the Terriers

Huddersfield Town were beaten 1-0 by Rochdale in the first round of the Carabao Cup at the John Smith’s Stadium.

Eoghan O’Connell’s header shortly after the break was enough for the visitors to condemn Town to defeat in this season’s competitive opener.

There was a mix of both youth and experience in the starting XI named by Carlos Corberán for his first competitive game in charge.

The Spaniard handed Town debuts to Academy graduates Romoney Crichlow and Ben Jackson who both impressed in pre-season, whilst 19-year-old Aaron Rowe made his first home start at senior level.

Crichlow lined up alongside Club Captain Christopher Schindler at the back, as both the skipper and Jonathan Hogg returned having not featured in either of Town’s two pre-season games.

Town’s final goal of that pre-season campaign was a stunner from Josh Koroma exactly a week earlier, and the forward looked to have an eye for goal again early on.

After some neat work in a tight area inside the penalty area, Town’s no.19 saw an effort at a first goal of the season denied by Rochdale ‘keeper Gavin Bazunu before the Dale’s man between the sticks was equal to another goal-bound Koroma strike from the right, moments later.

Koroma was the spark in a bright start from Town but it was the net at the other end that rippled first as Matty Done found the net following confusion in the Terriers defence, but the deadlock remained intact as the goal was chalked off for offside.

In the minutes after that scare, the Terriers looked to play with intent in search of that opening goal. Carlos Corberán’s side nearly got it just before the half-hour mark, as Harry Toffolo got the run on his marker and connected with Juninho Bacuna’s corner from the right but couldn’t quite keep his powerful effort down.

Town’s biggest threats were continuing to come down the right side as the game neared added on time at the end of the first half.

This time, Ben Jackson got into that channel, whipping a good ball across the face of the goal in the direction of Bacuna who miscued his effort over the bar.

Having gone into the break goalless, the visitors made the most of their first opportunity of the second half to go ahead.

Done’s in-swinging free-kick from the right found the head of Eoghan O’Connell who nodded past Ben Hamer in the Town goal to give the Dale the lead on 51 minutes.

Like in the first half, it was Koroma who continued to provide Town’s biggest threat on the Rochdale goal.

In search of an equaliser, the forward tried his luck from a central area, but his curling effort just went wide of the post.

With the minutes continuing to tick down, the visitors sat deep and stifled Town’s attacking output as the Terriers went in search of the equaliser.

The Terriers did have opportunities late on, however. As the game entered stoppage time, Isaac Mbenza stung the palms of Bazunu with a powerful drive, before Toffolo’s header was cleared off the line from the resulting corner.

That was the closest Town came with referee Ben Toner blowing the full-time whistle shortly after, confirming Town’s exit from the Carabao Cup in Round One.

Next up for Town is the Sky Bet Championship opener against Norwich City at the John Smith’s Stadium on Saturday 12 September 2020; 3pm kick-off. 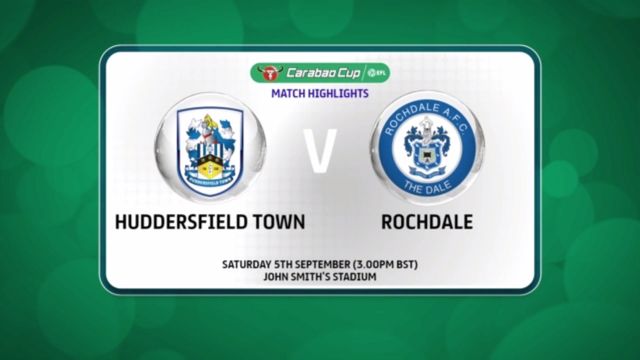 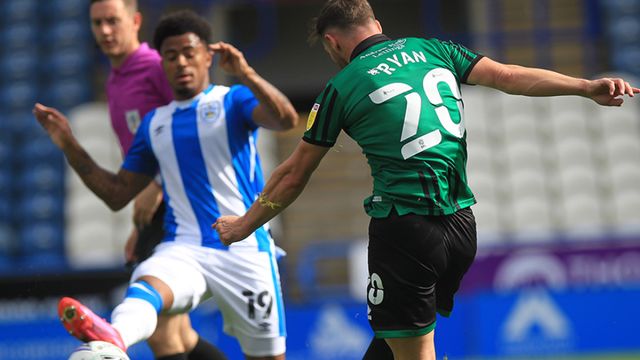